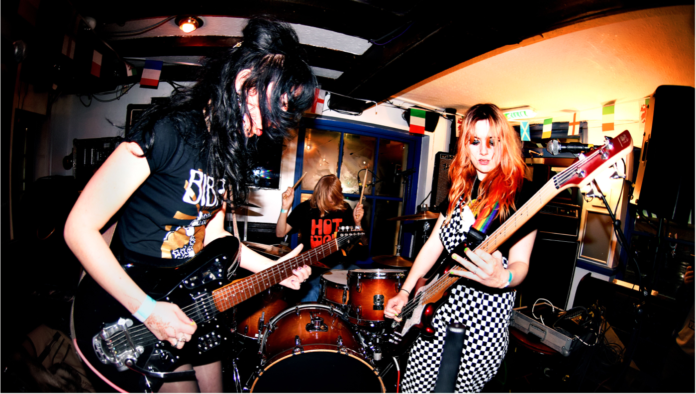 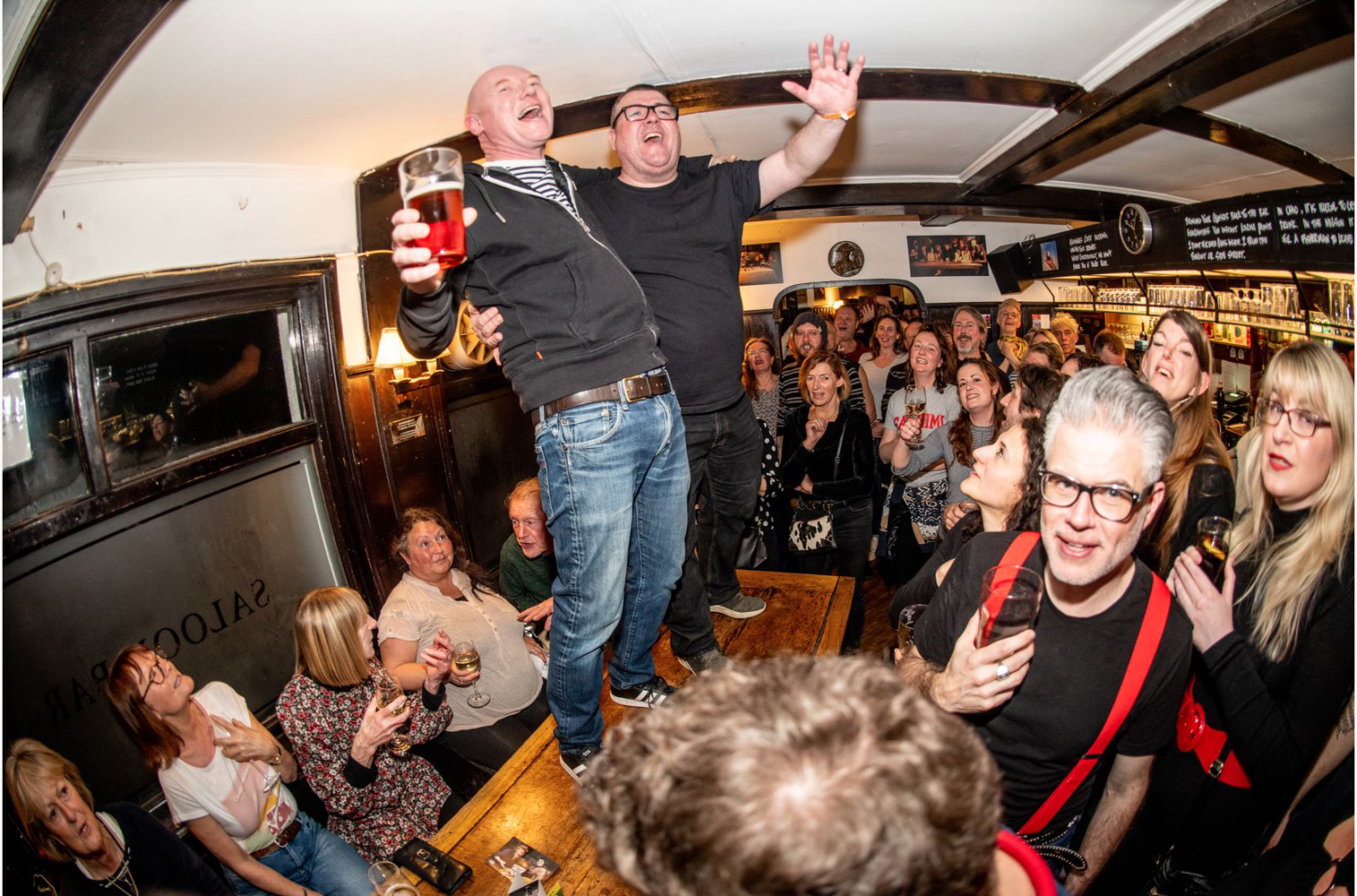 It’s all about making things happen.

Fat Tuesday Festival in Hastings is now in its 13th year and its transplant of the New Orleans legendary Mardi Gras (French for Fat Tuesday, fact lovers…) event into the seaside resort of Hastings is helping drive that town towards a new salt-stained music future. Like New Orleans, there seems to be a musician on every corner that is creating a new tradition on the coast that is fast-tracking Hastings into one of the unlikely music epicentres in the UK.

With a mix of cutting edge music, theatre, dressing up and a big mad parade through the streets, Fat Tuesday is a five-day event that is a celebration of a Hastings that is fast becoming this artful bohemian enclave of the UK. The faded Hastings of years ago is still there in the corners and there are pockets of stubborn poverty, but many of the seafront regency blocks are freshly painted, and its now the kind of town you bump into people you have not seen for a long time who have moved here to create.

The brainchild of Adam Daly, Fat Tuesday somehow ties all these loose ends together and showcases the music and the town with up to 40 venues. Using a diverse selection of spaces, from the grand backdrop of the White Castle Theatre, to St Marys in Rock theatre that is carved into the cliff front, to the never-ending twist and turns of bars on the old town high street, to the smallest pubs, cafes and bars are stuffed full of music and madness. It’s a mixture of fun and a platform for many touring bands as well as the great young bands in a town that has already been a springboard for the recent success of Kid Kapichi and, hot on their heels, Blabbermouth and Hotwax making a strong case that Hastings is really happening; and Fat Tuesday is a big part of this.

The opening night on Thursday is the grand ball in the White Rock theatre that sees a multitude of fancy dress and garish good time dayglo fun. It still has the flickers of that post-rave culture where acid house became entangled with theatre in the post traveller world and everyone is dressed to the nines in a mixture of Edwardian pomp, sawn-off Mad Max styles and bohemian splendour. The stand out live set comes from the Manchester and Calder Valley-based band Mr Wilson’s Second Line, who dress like a Sgt Peppers Lonely Hearts club band and play various brass instruments with a drummer who has his kit on a wheel. It’s kinetic and fun but also really effective. The deep grunting sax holds the bass down and the rest of the brass textures and layers the party sound with a New Orleans swing. They are kinda like the acid brass thing and their set includes surprisingly effective covers of The Prodigy’s Fire Starter and New Order’s Blue Monday. The 10-piece The Future Shape Of Sound claim quite accurately to be a ‘Rock’n’Roll Crime-Gospel outfit’ and whose gospel circus blues fits like a big band leader’s exquisite white glove, and the night is brought to a long and messy close with a  DJ set from Horse Meat Disco.

Saturday afternoon Mr Wilson turn up again to busk outside the seafront Albion pub which is a great space (great vegan dinner)  and the hub for so much that is going on in the town. Roger Daltry is standing outside the pub and bands are popping up in the street busking sets. Kid Kapichi jump out of a car driven by a Nova Twin – it’s like a conveyer belt of the new wave of British bands who will dominate the landscape in the coming years.

Hot footing it up to St Leonards, where many of the locals find the one mile wander into Hastings an epic and long journey, a micro scene is thriving. Its high street has its own clutch of bars and hip spaces in the fast-changing seaside landscape. On the Saturday afternoon Aircooled play in some tight backroom space and announce their arrival to the world with a great hypnotic set of krautrock fused with electronica. The trio is built around Justin Welch (Piroshka, Elastica, Suede and Oliver Cherer (Gilroy Mere, Dollboy, ATL etc.) with Katherine Wallinger on bass who is a great player and lost none of that idiosyncratic four-string style and sumptuous cool. There is a spark of creative energy about the band and so much potential to turn this into something serious.  Saturday ends with Magic Numbers exquisite harmonies and classic chords and feel-good guitar at The Brass.

Preservation Sunday is time to kick back and get immersed in the subterranean ambient lair of the former circuit venue, the Crypt, where the spaced out lysergic sounds merge electronica with trad trips music and into a trifle of hallucinogenic mind boggles. Before entering this space and time portal, the Umbrella parade have gallivanted through town, where the Fat Tuesday sense of spectacle saw an almost steampunk with added full-colour palette parade along the seafront with each one twirling an umbrella.

Or add stock to the potent brew.

One of the cool things about Fat Tuesday is that it’s wildly eclectic. One minute it could be post punk in an organic tea room and the next it could be dirty acoustic blues in a packed salty pub at the trawler end of town. Unlike many seaside towns, Hastings still retains its own micro fishing fleet but with its own twist with the iconic tall sheds to dry the nets hugging the beach by the old town. Just back from the harbour and up the winding street where you can still smell pirates and hear the clatter of Long John Silver there is the The Lord Nelson pub – the kind of barnacle-encrusted hole that was once part and parcel of British life but sadly only seems to survive in places like this. It’s Monday night and the rains have come but the venue is seriously packed whilst local legend King Size Slim delivers his charismatic blues in his first set, followed by an off kilter reggae set with virtually the same double bass, acoustic guitar and percussion as the blues manoeuvres. The charismatic bearded Tom Waits-kinda guy is one of those people whose lived in face tells a thousand stories, and his croaky compelling vocal delivers them one by one. Some people seem to have the music flowing out of them like the beer in the taps of the nearby having bar, and like some kind of UK version of Seasick Steve King Size Slim puts the edge into authentic. 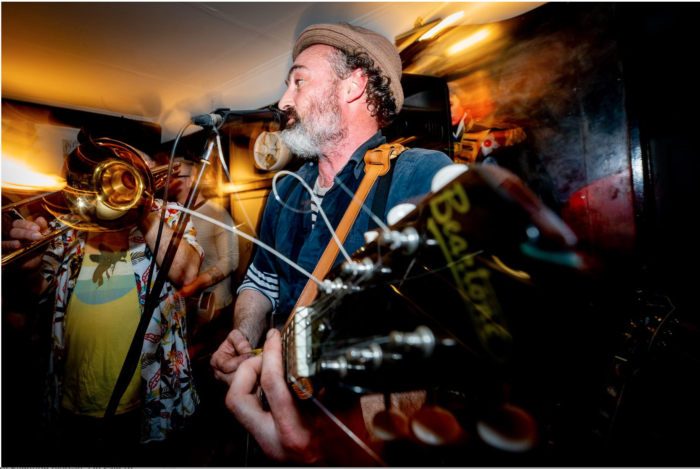 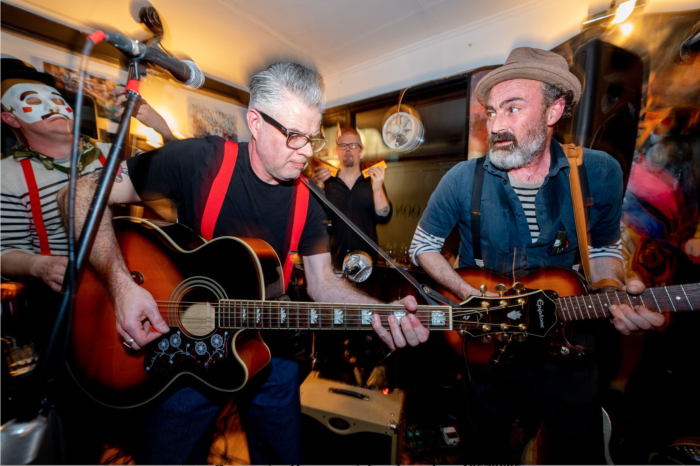 And finally the Mardi Gras has arrived. Fat Tuesday night time tour is the big one. There are so many bands playing that it makes sense to hold the fort in one venue…I’m in the Carlisle Pub on the seafront – a bikers pub that has punk and rock gigs on and is the classic hard-working, good times, slightly battered around the edge spit and sawdust venue where reputations are earned.

Dubinski have travelled all the way from Edinburgh and have risen from the ashes of their former band, Ded Rabbit, with a set so tight it’s ridiculous. Delivering the kind of spiky Britpop with a large dollop of punky new wave, they are like a Steve Lamacq band come true. Full of spiky hooks and cheeky riffs the band are a rush of energy and a brawl of tuneful ideas.

Murderers Are Optimists are fascinating. They play an intense lad rock but with a heavier edge driven by the be-scarfed mod-ish singer’s vein busting intensity and the animalistic gonzoid performance of the aptly named bassist, Jo Gonzo.

It’s utterly compelling to watch. A genuine frenzied delivery with hard-driving catchy political songs that also have somehow found their own niche. Is this because Hastings is a relatively isolated place 90 minutes on the train from London? It seems to breed bands that have somehow ploughed their own furrow and play their own take on indie and rock without the constant reference to ‘how it’s meant to be done’, and this makes them all the more stronger.

Within minutes of their very physical performance cleared off the stage, three 17-year old girls from Hastings are mesmerising us with their stunning music. Hotwax are ripping up the template and ripping up stages with a thrilling deconstruction of their grunge roots into a post-punk landscape.

Hotwax are so of the moment that it hurts. 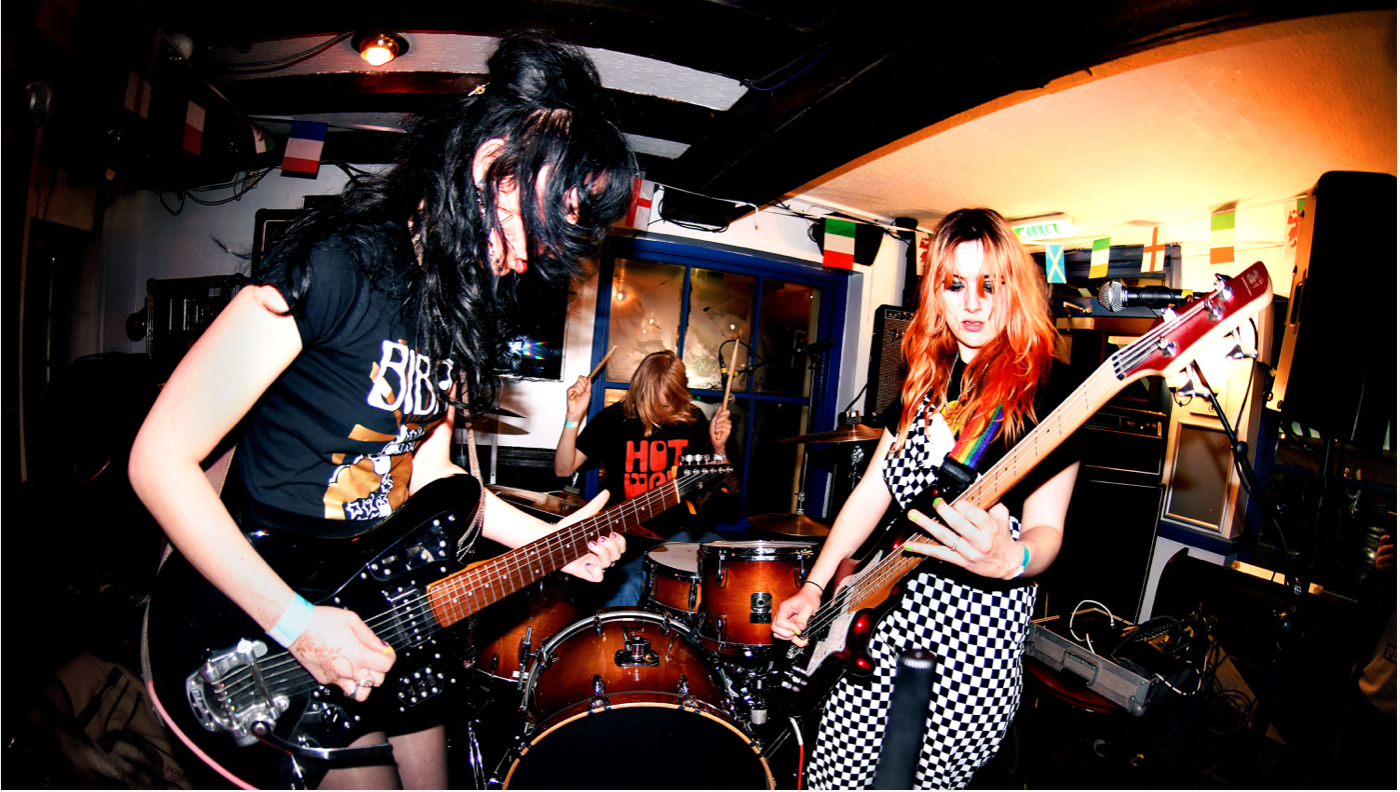 For sure there are still the intense anthems with huge choruses dealing with life, like on their upcoming single that roars like Hole did a long time ago.  The band deliver their songs of modern-day girl life shouting back at the stupid world and standing up for themselves in the grand old tradition of female grrrl power. They have the firepower of the grunge pioneers but there are also many moments of reinvention where they create their own sonic landscape. This is what makes Hotwax startlingly important. They strip away the noise with an inventive brilliance. There is a post-punk adventure where they take a song down to a clipped hi-hat or another that is built around an inventive bass. They break the norm and their music is full of surprising and effective twists and turns that somehow manages to create a new landscape in guitar music.

The band’s musicianship is off the scale – the bass is doing things I’ve never heard before, the guitar switches pedals to create nuance, tension and texture, the drums keep the power but never do the obvious thing and the vocals are thrilling and from the gut.

Just when you thought everything had been done someone comes and reinvents the wheel yet again.

Hotwax are the latest new future in the new century music narrative.

Blabbermouth have been reviewed on the site before in 2020 when we saw a band on the edge of a breakthrough. The pandemic got in the way but, now with local buddies Kid Kapichi very much in the ascendancy, they are next in line for the breakout. They have not been wasting time and in 2022 they have now turned themselves into a  well-oiled indie rock machine. The vibrant good time rush is in that hinterland between indie anthem and foot pedal stomp of Queens Of The Stone Age if they had been brought up in an English seaside town instead of the deserts behind LA. Their songs are catchy and running on high octane full-throttle adrenalin fuel. The venue is in meltdown and the mosh pit stretches to the back door. The band have the songs, the swagger and the style to own a big stage slot at a Reading type festival and are on the cusp of the big hungry beat break out.

The night never seems to wind down as we hunker down in The Brass where Buddha Triangle are dealing their mix of hip hop, ska and high octane brass to a crowd that is squeezing every last sinew to party again. As the venue finally shuts even the circling dawn seagulls look knackered as Fat Tuesday murkily slides into  ‘Normal Wednesday’ where the real world floods back.