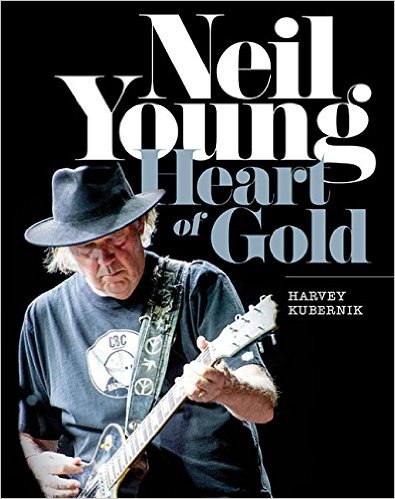 Harvey Kubernik is acknowledged by many as one of America’s finest music critics and authors, and here he examines the long and wide ranging career of rock behemoth Neil Young, from the very early days of the Canadian boy being electrified by seeing Elvis perform on The Ed Sullivan Show and later the Beatles and then the aspiring young musician’s time in short lived outfits like the Squires and the Stardusters before his creative successes with Buffalo Springfield; Crosby, Stills, Nash & Young; Crazy Horse and his solo years right through to recent tours and albums.

Among those whose views on Neil are featured are Robbie Robertson, Nils Lofgren, Ian Hunter, Kim Fowley, Clem Burke and filmmaker Jim Jarmusch. Young himself has also been interviewed by the author over a long number of years and refreshingly forthright he can be too. As one example, according to Young: ‘Woodstock was a bullshit gig. We [CSNY] played fuckin’ awful. No one was into the music.’

With this kind of mindset, maybe no one should have been surprised by his take on the rise of punk, Young being one of the relatively rare hippy generation artists who possessed a healthy perspective on the shock of the new, arguing that the good thing about the punk/new wave bands was that they weren’t taking themselves seriously: ‘People who make fun of the established rock scene, like Devo and the Ramones, are much more vital to my ears than what’s been happening in the last four or five years.’

This attitude is one of the things that incline you admire the man, even if (like me) you aren’t a massive fan and as Andrew Loog Oldham observes, you also have to applaud the manner in which he has overcome adversities in his life such as Polio and epilepsy, which the former Rolling Stones manager believes was a factor in driving him on and on. ‘I think for a suburbanite from Toronto, who lived next door to a chicken farm, Neil Young did remarkably well.’

There are some neat details and anecdotes throughout, like his old buddy Denny Bruce revealing that the song Expecting to Fly had been written for the Everly Brothers but that producer Jack Nitzsche on hearing it immediately declared: ‘Never mind the Everlys. This is for Neil Young, We can make a great record.’ Not long afterwards, with Bruce, Young and Nitzsche all considering relocating to London, a phone call to Mick Jagger resulted in the English singer telling Nitzsche how many of his music business pals loved Expecting to Fly, including one Graham Nash.

And speaking of Nash, he explained recently to Kubernik his thoughts on the addition of Young to the ‘hydra-headed enticement’ of Crosby, Stills & Nash: ‘It was a different band when Neil joined… And not a lot of people understand that. They think it’s just an added voice. But it’s not. It’s an added attitude. Neil brings a sharper edge.’

That sharper edge is still evident in his work and he retains the capacity to confound the expectations of even long time admirers, such as when he decided last year to record an entire album, A Letter Home, in a refurbished 1940s Voice-O-Graph vinyl recording booth at Jack White’s Third Man Records studio in Nashville – the Voice-O-Graph being a ‘long forgotten curio used to send voice postcards to friends and family.’

So, a very well written and well designed book that also includes a very thorough discography cataloguing everything from a 1963 single with the Squires to 2015’s The Monsanto Years. There’s also a couple of hundred photographs, some of which are previously unpublished and all carefully chosen and the book is interspersed with a year by year timeline that acts as a quick reference point for major events along the way.

Neil Young fans are unlikely to be disappointed.

For more on the book visit the Omnibus Press website.