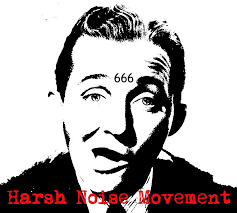 Louder Than War’s Ioan Humphreys has a quick Q&A with a prolific maker and distributor of noise / harsh noise.

For the last few years I have been fascinated by harsh noise and what exactly drives the people who make it. Who do they think their audience is? What do they think their pieces of art mean? And do they think that people would genuinely pop a harsh noise CD on in the car and listen to the whole thing on their way to their weekly big shop in Lidl? I really don’t know, and as this is an ongoing preoccupation of mine, I certainly don’t have any answers yet. However, I recently disappeared down the vast and incredibly fertile Twitter rabbit hole of the world of harsh noise where I came across Harsh Noise Movement. After a few bits of correspondence, I finally got around to posing some questions to Adrian Rowe AKA Harsh Noise Movement to hopefully get closer to understanding this music genre. Enjoy. I did!

Louder Than War: Hi HNM. Where are you? What are you doing right now?

Harsh Noise Movement: At the moment I’m in the United States, drinking a cup of coffee, having a cigarette and pondering the mysteries of life, well, actually no, I’m watching that god awful Ghost Adventures on TV! Hahaha!

LTW: Tell me about Harsh Noise Movement. Who are you? What is HNM?

HNM: Well, HNM is just me, Ade Rowe. I’m from a little town in South Wales, which I will be still living when I return to the United Kingdom. I have been making noises and experimental sounds ever since around 1984, First of all it was just experimenting on tapes. Recording weird sounds, looping beats, and things like that. I was pretty young at the time, but music and sound has always been my passion from as far as I can even remember. As I got older, the noise elements of the experiments became more present and eventually progressed into what is now called harsh noise. HNM is my experimental / noise project which I started in 2015. I like to experiment with many different styles under the HNM moniker, and it is the project I have stuck with the longest so far.

LTW: HNM is very much involved in the noise / harsh noise movement happening right now. What do you think is the reason for the current movement of noise? Is it a reaction against something now? Or has it always been there? Socio-political maybe?

HNM:  You only have to hear what is out there in the mainstream to figure out why people want to listen to something more adventurous and interesting. There is so much trash being pushed into people’s eardrums in the name of music these days, it’s been like it for a long time, and, I think, people are getting sick and tired of the same generic bullshit and are looking for sounds that they can delve deeper into, and that is where noise comes in. There is so much going on within the layers of sounds. Many things that you can here with each listen. It’s like an endless pit of creativity. Socio-political? Well, I personally think it is a reaction against many things in society, mainly a reaction against boring, half-arsed popular music.

LTW: The noise scene could be seen in some quarters as niche? Do you agree?

HNM: It is an acquired taste for some people. The noise scene is underground. Of course you have the projects like Merzbow, that gain a wider audience and then that encourages more people to find similar sounding artists. That is a good thing, in my opinion, but noise will always be underground, and that is where it will remain, because it has remained that way for a very, very, very long time.

LTW: Formats such as cassette releases seems to be prominent in HNW and other noise circles. Is this format a commentary on the content? Or an exercise in keeping a well-loved format alive?

HNM: Personally, I prefer CD and vinyl, but I have always had that preference when buying albums or singles. Cassettes do have a nice warm deep sound and I am not opposed to them at all. Yes, it is probably in keeping a well-loved format alive. Nostalgic. DIY.

LTW: What are the long term goals of HNM, if any?

HNM: The HNM project is on hiatus at the moment. But I aim to bring it back at the end of the year and make even more brutal and ear shredding noise. It’s more of a break than anything. I have been working on HNM constantly for the past 3 years or so. Every day, non-stop, so now I think I deserve a little breather. Hahaha.

LTW: You’ve mentioned Awkward Geisha in correspondence. What is AG and how do they fit with HNM?

HNM: Awkward Geisha is the future of music. It is my baby. The most loved project of all. Awkward Geisha is an avant-garde free improvisation ensemble which I founded in 2016. It consists of many talented musicians from all around the world, who record, and send me the material, and I put it all together into a blender, then magical, beautiful songs are produced. Awkward Geisha is still active and I have no plans to stop working on its enlightening, world domination plans. I am very, very proud of the Geisha, and she lives in all of us. Forever.

LTW: So what lies in store for HNM and/or AG going forward? Any live plans?

HNM: Yes! I plan to tour and do some gigs next year as HNM, or maybe at the end of this year. Awkward Geisha would be a great live act. It is possible for her to play live and that has been discussed with a few members of the ensemble. Awkward Geisha’s members can vary from song to song anyway, so when she performs live it could be with musicians that are not on any of the studio recordings.

LTW: Many thanks Harsh Noise Movement!

HNM: Thank you! It has been an absolute pleasure!

Harsh Noise Movement can be found at their bandcamp and they tweet as @NoiseMuzik.

Awkward Geisha can be found at their bandcamp and they tweet as @AwkwardGeisha.