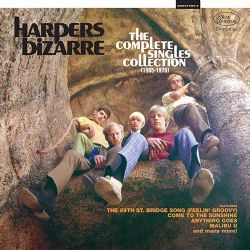 There is nothing like a good slice of sunshine-pop to make it through a soggy English winter. Louder than War’s Craig Chaligne reviews a new Harpers Bizarre comp just released by Now Sounds.

Pursuing the good work of what he had started with Rev-Ola a few years back, Steve Stanley keeps unearthing gems from this lesser known Group of the California music scene. After reissuing their first and second albums  in 2011 and 2015 Now Sounds is now offering a compilation that regroups all the singles released by Harpers Bizarre over their 5 year lifespan. The band was formed in 1967 on the ashes of The Tikis that had been releasing records since 1965.  Famous producer Lenny Waronker believed that they could achieve success with a cover of Simon and Garfunkel’s “The 59th Bridge Song (Feelin’ Groovy)” but in order to not alienate The Tikis fanbase, the record was released under “Harpers Bizarre” moniker and charted at 13 on the Billboard Hot 100, ending The Tikis career in the process. The group had future purveyor of fine eighties musical delights Ted Templeman (we owe him the discovery Van Halen….) as a leader and verged toward the more commercial side of the sunshine-pop spectrum (as opposed to band like The Millenium or Sagittarius). The compilation starts with five Tikis tracks which contrary to most their Harpers Bizarre companions are all original compositions and they are surprisingly good to boast (if a bit derivative from what was in the charts at the time). From the jangly “I’ve been Dreaming” to the early Beatles impression of “Pay Attention To Me”, the band show a band trying to create their own style. The influence of another great Californian combo The Beau Brummels can be felt on “Bye, Bye, Bye” and “Lost My Love Today”. The Tikis signing to Warner Bros and them being placed under Waronker’s supervision would led them to a radical change in sound.

Starting out with a bang the band placed its two first singles in the top 40. Their music hall cover of Simon and Garfunkel features an impressive choral break and arrangements by Leon Russell. Their second outing, a cover of Van Dyke Park’s “Come To The Sunshine” is a regular contender on Sunshine Pop compilations. Far more adventurous it features a rather complex structure and sophisticated musical backing. Its B-side “The Debutante’s Ball” written and arranged by Randy Newman is a rather sardonic take on the upper class. However the band wasn’t to replicate the success of its first two outings and the rest of the record as good as it is feels like they were trying every musical option possible to reach the higher reaches of the charts. From covers of Cole Porter (“Anything Goes”) to to easy-listening fluff such as “Chattanooga Choo Choo”, Waronker certainly must have had a hard time of convincing a bunch of rock musicians to cover such tunes. Funnily enough where the band is let loose to write their own single they come up with a pure slice of Bacharach-ian pop with “Hey, You In The Crowd”. As the sixties drew to a close their music became folkier and rootsier with originals such as “Virginia City” and “Green Apple Tree” and their cover of Joni Mitchell’s “Both Sides Now”. “I Love You, Alice B. Toklas!”, the theme song of a movie starring Peter Sellers didn’t get much airplay (maybe because of its complexity). “Poly High”, an archetypal Harry Nilsson song if ever there was one precedes the bands autobiographical “Soft Sounding Musing” featuring a young Ry Cooder on guitar.  The band finished their career (apart from a short return without Templeman in 1976) in 1969 with the cover of an old gospel song entitled “If We Never Needed The Lord Before”.

More Info on the Now Sounds catalogue can be found on their Facebook page.