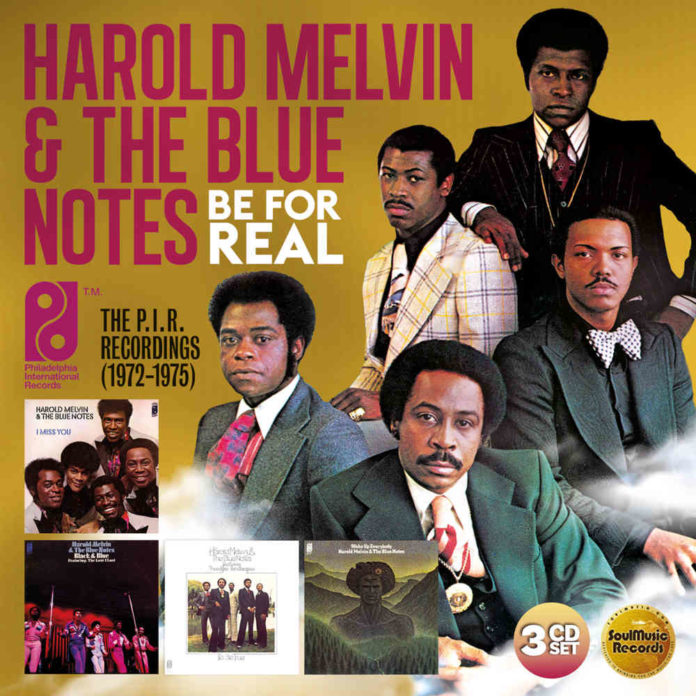 Harold Melvin & The Blue Notes – Be For Real 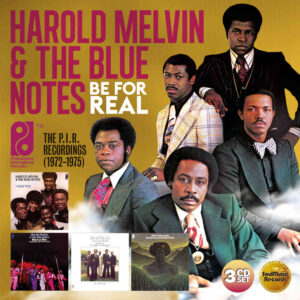 Subtitled The P.I.R Recordings (1972-1975), this new collection contains the first four albums plus associated tracks by Melvin and the Blue Notes, recorded when Teddy Pendergrass was their featured vocalist…..LTW’s Ian Canty looks back on Philly’s undisputed kings of the Soul ballad……..

It is entirely fitting that Harold Melvin, born and bred in Philly, experienced his greatest success on the Philadelphia International label, though he had to wait a long time for it. Like many of his contemporaries, Harold first got his start in music singing Doo-Wop on street corners in the city. He also developed his abilities on the piano as well to go with his budding singing skills. When he put together his first version of the Blue Notes (actually a name change from the Charlemagnes) way back in 1954, he probably didn’t think it would be another 18 years until they got to cut their debut album. The years of struggle probably made their success all the sweeter.

The band put out many singles before linking up with Philadelphia International Recordings in 1972. The Blue Notes’ membership ebbed and flowed. A turning point arrived in the form of one Teddy Pendergrass. At first he was a drummer with the vocal group’s backing band until his obvious singing talents were recognised. When these strengths became apparent he took over the lead role from Melvin himself.

At the point when they hit their stride at P.I.R., the rest of the Blue Notes consisted of Lawrence Brown, Bernard Wilson and Lloyd Parks. Signing to the Philadelphia International label gave the band access to the many assets of Gamble and Huff (not least their song-writing skills). Both were actually both long-time friends of Harold and the pair had followed his activities with interest, but held off commitment until the time was right. During the three years documented on this boxset the Blue Notes posted hit after hit on the US R&B charts, scoring 4 number one singles. They even crossed over to mainstream success with a couple of US Top 10 hits and each album was a good seller too.

The debut LP I Miss You contained the hit title track as well as their first big smash If You Don’t Know Me By Now. The latter has proved to be one of their most well-known tunes, subsequently covered by Simply Red amongst others. This album really is a masterwork of sumptuous Soul balladry from beginning to end. The sound is great, the songs sparkle and Pendergrass is clearly in his element. A full-length take of I Miss You approaches a kind of disciplined Soul-Prog meditation during the eight minutes plus running time. It works wonderfully in this elongated form.

Yesterday I Had The Blues has a barnstorming vocal from Teddy plus a delicately beautiful string arrangement and Let Me Into Your World is a dreamy dollop of Soul heaven. Let It Be You provides a lovely ending with Pendergrass providing that raw touch of Gospel in his voice. I Miss You was solid stuff which played to the band’s strengths and on the back of the singles’ success the album charted just outside of the US Top Fifty.

One thing that the first LP perhaps lacked was a bit of variety. The Blue Notes had demonstrated a real verve with ballads, but nothing had a more up-tempo pace. 1973’s Black And Blue would remedy that situation and demonstrate a more Dance-orientated side to the band. The opening track, a Jazz-flecked breeze through old showtune nugget Cabaret, is delightfully sung but a bit of a red herring in this company. From there on in this album is a quality mixture of dancefloor fillers and ultra-smooth love songs.

The Love I Lost was another big hit and showed the Blue Notes could easily cut it on the dancefloor with the best of them. Imagine how cool it would be entering a nightclub back in ’73 with this blaring out of the speakers? I know I would have been swiftly hoofed out for being scruffy by the bouncers (ouch), but anyway. This is a real early Disco classic, with the patented rich Philly formula of strings, horns etc in full effect.

Is There A Place For Me is another rump-shaker, with some stinging guitar and a truly gutsy vocal. There are still a fair few lush ballads, but the more variety makes for a better overall listening experience. I’m Coming Home provides a grandstanding climax to the LP, cool music juxtaposed with a testifying vocal. Ultimately Black And Blue was a natty upgrade on the Blue Notes’ first album, the bright dance tunes gracefully preventing things slipping towards self-parody.

This second album was a major success for the band, but the Blue Notes wouldn’t get the chance to follow it up until a few years later. To Be True, one of two albums issued by the band in 1975, was completed amidst a raft of changes. By this time Lloyd Parks had left the band, with him being replaced by Jerry Cummings. Sharon Paige now operated as an auxiliary 6th band member and took centre stage for Hope That We Can Be Together Soon, which also came out as a single.

As well as the above, Pendergrass was given separate billing on this record, cementing his status as the face of the band. This would set in place a chain of events which would lead to him (and most of the rest of the band) leaving Melvin in 1976. For the meantime, despite now being Harold Melvin & The Blue Notes Featuring Teddy Pendergrass, all was well. Paige proved an excellent addition on this and their next album Wake Up Everybody, bringing a woman’s perspective to the band that pushed them away from “Mr Loverman” territory.

Despite the behind the scenes ructions the album’s mix of slow grandeur and upbeat floor-fillers, allied to the Blue Notes proven vocal skills, made for a potent brew. Set opener Where Are All My Friends is beautifully orchestrated and has a real fire in the performance and Nobody Could Take Your Place is a textbook example of the Philly Sound – the gorgeous slow intro going into some lovely big-band Funk. Harold And The Blue Notes even reach deep into the Blues on the rueful It’s Because Of A Woman, which provides a suitably dramatic ending to the LP.

The last album presented here Wake Up Everybody was to be Pendergrass’ swansong with the Blue Notes. He even recorded the title track with producers and writers McFadden, Whitehead and Castraphen only, widening the gap between himself and the rest of the band. It was inevitable that he would leave them after this LP, but this is still a satisfying later-period Philly dance record.

Sharon Paige returns and she provides two of the highlights here. She shares centre stage on You Know How To Make Me Feel So Good, where her chemistry with Teddy is plainly evident. I’m Searching For A Love is a classy piece of resilient Soul too, offering hope and faith in the human spirit. There’s also Don’t Leave Me This Way, recorded a year prior to Thelma Houston’s hit version. Voiced by Teddy, it was issued as a single in wake of Houston’s success and was a Top 5 hit in the UK.

The final disc brings together some extended mixes and live versions, plus a percussion-heavy cover of Fred Neil’s Everybody’s Talkin’. This track was previously made available on the Let’s Clean Up The Ghetto album. A huge 11 minute version of Don’t Leave Me This Way is a highlight and three live offerings show that even away from the studio, Harold Melvin And The Blue Notes were an effortlessly smooth and sunny combination. This disc climaxes with another 11 minute plus effort, a show-stopping I Miss You.

Be For Real is a fine selection from one of Philadelphia International’s very best and brings together four consistently enjoyable albums. Although Harold Melvin recruited new Blue Notes after the split and had some further success, their most enduring work is represented here. As always the sleeve essay gives us a detailed rundown of the band’s career between the years covered and the boxset is nicely presented on the whole. The Blue Notes were at their very best from 1972 to 1975 with Teddy Pendergrass at the helm and the proof is present for all to hear. Need the sound of some easy-going good times going into the long winter nights? It’s right here.