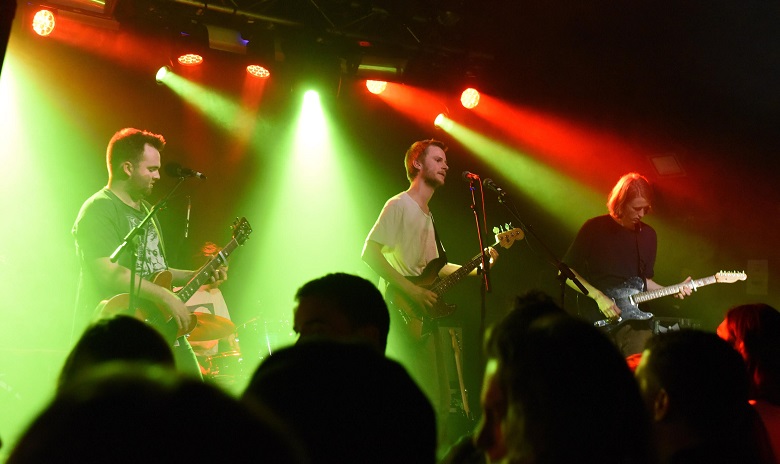 Emerging in south London at the tail end of 2013, Happyness looked like a trio of students at their band’s first rehearsal. Four years later they still do. Now two albums into their career, with a solid four years of live performance behind them including stints supporting Suede, Mac DeMarco and The Dandy Warhols, much of their appeal continues to reside in their gauche, guileless sense of detachment from anything resembling the music biz.

The ingenuous charm of their uninhibited behaviour onstage – embracing each other as they switch instruments (as they frequently do), reminding each other what great friends they are, sharing anecdotes about recent travels and the origins of songs – is all part of their charm. Those who like their front men to pose, posture and preen will find little to admire in Happyness, a group so far removed from the idea of a ‘front man’ that they switch the lead role throughout: Jonny Allen and Benji Compston taking turns at playing guitar, piano and bass and alternating lead vocals when not harmonising with each other.

You cannot get any further from the Jagger-Gallagher axis of rock stardom: you get the idea that if Jonny or Benji posed, postured or preened, they would quickly be cut down to size by a bandmate for taking themselves too seriously. As if to emphasise the point, drummer Ash Cooper took centre stage for an encore in an ill-advised venture into drag-queendom, borne aloft on fans’ hands while dressed in a retro air stewardess uniform and full make-up and singing a song by Pavement. Perhaps it was an early celebration of Hallowe’en.

Musically, Happyness alternate between primitive lo-fi rock and a woozy melodic psychedelia, pitched somewhere between Sonic Youth and The Velvet Underground; at their best Allen and Compston trade guitar lines with the sort of symbiotic synchronicity that only comes from being close friends, combined with a great deal of practice. Put simply, the secret of their success is that they clearly love each other, and what they do – and it shows.

Opener Falling Down, from second album Write In is all spiralling guitar arpeggios and blissful harmonies, driven along by a languid but restless rhythm, emphasised by the addition tonight of a new bass player to supplement singer-guitarists Allen and Compston, and to fill the gaps when they switch to keyboards, as they occasionally do. The set list delves back as far as debut single It’s On You, a song that saw them described, dubiously, as England’s own version of an American college-rock band, and more accurately defined the idiosyncratic lyrics that set them apart from their peers (opening line: “Remember when we broke into the park and you got laid and I watched and you said that was fine”).

The set tonight is divided fairly evenly between songs from the new album and its predecessor, Weird Little Birthday, and fairly evenly between trance-like jams and quirkier songs in the vein of Sparklehorse, another major influence. They conclude with Tunnel Vision On Your Part, a song that builds and builds from gentle beginnings, with a pretty piano melody underpinning interwoven guitar figures, into a beautiful cacophony of noise, and Montreal Rock Band Somewhere, a song that translates Allen’s teenage obsession with Arcade Fire into probably the most unlikely chorus you will ever hear sung by a packed auditorium: “I’m wearing Win Butler’s hair, There’s a scalpless singer of a Montreal rock band somewhere… And it’s all right.”

You can check out music by Happyness on Soundcloud

Words by Tim Cooper who is online here