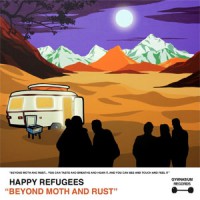 Happy Refugees – Beyond Moth and Rust

Though Happy Refugees formed in 1981, apparently established themselves as “Peel Favourites” and cut their sole (until now) LP Last Chance Saloon in 1984 I have to be honest and say that they remained an unknown entity to me until now. I was listening to the John Peel show regularly at the time, but there was so much stuff to absorb I couldn’t take it all in I suppose. But it is odd because on this showing it seems like they were right up my alley, being “independent” in the old fashioned, stroppy and uncompromising way, always remaining through those twists and turns, well damn hummable. Think more the Mekons than C86, but still a mix of the two (probably 60/40).

The current line up convened in 2011 and the fruits of this reunion have finally appeared in Beyond Moth And Rust, produced by Penetration’s Robert Blamire (HR guitarist Paul Harvey features in the current line-up of the Ferryhill flyers).  Though Tim Shutt’s vocals sound nothing like Ian Dury, I feel he lends the same type of control to the situation as was evident in Do It Yourself and the Refugees do a similar job to the Blockheads in providing an excellent musical backdrop for his flights of fancy.

This new collection drifts in out of nowhere, with What’s Your Appeal seemingly finishing one story that we will never hear to start another. It’s a looping, slow, slightly grinding track which lyrically features a rush of images midway and vocally places itself between the Nightingales and newer acts like Art Brut (but shorn of their slightly annoying repetitiveness). Indeed there is a controlled power to a lot of the material here, mid-paced but anything but middle of the road. The album takes you on a journey but has no interest in rushing you there and when it does want to pack a punch it’s all the more effective when it happens.

One of the great things about the Refugees is they’ll often hit you with a classic rock n roll guitar solo when you least would expect one, a bit like prime era Be Bop Deluxe (which isn’t a bad thing – a forgotten band but one that mixed Roxy, Bowie and Eddie and the Hot Rods style Pub Rock to great effect). It’s at once a contrast to the post punk ethos and totally fitting – after all remember the Gang Of Four’s more than a hint of Wilko Johnson in the guitar.

Overall, there’s a lightness of touch, whether they evoke a country style feel (Slaving For A Rainy Day is almost a hoe-down!) or even The Smiths meets Pulp pure pop classic Grasp The Nettle, but also it’s an intoxicating, beguiling and sometimes bemusing listen. The Happy Refugees work by their own rules, they dodge down dark allies into brilliant sunshine at the blink of an eye. The whole thing climaxes with the mighty Walking Around Parts 1,2 and 3 starting very gently, but slowly moving through the gears to an insane marching stomp that has shades of PIL about it.

It’s a fittingly strange and involving end to a fine comeback – though all you need to really know about Happy Refugees is that they are vital in 2015 so the history, nice as it maybe, doesn’t actually matter that much.

For more info or to get the CD or download visit happyrefugees.com or the regular outlets.