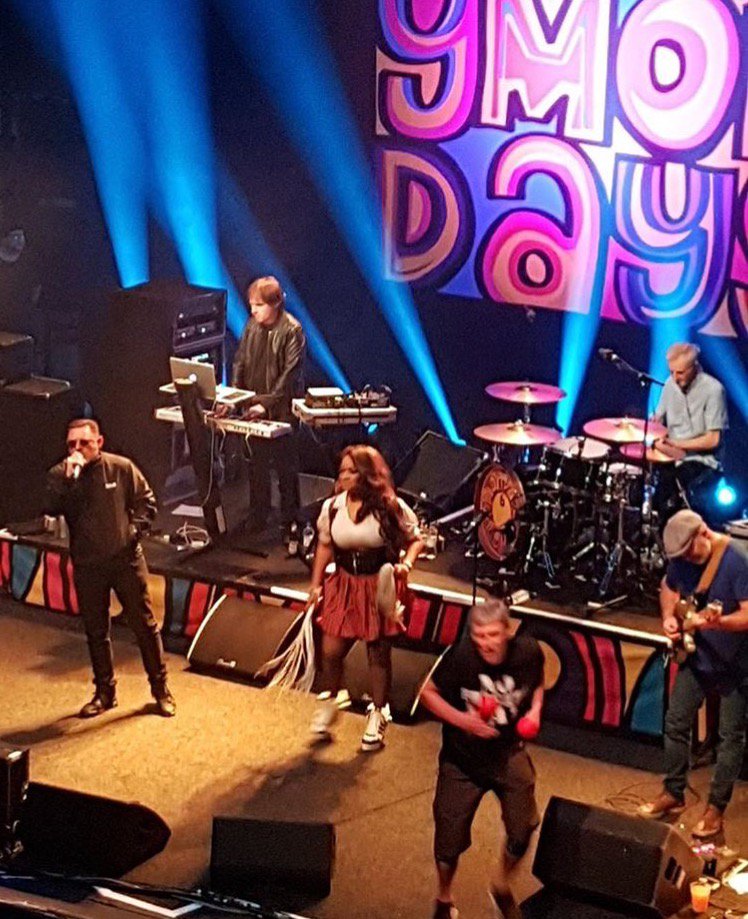 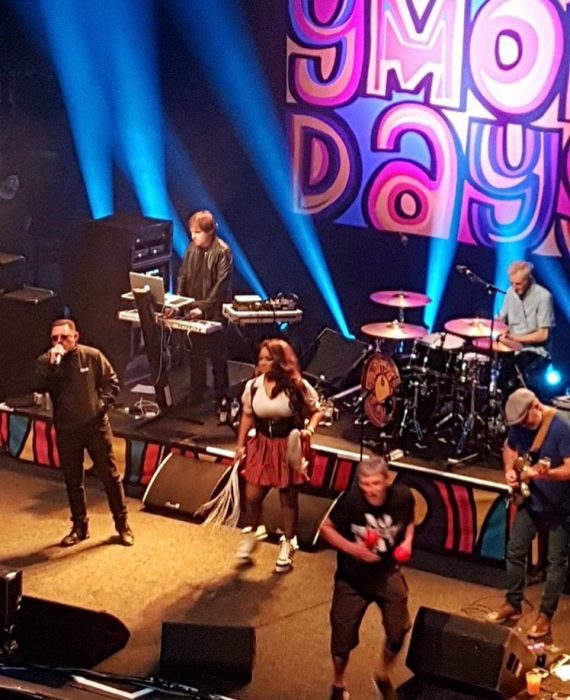 The Mondays get madferrit in a Festive Season Glaswegian style.

This was the final date in the Happy Mondays 30th anniversary tour and while I hadn’t planned on going along, a series of happy accidents saw the missus and myself in the venue just minutes before they arrived onstage.

The Academy, formerly a typically derelict cinema-then bingo hall, has been a venue since around 2002. It’s one of the better placed venues in Glasgow, being walking distance from the city centre and with great sight-lines throughout its main area and balcony. Unfortunately, the sound has never been short of dreadful any time I’ve been in it and I actually make a point of avoiding it due to this. With a huge mixing desk strategically placed, one would think it would be a fairly easy job to get a decent sound. It seems not; every gig I’ve ever seen in the old place has been far too quiet (to the extent that you can converse over the acts) and the sound has been weak and all in the mid-range with the vocals and bass lost in the massive void above the front of stage. To be fair, the crowd tonight didn’t seem to care a jot. Listening to people around me chatting in the queue for the bar, it seems that The Mondays are regarded as long-lost friends to some and casual acquaintances to others. One guys story about “that c**t Shaun” who’d apparently “spent a night in ma hoose hoovering all ma lines” and then promptly forgot about the bloke (said gentleman met Shaun Ryder outside the venue but hadn’t any recollection of him, unsurprisingly) had me grinning broadly. That’s the thing about the Mondays, Madchester and all of that; it is/was a party scene and most of the people here tonight are loathe to leave it behind which is no bad thing.

Let’s be honest, The Mondays are a huge draw (pun intended) for their eighties and nineties output and no matter how good the “Uncle Dysfunctional”  material was, people want to hear the famous songs. Nothing wrong with that and I’d also add that the Black Grape album from earlier this year was one of my records of 2017, a huge return to form.

The lights drop, that famous logo is illuminated and the musicians hit the first few notes as the crowd go suitably nuts. “Loose Fit” is the opener and whilst not sounding as deranged as they did back then, the groove is immediately hit and then some. Rocketing straight into “Kinky Afro” with a tartan-clad Rowetta swinging her whips as well as her hips sees the temperature rise exponentially. Bez is being Bez and while nowhere as animated as he was back in the day, he’s still cheer-leading the crowd down front and being the focal point given Ryder’s static stance.  That famous  “Son, I’m thirty, only went with yer mother cos she’s dirty” lyric is gleefully sang back at Ryder by the hordes of revelers as the band grin happily.

The tempo drops a little with “Dennis and Lois” and “Donovan” until a sample-heavy “Hallelujah” which Ryder introduces as “the remix version” takes the mercury back up a few notches. Bez and Rowetta are taking turns at having a breather (and a costume change for the latter) but Ryder and the band have no issues with keeping the audience engaged. “24 Hour Party People” seems to be the anthem for most of those present tonight and sees a rush of folk from the top bar streaming down to the area stage front. It’s energetic, it’s witty and it’s all good fun. The Mondays may have been a cultural phenomena back in the early nineties and I guess this is all a bit nostalgia packaged, but hell, it’s a great way to spend a Saturday night before Xmas and who would deny these guys their financial day in the sun, really?

Long may they Rave On.