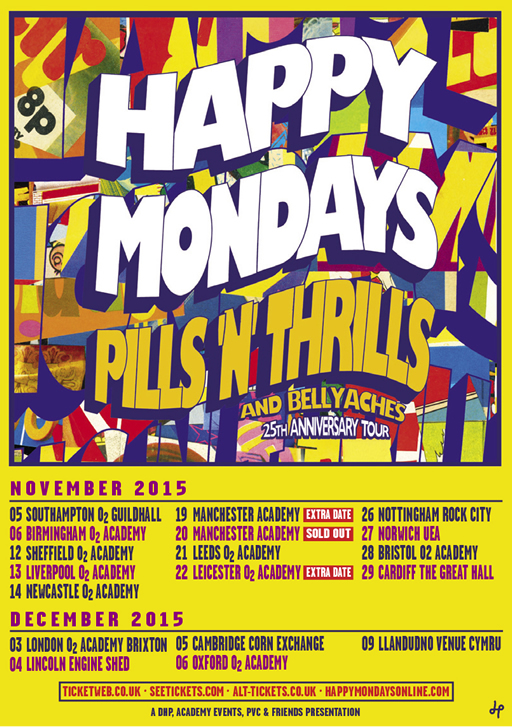 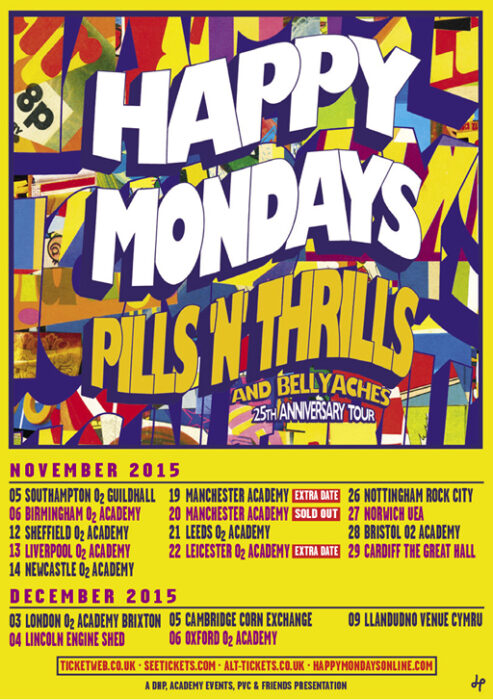 So it’s been twenty five years since those Manchester purveyors of alt-punk funk combined forces with House music DJ Paul Oakenfold to release an album that so perfectly and succinctly encapsulated the rush and twists of E culture. In a time where the boundaries blurred and everything was up for grabs, the Mondays threw everything into the mixing pot, rolled it up and puffed it out in a plume of technicolor. Shining brightly but with an innate sense of darkness and filled with street slang, Pills ‘N’ Thrills was a clarion call for many.

Twenty five years later the album still sounds fresh and full of vibrancy so as the crowds gather to hear it played live by the original line up (minus Paul Davis) there is a palpable sense of excitement flowing through the venue. Many different ages are represented with those who were “there” all geared up, ready to let their limbs fly loose, and those who were too young to see the band in their original incarnation (many not even born when the album was originally released) doing the same. The drinks are flowing, the good vibes trickling through and when the stage lights alter and the heavenly presence of Rowetta takes to the stage, a surge to the front occurs as we are sent spiralling into the opening track Kinky Afro. A modern classic, Kinky Afro is as good as an opening song you will find on any album and as soon as the band launch into it, they get immediately drowned out by the crowd singing that (in)famous opening line..”Son I’m thirty, I only went with your mother ‘cos she’s dirty”. The singalong continues for the whole song as many dive back into memory, feeling that chemical rush. Shaun Ryder is looking trim and fighting fit and whilst he mostly stands still his presence is electric as he speak/sings. The aforementioned Rowetta’s vocals are powerful and are even more striking than on the original album full of soul and impact. Bez is here to and he instantly gets people imitating his famous moves (one person commented that the box for confiscated items by the entrance was full of maracas. An instant sign of how important his presence was and is to the band). The rhythm section of Paul Ryder and Gaz Whelan locked into each others groove adding the liquid whilst Mark Day sprayed colour with his guitar.

God’s Cop followed and it became instantly apparent that we were going to get the album played in its original running order and whilst this can take away some anticipation from the crowd (you know exactly what’s coming next etc) tonight this was not the case as the Mondays transformed it into a work of commercial avant-garde. Loose Fit was a revelation, turning the original louche funk into a deep work of Can-like electronica. A clarion call to arms, Loose Fit is pure attitude and tonight it was delivered with panache and the right amount of sleaze. Sounds good to me…

The next highlight was the one-two smash of Bob’s Yer Uncle (the sexiest song ever written by the way) and the classic Step On. Step On was the moment the night went from great gig to stratospheric with not a single head in the crowd staying still. The bob was on and it was joyous. Holiday and Harmony then closed the show and, again, these two tracks were transformed into living, breathing and modern works. Never once sounding dated or museum pieces, music as powerful and current as anything out there that’s clogging up the airwaves. Mark Day rode us out on a sea of psychedelics as Bez gave us his best Welsh before leaving the stage.

After a brief break the band returned and what followed was a moment of pure alchemy as we are given the delicious treats of Hallelujah (club mix) and Wrote For Luck (Think About The Future Mix). These two songs are the finest to have come out of that era and no arguing. They were the TRUE blend of guitar band and acid house and tonight they packed a punch. Sweat flew everywhere as the crowd got the closest they will ever get to have being in the Hacienda in its prime and smiles were plastered across the audience. A communal feeling was shining down and the dark, wet weather outside was banished as we rode the trip. Thrilling.

Seeing the Mondays now is a thing of beauty. They may have shaken off much of the madness that they were notorious for but they have lost none of the ramshackle beauty that made them into the stars they so rightly became. There is a tangible chemistry that flows through the band (the moments where Rowetta and Shaun sing facing each other really hit this home) and whilst those heady days are far behind none of the magic has and that is down to one thing. The thing that millions of pounds/dollars etc are spent looking for, and that thing is the “X factor”. This band have it spades. They have “it” and a fine example of what can be achieved if you give young people a chance to express themselves (RIP Tony Wilson). Those young people you frown upon could be full of intelligence and drive and could be soon writing the soundtrack for a generation.

Happy Mondays are on exquisite form and if you think they’re going to be good beforehand then you’ll be wrong…they’re even better!