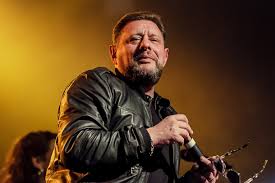 There are too many people who denounce The Happy Mondays as a comedy act. Fronted by a man who’s taken more drugs than the Madchester scene combined and followed around by the bug-eyed court jester that is Bez, outsiders assume that the Mondays are just Northern monkeys who happened to be in the right place at the right time. No one talks about the sheer originality of the group or how the band share a range of obtuse influences, from Sly and the Family Stone indebted funk to jarred Captain Beefheart style riffs and the undisciplined vocals of Tago-Mago era Can.

Now for its 25th anniversary, the band play Pills, Thrills and Bellyaches in full, an album nothing short of a masterpiece. Shaun Ryder’s ear for social commentary and a loping groove has always served the band well even though he looks a little out of place these days. He’s practically PG certificate now; noticeably trimmer with a new set of dazzling teeth, he appears slightly wooden at times but the quick wit and good-naturedness never slips. Every single track off the album is worthy of appraisal, drenched in sleazy humour and genius guitar playing from the under-rated Mark Day, you can imagine how exciting it was back in 1990 because it’s still exciting now.

As they open with the hilariously filthy Kinky Afro, it’s hard to believe that the track is a quarter of a century old. Lyrically and musically, the Mondays music spoke of a time, place and philosophy that’s hard to place these days. The louche, working class phrasing that litters their back catalogue only adds to their volatile facade. Their set may be built on nostalgic foundations but it’s hard to condemn The Happy Mondays as “past it”, especially as it’s nothing short of a miracle that they’re all still alive and going at it. Rowetta looks as youthful as ever, hollering through Loose Fit with gusto whilst Bez keeps the energy going, looking like John Bishop out on the piss.

Their formula is still completely unique; laddish charm blended with groove and soul, the Mondays emulated the loutish vigour of Madchester but weren’t afraid to take the mick out of themselves. The most endearing aspect about them is their sense of humour; their willingness to have a dancing mascot as their focal point alongside sharing the stage with a powerhouse diva is borderline genius. There’s massive love for the band from all angles and not just because of the music; the Mondays have charm and personality which is seldom seen in a lot of indie bands, both past and present.

Step On is the ultimate hedonist’s clarion call so naturally it receives a huge reception but the party never ceases, from Dennis and Lois right down to the encore of Wrote For Luck and Hallelujah. If past Happy Mondays sets fell short of expectations, tonight’s exceeded them. Energetic and enigmatic, the Mondays prove that when in doubt, you should just have fun.