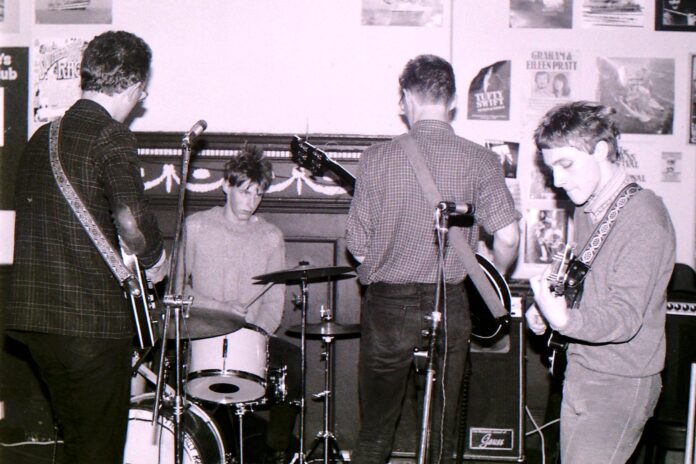 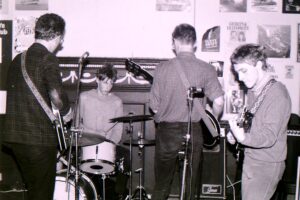 Happening Right Then!: The Photographs of Paul Groovie

“Happening Right Then!” is a 150+ page hardback book featuring over 200 colour and black & white photographs taken at  iconic venues such as The Living Room, Room At The Top and The Big Twang between 1983-1985.

In addition ,the photos will be accompanied by comments and recollections from many of the bands and people featured, some revisiting this period in print for the very first time.

A collection of key and classic photos of the 1983 indie underground scene with many key faces all photographed by Paul Groovie- pledge now at the link below and get this book released!

In the gloriously hot summer of 1983 a bunch of misfits started going to a tiny club being held in the upstairs room of a pub in London’s Conway Street.  For the princely sum of £2 entry they were treated to a night of entertainment that usually involved four relatively unknown bands.   For a sort of dry-run for the club in June, The Television Personalities had played, and on the official opening night on 6 August, The Nightingales were the headlining act.   With its red carpet and flocked wallpaper, the room had something of a homely feel about it which is why it was christened The Living Room by the club’s promoter Alan McGee.

It is hard now to explain just how dire the mainstream music scene was back in 1983, when synth-pop drivel flooded the charts.  The biggest-selling acts of the year included Kajagoogoo, The Flying Pickets and Phil Collins. Things weren’t any more comforting in the real world where Magaret Thatcher had just been re-elected to power for a second term.  The Living Room was a bolthole, an escape from much of this, and one misfit who went there regularly was Paul Groovie.  But unlike the other misfits, every time Paul Groovie went there he went armed with a Practica 35 camera and took photographs of what was happening all around him.

Taken as a whole, the photographs are a shocking reminder that the past really is a different country.  There are fantastically authentic, capturing moments that are instantly recognisable but now hopelessly unreachable.  They evoke the atmosphere of The Living Room in such clarity that you can almost hear the music being played there.   Like some of the fanzines of the period such as The Legend!, Slow Dazzle and Rox, there is no attempt to critique, just a joyous desire to capture what is happening right then.

“I ran a fanzine called Groovy Black Shades and I needed photographs to accompany the articles and interviews in it.  The tradition fanzine solution would have been to rip off photos from the mainstream music press, but the music press wasn’t writing about the kind of bands I liked and was interested in.  So, initially, I started taking photographs with a view to using them in the fanzine.  Then pretty quickly the bands started asking me if I would take photographs of them for their own purposes – sometimes to use on record covers.”

Luckily for posterity, Paul Groovie photographed whatever caught his eye, and so along with the photographs of bands like The Television Personalities, Primal Scream, The Pastels, The Loft, The Shop Assistants, and The Jasmine Minks are those of the people running the club, such as Alan McGee, Joe Foster, The Legend and Dick Green, and also of people who came to the club, such as Simon Down, who set up The Pink Label, or Leigh Goorney who put on 53 gigs in the Cellar Bar at Thames Polytechnic during his tenure there as ENTs Secretary.   The same magpie approach is true of the photographs he took of other clubs and venues, as well, such as Dan Treacy’s Room At The Top club in north London.

In the age of Facebook, Instagram, high quality mobile phone cameras and the Selfie, it’s hard to appreciate just how unusual all of this was.  People didn’t generally take cameras to gigs, unless they were professional photographers working for one of the major music weeklies.   And if that was the case, the photographs they were expected to produce needed to be artful, stylised, often clever but as a consequence, often sterile and boring and with none of the genuineness and warmth of Paul Groovie’s work.  So often what makes the Paul Groovie’s photographs so good is that they capture the unguarded moment.  They are well-taken photographs full of joy and fun – seriously unserious.

The whole archive adds up to more than 150 photographs and it is very hard to pick out favourites because every picture really does tell a story and collectively they tell one hell of a story.   But amongst my favourites are the photographs of Dan Treacy, usually dressed in sartorial finery that faintly echoes the neo-psychedelic scene of a few years earlier, which seem to perfectly contain the essence of The Television Personalities.   Bold, confident, with just a touch whimsy. There’s also a great one of The Pastels performing with David Keegan from The Shop Assistants guesting on drums. There’s a photograph taken at The Living Room (first night?) with Rob Lloyd of The Nightingales in full flow as a young Pete Astor of The Loft watches on from the crowd.  There’s a wonderful shot of Adam Sanderson and Jim Shepherd from The Jasmine Minks eyes down focused on the guitar parts they were still learning to fully master.  There’s a lovely image of the crowd coming up the stairs to an obviously packed show show at the Room At The Top.  And there’s a photograph of Alan McGee, guitar in hand, dressed in denim jacket and fisherman’s cap (remember those?).

With the Indiegogo campaign in full swing to raise funds to publish a book of the photographs hopefully at long last there will be a permanent accessible record of the work open to all.  Seeing the photographs for the first time I found quite startling.  Memory shifts and alters things in a way that is ultimately untruthful, but Paul Groovie’s photographs show it exactly as it was.