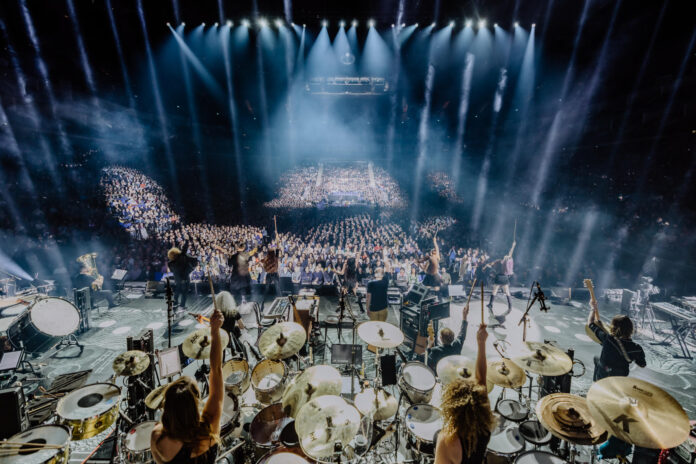 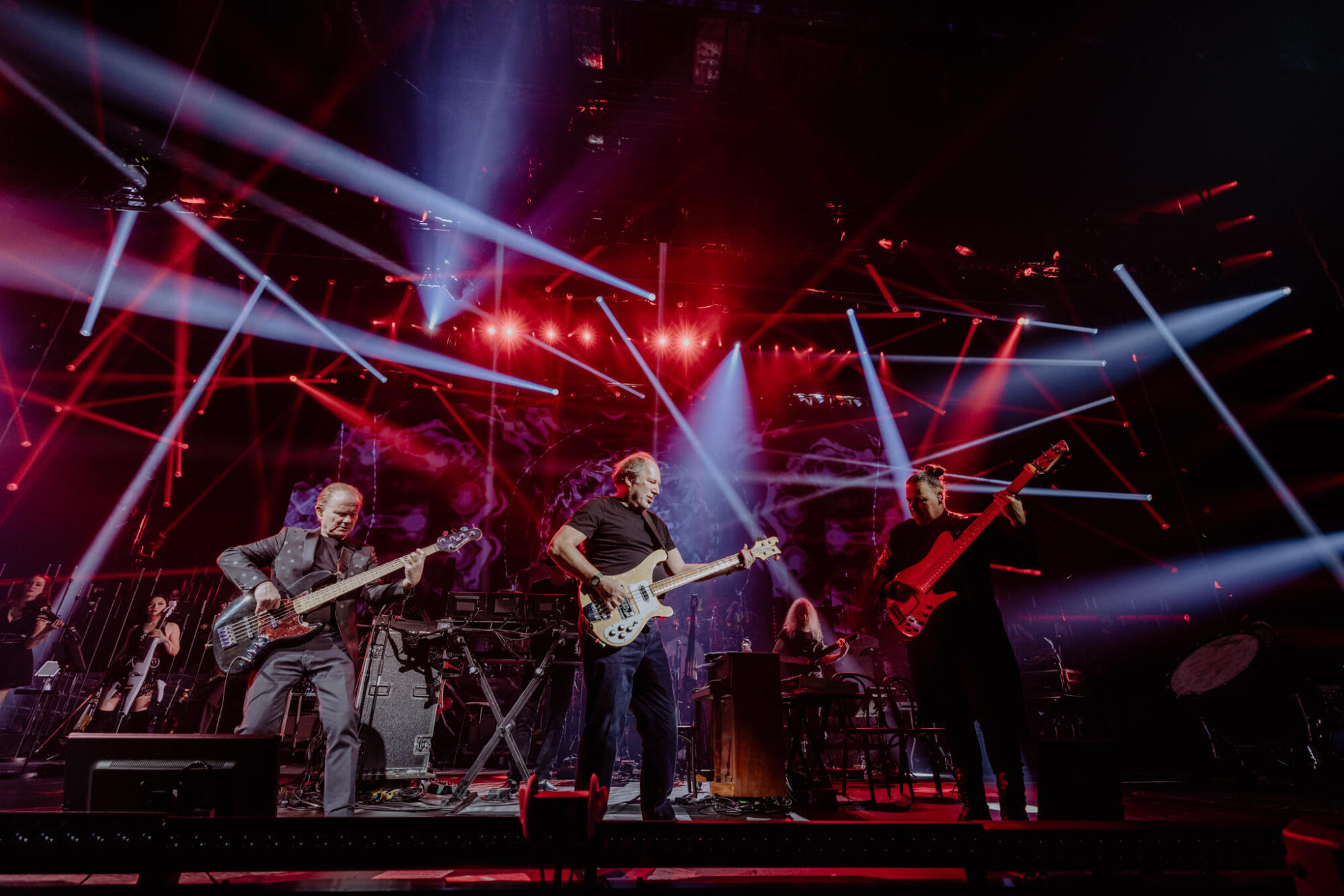 Multi Award-winning composer Hans Zimmer and his orchestra played a sold-out show in Manchester’s AO Arena as part of his rescheduled world tour. Daniel Tsourekas visited the show before they leave for Europe and reports back.

There’s a sense of importance in the air in AO Arena as it slowly fills up for one of the most important concerts of the year. Hans Zimmer is a remarkably familiar face to every cinephile and music lover, as his compositions and soundtracks have been a part of multiple generations of childhood. In front of the first rows, a massive screen portraying the blue and yellow colours is present, in solidarity with Ukraine. As the last seats become occupied, the lights go down, and the crowd cheers for the woman on the edge of the stage, in a dress fitting for an alien desert.

House Atreides from the box office hit Dune is a very remarkable song. Loire Cotler’s voice gives it the character and tone that makes the song what it is, so it isn’t surprising that she’s standing on the edge of the stage, harmonizing, and singing in perfect tone walking towards the other side, where a large drum is located. The special effect on the screen behind her perfectly follows the vocalists’ movements, it is a majestic set piece. As she reaches the drum with one of the drummers, the screen slowly lifts to reveal the orchestra behind, the special guest of the show, guitarist Nile Marr, and their lead, Hans Zimmer himself. Leading into Mombasa (from the film Inception) – the opening songs are met with cheers and applause, as Hans declares Manchester the best city to play in, and says how much he has missed the city. 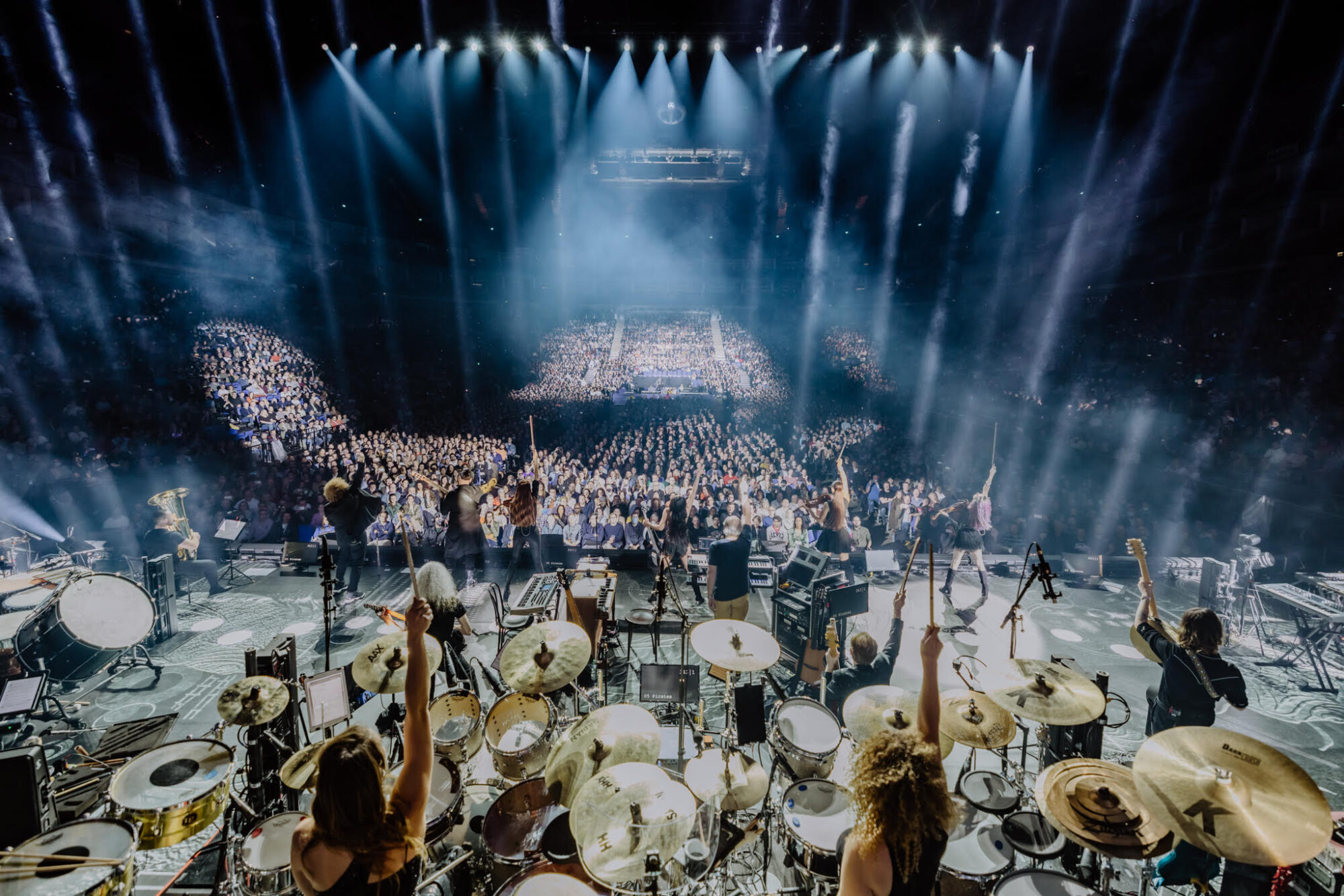 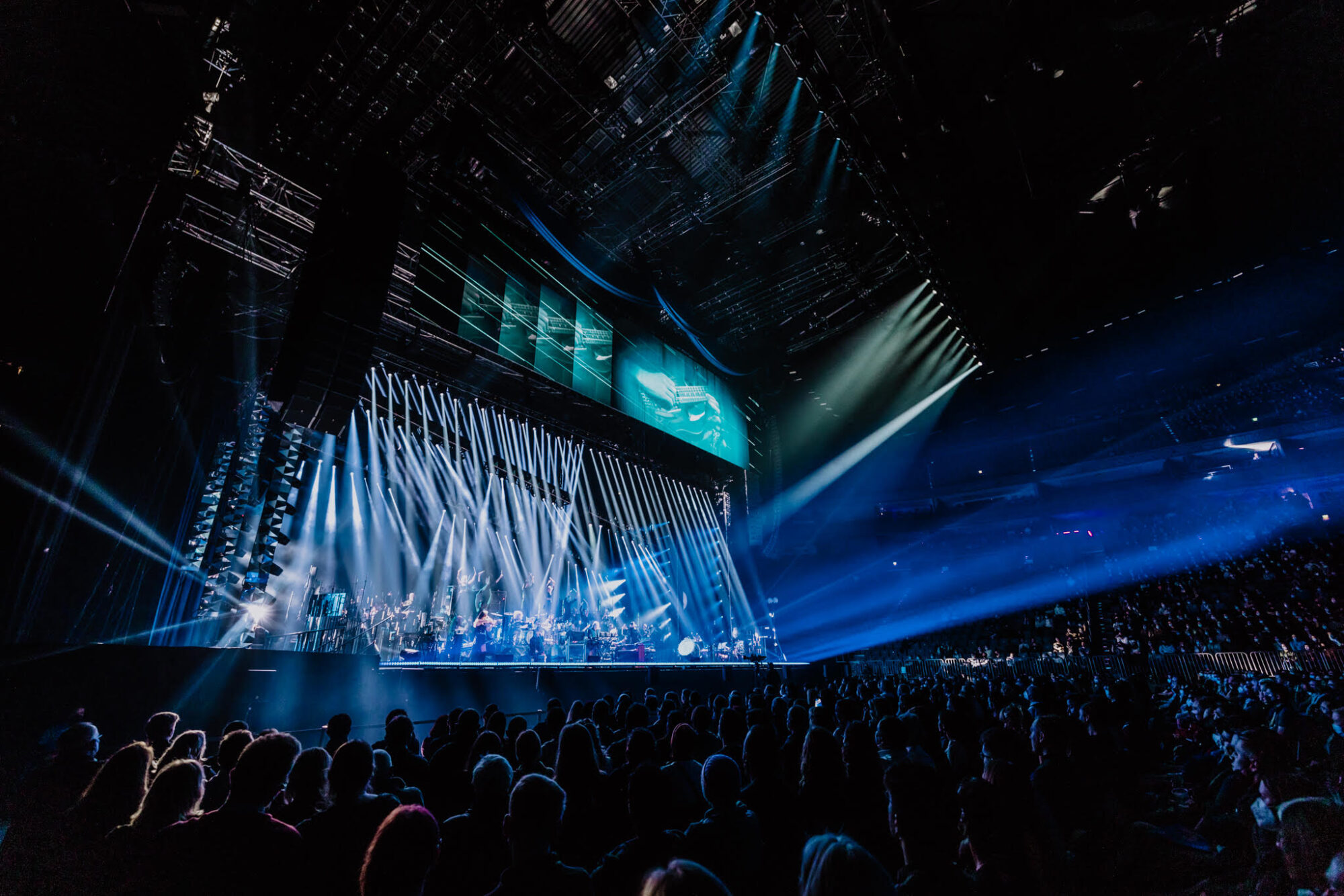 Following a very sentimental and emotional moment acknowledging the Ukrainian members of the orchestra, and the importance of women in humanity, Themyscira and Open Road, from Wonder Woman 1984 are perfectly lined up with the theme of Hans’ speech, highlighting the female musicians apparent, most notably violinist Tina Guo, who takes the stage by storm with her presence, technicality, and talent. Followed by songs apparent in the Man of Steel soundtrack, its apparent that the intensity and complexity of the concert aren’t stopping any time soon.

By the time Gladiator comes around, the audience is notified that vocalist Lisa Gerrard, unfortunately, is absent due to Covid and that for the past two days, Loire Cotler has performed the vocals for the legendary soundtrack with minimum practice. It is impressive to say the least, as the Gladiator songs, including Duduk of the North, excellently performed by flautist Pedro Eustache, captivate the audience. Just before the first intermission, act I ends on a fun note, as Jack Sparrow, At Wit’s End and He’s a Pirate from the Pirates of the Caribbean trilogy, lifting the spirits.

Twenty minutes later, the members re-entered the stage, performing a series of so-called Obscurities, including themes from Rango, Sherlock Holmes, and the Lone Ranger. The stage gets set up with a gong, leading to the exquisite A Way of Life from The Last Samurai. Following a series of purposeful glitches on the screens, the next couple of sequences are aimed at comic book enthusiasts, and after a quote from Nolan’s Dark Knight trilogy, the mood is set. Tracks I’m not a hero, Like A Dog, Chasing Cars, and Why So Serious, is a spectacle of fascinating lighting, dark themes, and brilliant instrumentation. Contrasting DC, the setlist follows with Marvel film X-Men Dark Phoenix, and the song X-MDP, which soon leads into Dunkirk’s Supermarine, all while the female vocalists steal the show during these performances. 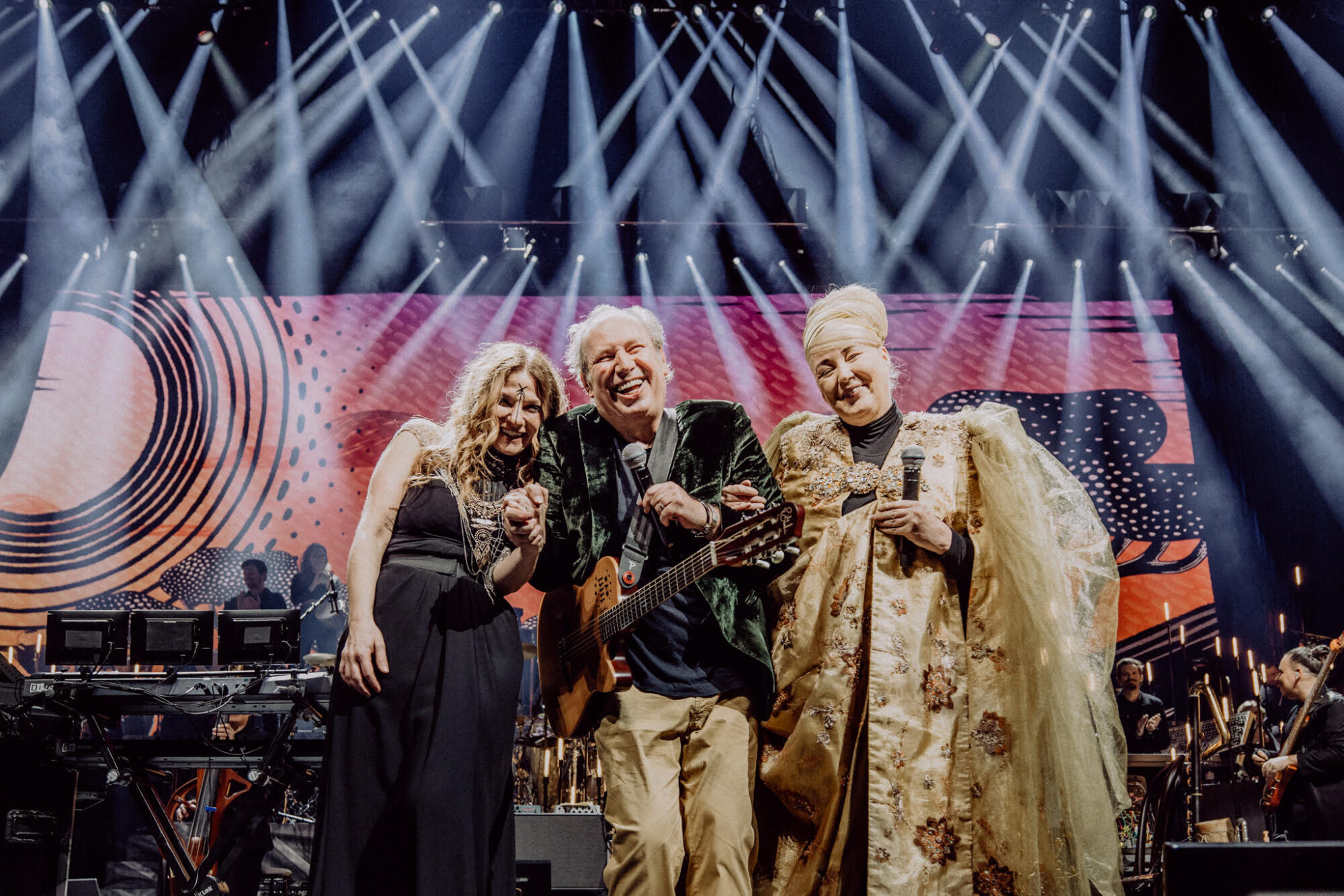 The stage swiftly transforms into an audio-visual nightmare, with distorted sounds coming from the microphones, dark glitches occupying the screens, and haunting instrumentals, as Paul’s Dream from Dune took over the arena. What the crowd does not expect though, is the highlight of the concert that will follow. Interstellar is a film that has been widely credited by fans and critics alike. The soundtrack for this film transforms it into the masterpiece it is, so it comes to no surprise that the performance of songs Dust, Coward, Stay and Detach are not only the highlight of the concert but quite possibly a contender for performance of the year, as vocalist Leah Zeger gives an amazing vocal lesson to 22,000 people following the abstract difficult violin notes.

The last tracks come in the form of Circle of Life, He Lives in You, This Land, and King of Pride Rock from the fan favourite and classic, The Lion King. With the band, original singer Lebo Morake, closing an otherwise perfect concert, or so the audience thinks. After a 2-minute interval, Hans and the band come back on stage for the encore, which consists of the Bond theme and last but not least, the memorable Time from Inception, which is what can be considered a perfect closer to a phenomenal night, and quite possibly one of the most important concerts of the year.

Words by Daniel Tsourekas you can keep up to date with his future posts at his authors’ profile.