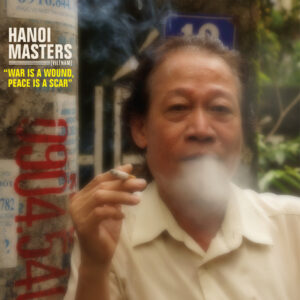 Hanoi Masters (Vietnam) – War Is A Wound, Peace Is A Scar – (Glitterbeat)

This is the sort of album that we should all be educated to listen to. Eleven tracks that were recorded last year by Grammy award winning producer Ian Brennan as part of an audio document. Labelled as being ‘ recordings of lesser-known global music traditions’ the album highlights traditional songs together with tunes that were sung to the troops of the Vietnam War to boost morale.

Still known as the ‘American War’ by the musicians, the hurt and pain of the forty year old memories are still present as we are taken on a trip through hope, love, death and loss with voices that are as endemic to Hanoi as are the instruments that are used.

One particular ‘find’ was the K’ni, a plucked instrument made up of a single string that is held between the teeth creating an almost vocoder or Theremin effect. The Wind Blows It Away by Quoc Hung whilst only one minute long is a fascinating piece of music and not to be missed.

To the outsider, there is a feeling of sadness and regret in the tracks featured here. Whether it be a lack of literal understanding or whether it be the tone of the passages is hard to determine, but what is clear is that everything is sung with emotion and passion.

Heroine Song contains both male (Xuan Hoach) and female (Vo Van-Anh) vocals, and the interplay and connection between the two is quite startling. Similarly, Doomed Love tells of a woman’s youth slowly slipping away with a backing of simple percussion and a mono-chord instrument called a Dan Bau.

It’s fair to say that War Is A Wound, Peace Is A Scar maybe isn’t immediately easy listening for the Western World, but given time and patience it is easy to see its appeal. Gratitude is performed in the style of blind artists who used to flit from town to town performing in a way similar to modern day busking.

At little under thirty-five minutes, it’s a short album but one that is packed to the rafters with enough diversity to entertain even the harshest music critic, and closing with the eight minute Taking Your Spirit To The Next World both percussion and voice are provided by Pham Mong Hai in a lament said to honour the death spirit.