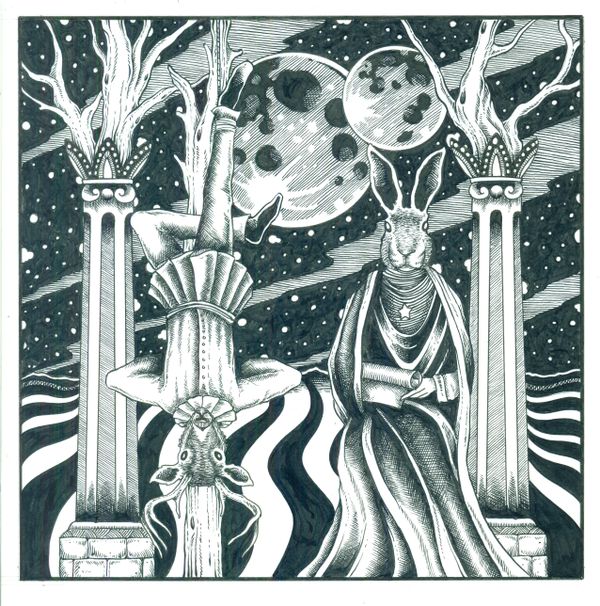 Anyone who’s seen the duo play live or even had the pleasure of their debut album, Before The Sun, will know the sort of chemistry that exists between Hannah Sanders and Ben Savage. More often than not nestled closely round a single microphone, their striking intimacy and poise that’s now part and parcel, their USP, is quite something to behold.

Don’t be fooled by the curious yet bold cover art that uses the tarot references of the hanged man and the high priestess that might be more akin to hosting death or black metal contents. Does it indicate an autobiographical nature? You ‘ll have to ask, although their belief that the tarot provided a significant guide during the recording perhaps indicates that there are unseen forces at work here.

Listening to Awake is within the realms of indulging in a rare delicacy as the duo present their calling card that crosses the boundaries of English and American traditions. What raises the bar on Awake though is the strength of their own compositions; hinted at and playing a minor role on Behind The Sun, the original songs now take on a more significant role – six of eleven tracks from their collective efforts – and all the better for it.

Without wanting to be picky, rising to the top are a track which has acted as an irresistible taster for the album, A Thousand New Moons

Then there’s Awake – the title track – languid electric guitar in a country style pace and having listened to the song repeatedly, whatever the subject matter is, whatever the instruments are being played, it’s simply a beautifully realised song. It’s easy to pick out the startling quality of Hannah’s crystal clear vocals or the way in which Ben Savage switches between caressing the guitar or dobro, but it’s their indescribable combination that lifts the duo format into the upper stratosphere.

Guest musicians play a role – the soft horn, almost unnoticeable on first hearing – on the banjo led opener Selkie Song, adding a warmth and uncharacteristic weight and the quality of Evan Carson’s subtle percussion never overbearing but tickling and bubbling away just below the surface.

From the traditional interpretations come the well worked Reynardine which they deliver with brisk aplomb and tumbling guitar notes while Santa Fe Trail is one that may be familiar to last Summer’s festival goers, the distinctive chorus of the railroad song a classic communal moment led by Ben’s easy delivery. The Sanders/Savage combo take and make the Guthrie/Bragg Way Over Yonder In The Minor Key their own. The line “Ain’t nobody who can sing like me” not blowing their own trumpet yet totally appropriate.

Me, I’ve been lucky to grab a pre-release copy of Awake and have been guilty of playing the album to death. Not only that, I’m even planning a trip to Todmorden to the little folk festival there across the weekend of 5/6 May to catch these two play at the start of the album release tour. I might even be putting my money where my mouth is by anticipating that come this time in 2019, Awake, Saunders & Savage or one (or two) of their songs may be being heralded as Folk Award nominees/winners. Watch this space for an “I told you so” if they do. In the meantime, just wallow in the simple pleasure of listening to two musicians in harmonic empathy.

Here’s Way Over Yonder In The Minor Key from the album: