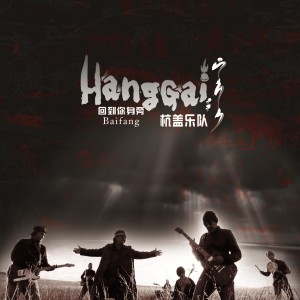 There’s something very special about his album. Buy it and see. See how heavy it feels. Maybe it’s the mammoth thirty two page lyrics book that comes with it? Maybe it’s just because it’s jam packed with eighteen magical tracks?

Originally from Beijing, Hanggai have their roots in traditional Mongolian folk music, but have along the way blended that with a more modern rock sound and pop influences. The resulting album, Baifang is an exciting breath of fresh air. There’s a real aggressive enthusiasm to the majority of the tracks, enormous power in both instruments and voices, and a unique “throat singing style” features several times.

Traditional instruments such as tobshuur (two-stringed lute) and morin khuur (horse hair fiddle) combine with conventional electric guitars and drums to create a hugely powerful sound of rock and pop.

Vocalist Ilchi and Yilalata have deep brawling tones which complement the band superbly, none more so on Hong Galou which has as catchy a melody as anything that you hear on the airwaves as guitars sweep and swirl around a gargantuan riff, and vocals roar and ascend into the cloudy Mongolian skies.

Title track, Baifang (Back To You) is anthemic and regimental with incredible vocals – that span the whole eighteen tracks which include three mantras placed at the beginning, end and midway through. The mix of instruments is fascinating and creates a sound that Hanggai can confidently call their own as a gushing harp-like instrument closes the track.

It’s not all loud rock either as Miss Daughter and Qinhal Lullaby display, in fact Gold Buttons ventures into Country and Bluegrass territory. Hanggai are superb musicians. Reggae and a little dub even features on My Mother.

When you think nothing new can come along, gorgeous female vocals guest on Miss Daughter and High Trees. Baifang has a bit of everything on a quite brilliant album of diversity and richness. Hanggai, your new favourite Mongolian folk-rock band.