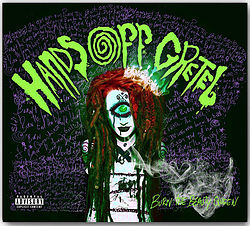 “I AM THE QUEEN OF THE UNIVERSE!”

This was a dream I had…

It’s 2026.  I am interviewing Lauren Tate from Hands Off Gretel, the worlds richest rock-star, in her palatial home.  Her Medusa dreadlocks which be-drape her shoulders are blood-red , so are her lips. We’re talking about her sexual preferences. She purrs…

“I like boys… girls, … she-males… animals,vegetables, the living and the dead, aliens, humans, robots ….I’ve not got a sexual preference really.”

The rest of the band are strapped to hoverchairs with Virtual  Reality visors on, roadtesting the new Hands Off Gretel game which simulates drug-induced-hallucinations and orgasms whilst you are immersed in Virtual Reality versions of their song videos.  I ask Lauren about her songs.

“They are my children. Mutant Superhero, Supervillain offspring…. They are Fantastic Tales born out of my fevered imagination fed by my ego, my libido, self-doubt, self abuse and the everyday horrors of existence, baby.  They are my Prayers, my Dreams and my Exorcism…”

Eunuchs are fanning her with giant ostrich feathers and dropping peeled grapes into her mouth in the opulent surroundings of her Cleopatran boudoir. Her surgically enhanced breasts, all three of them, rise and fall as she speaks…

“Of course,  the beginning of my success was when you reviewed my first album on Louder Than Whatwasit? I remember it started with the words…. I AM THE QUEEN OF THE UNIVERSE!”

I go to take her hand, to kiss it subserviently and she shrieks.

I wake up.  Back in 2016 and I’ve still got to finish my review of Burn the Beauty Queen, the debut album by Hands Off Gretel.

If I was 15 or even 25 instead of 52, then this would without a ghost of a shadow of a doubt, be my ‘album of the year’. It’s so full of sex, death, cartoon catharsis, lysergic psychodrama,  great stinging guitar and a drawling, roaring she-devil of a singer.

For a pledge-funded, D-I-Y release by a South Yorkshire ‘grunge’ band it is a massive achievement and over-ambitious album which marks the start of a career that could well see them becoming as big as Nirvana, Marilyn Manson or Miley Cyrus over time….. given the breaks, and skillful management.  Obviously they should do it on talent alone -but this is 2016.

If we are completely honest here, Hands Off Gretel are built around teenager-dreamer the kick-ass Lauren Tate and her look and vision for the band ( she does the artwork, videos,…).  She is stunning. A mass of eyeliner and hair-dye, but a big-eyed, wide-smiling screamager who has the world as her veritable oyster . She has a great voice, really strong and versatile and huge charisma. A disarming mix of confidence and shyness.  She is a star who uses her femininity and sex appeal knowingly to entrance and bewitch both boys and girls but  at the same time an empowering female role model who through her songs rails against everyday abuses. Feminism, Fetishism and Rock’n’Roll.

Then there is the suspicion of ‘inauthenticity’ about Hands Off Gretel….  Lauren doesn’t hide the fact she has been a “You-Tube sensation” since she was 13 singing cover versions of everyone from Led Zep to Pink and Hole. She could have chosen the X-Factor route perhaps but got into grunge and messy self-expression.

This is no different to the Sex Pistols being a ‘manufactured’ band or Joe Strummer being the son of a diplomat of course. Hands Off Gretel are not a self-limiting ‘punk band’.

The most common dismissive comment about Hands Off Gretel is “they just rip off Hole and the Distillers”. But hey;

Neither band exist any more nor are they likely to reform.  Both were magnificent bands and ripe for re-assessing and re-use of their tropes. Anyway, Lauren is far better a singer than Brody, technically.  Their influences (seem to) extend further to Babes in Toyland, Solar Race, probably even Dickless.  Their infatuation will Hole will lessen with time as they develop. They fully acknowledge their influences, and originality is over-rated.  So, get over it.

A fair few open-minded people of my age who, over then decades, have seen and loved the (early)  Antz, Bauhaus, Danielle Dax, Daisy Chainsaw, Die Cheerleader, Babes in Toyland, the ‘seen it all before’ brigade are as impressed with Hands Off Gretel as I am. It is fucking great to see / hear a band again with that much, energy, passion, verve and a bit of style ( rather than drab fake-indie bland-brand bands).

This debut album  (and a simultaneously released  Bedroom Sessions of demos & acoustic tracks of songs which didn’t make the album) are the chance to prove that they are not a triumph of Style & Image over content and songs. There are some absolute killer moments on this debut album, but it did need trimming down and the running order thought through a bit more. It should end on one of the better, climactic tracks.

The first two tracks I suspect are the newest; Queen (of the) Universe and One-Eyed Girl are the circus of horrors, sci-fi, horror-punk fantasy songs which inspired my opening dream sequence.

The rest of the album are songs of self-analysis, paranoia and mania. They dramatize relationship traumas and the shit-people-do unto-each-other.

A song entitled ‘Oh Shit’, stretches the  ‘Oh’ tortuously and throatily over six syllabubbles.  Like this “Whhhooo-oooooo-ooooooo-oooooooo-waaaaaa-aaaarrghhhhhh! SHIT!”  Although dismissed as  being like a Nirvana B-side here, it’s one of my favourite tracks.

Lines like ‘I’m a perverts dream’ and a hint at incest are provocative stuff but part and parcel of the ‘freedom’ which makes up Laurens manifesto.

I could give you a track-by-track run down, but if you’ve read this far and watched the spectacular video for One-Eyed Girl then you get the idea.

Hands Off Gretel are the single most exciting young band in the UK with a potentially huge demographic (every sullen, depressed teenager and Nirvana fan) just waiting for them to take over popular culture in a blaze of sexual, punk-rock energy and theatrical show-woman-ship.

Other reviews that are well worth reading are …

The album is on I-Tunes

Note; the quotations attributed to Lauren Tate in the ‘fantasy sequence’ at the beginning of this review are purely the invention of the author and were not real quotations from her.

The section in question is written in-a-style reflecting, parodying and celebrating the nature of some of HoG’s lyrics which contain sexual and fantastic imagery and is not intended as demeaning to Lauren or indeed, women.  I am only stating this as accusations of ‘sexism’ etc in the comments section become tedious.