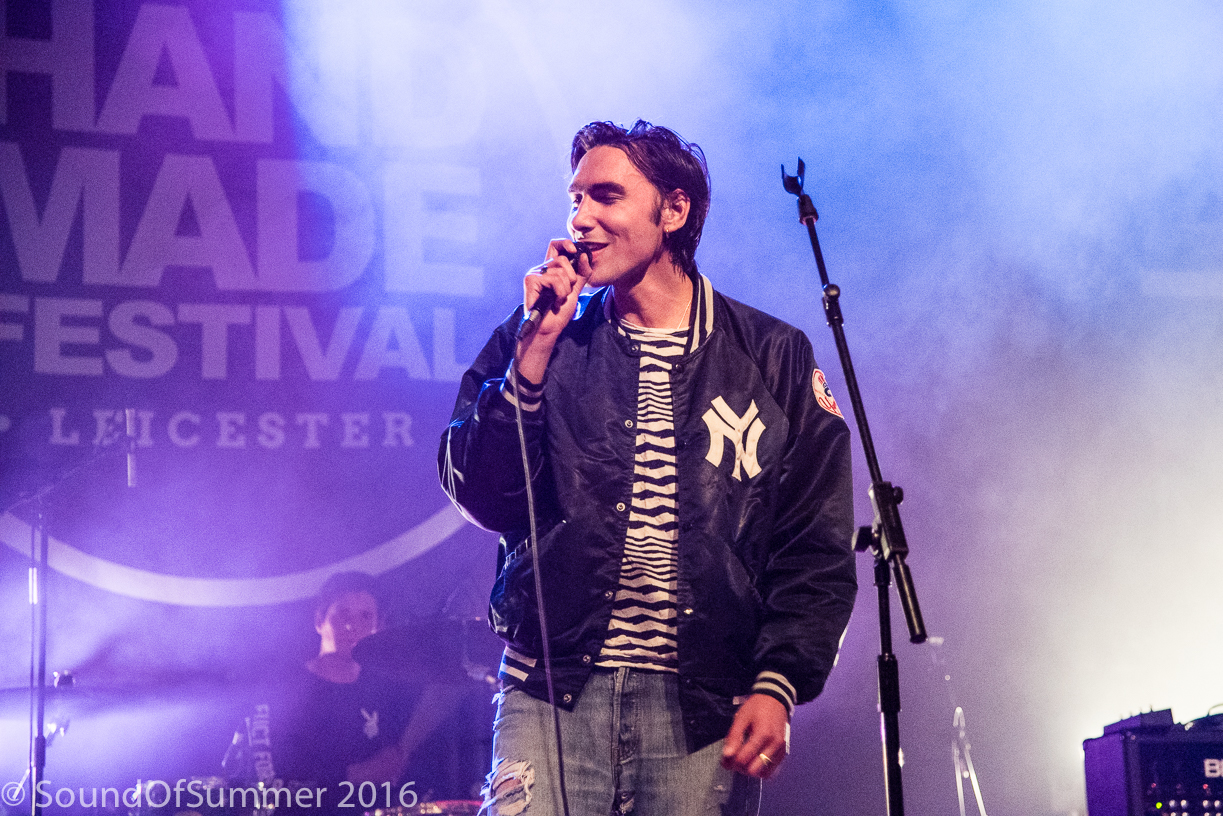 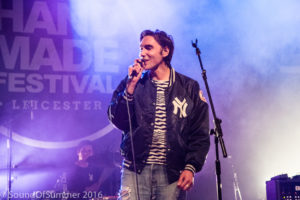 Last weekend saw me heading north with my wife for my first experience of Leicester’s Handmade festival.  I found four stages of great music in an indoor environment and enjoyed  a relaxed weekend amongst the excitement of Leicester City making a fairy tale come true.

Handmade festival is interesting as it is based at Leicester’s O2 academy which itself is based on the campus of the University.  The music is spread across four stages within the venue with some fringe events elsewhere in the city centre.  As you can imagine the festival focuses on emerging talent with a few better known acts as headliners to ensure that tickets sell.

The music line-up is eclectic with 65 Days of Static and We are Scientists topping the bill.  Our day started at the main stage with indie rock outfit Ash Mammal who had attracted a decent sized crowd for so early in the day.  With a 5pm start it was always likely to be the case that the crowd will build during the evening as it most certainly did, but from the beginning of the evening there was a great atmosphere from the mostly student aged audience. 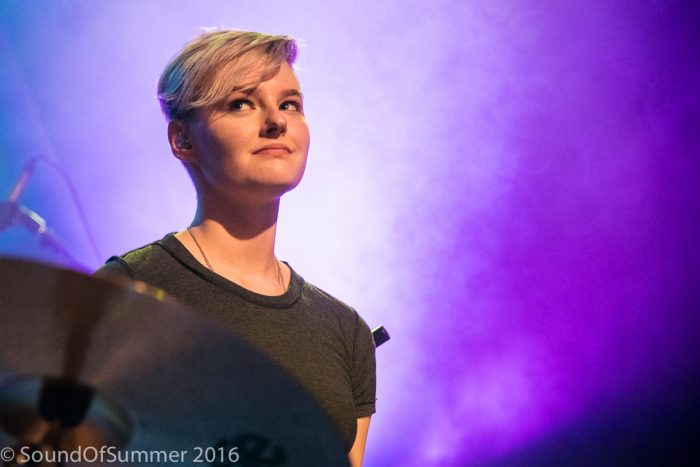 I must confess that two of the mainstage acts for the evening really didn’t float my boat.  The experimental outfit Her Name Is Calla left me cold.  Let’s just say that they are so experimental that they were 15-minutes into their set before I realised they had actually begun.  I had assumed that they were still trying to sort out the sound and the guitarist was playing with his cellphone on stage, I hadn’t realised that this was part of the show.  Once I realised they were actually playing their set I scuttled off to find something more to my taste.

I found it at the Cave Stage with Reckless Youth.  I thought these guys were absolutely excellent but frustratingly they were 20 minutes late starting a 30 minute set.  As a result this meant they only had time to play for about four songs.  I’m sure they will have a great reason for being so late but sadly this is just unprofessional.

The stars of the day for me played back to back on the scholar stage.  Black Honey and Pretty Vicious both turned in stunning sets with a ton of energy in front of an very enthusiastic and appreciative audience.  The Guardian identified Black Honey as one of its bands to watch this year and they showed why.  It is great to see a female fronted band doing so well and singer Izzy Baxter showed why the Brighton four piece are so highly regarded. 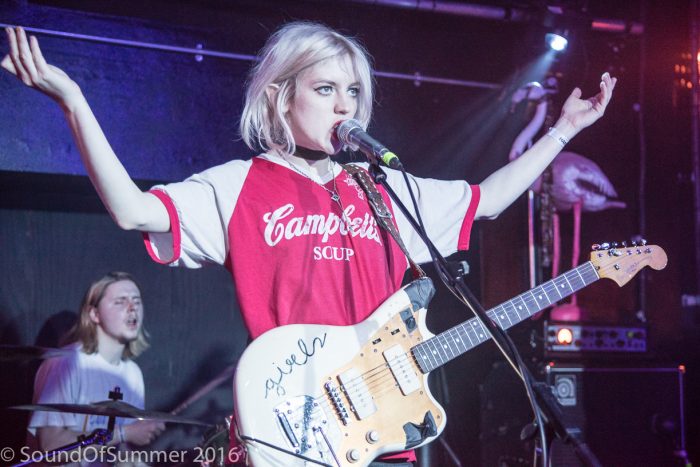 Pretty Vicious have been knocking on the door of the big time for some time now and are very highly regarded.  Having already played at Reading & Leeds Festival and Glastonbury and supported the like of Manic Street Preachers the punk tinged rock outfit are surely headed for the big time.  For this ageing punk seeing the like of Pretty Vicious, Palma Violets and AllUsOnDrugs breathing new life into this scene is a real shot in the arm.

65 Days of Static need no introduction, they have after all been around for well over a decade.  Their electronic based, instrumental post rock sound is the sort of thing you either like or don’t.  Their music is the sort of thing that it is great to chill out to through if I’m honest I like my rock a deal heavier and with more of an edge.  I was also hugely frustrated that the played their entire set without any front of stage lighting meaning that bright backlights made it totally impossible to shoot anything more than silhouettes.

Headliners We Are Scientists have also been around for pretty much the whole of this century.  The Indie 3-piece from New York have six albums under their belts and are well regarded by the UK audience.  It did the band no harm that they praised Leicester City to the high heavens something that certainly got the majority of the audience even more on-side.  Their sixty minute set went down very well with the crowd and as the first day of Handmade festival drew to a close I am pretty sure that like me the audience will be looking forward to a great day on Saturday. 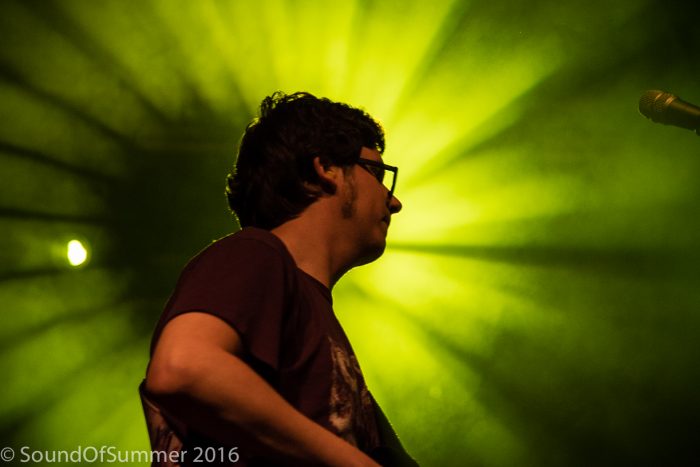 Saturday at Handmade festival saw us starting our day watching Jurrasic Pop.  Seriously, whoever thought that a rock band could make a set out of writing songs about Jurrasic Park but these guys do, all of their tunes have the hit movie as their central theme.  Somewhat amazingly not only do these guys do this but they pull it off.  They were a great fun start to the day.

It was great to see that BBC Radio Leicester had converted the Academy 3 stage to a BBC Introducing venue for the day and in the spirit of the scheme we were introduced to an excellent lineup of new and largely local bands.  For me at least the pick of the day was Arcades, a young band from Leicester who had brought along a considerable bank of support. It is always great to see a young band with a dash of flamboyance and a huge slice of confidence.  These boys are already working their audience with aplomb and for me they look to have a bright future.

Over the course of the weekend at Handmade festival Union Square became my favourite spot at the festival.  It is a bright and airy space with tables, sofa’s and seating as well as a  Starbucks and a couple of eateries that were  closed for the weekend.  The Starbucks had become a real ale bar, the diner a comedy and cinema club.  The feature a small stage with an acoustic vibe.  We thoroughly enjoyed Fallers and She Makes War in that space, it was just lovely to be able to relax with a beer listening to great sounds and watching the world go by. 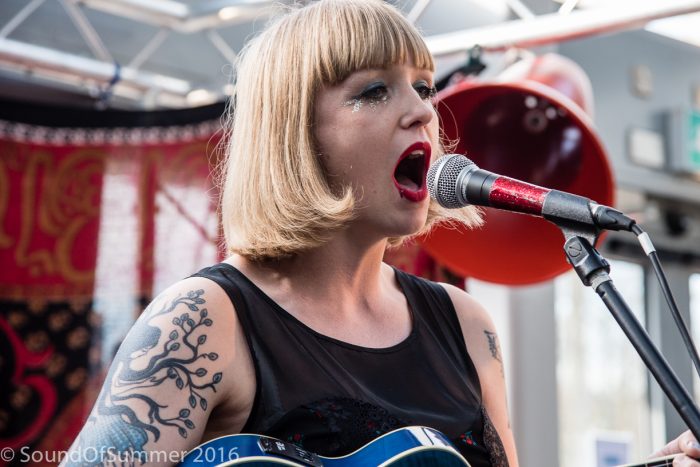 Union Square also offered what turned out to be my favourite experience of the weekend.  At 7 PM the square was taken over by House Of Verse which saw us treated to a non-stop stream of spoken word artists, poets and beat boxers.  I have to tell you that I would normally give this sort of thing a wide berth but I am so glad that we took the decision to check  it out.  The whole evening was incredibly entertaining, so much fun alternatively hilariously funny and jaw droppingly amazing.  The skills employed by all of the artists was simply mind boggling.

Of course the central theme of Handmade Festival is the music and there was plenty on offer for audiophiles.  I enjoyed all of the bands I saw across the day but Lonely The Brave and Deaf Havana were both outstanding.

Lonely the Brave have been on my radar for some time now but I had not managed to catch them live.  The Cambridge based Alt-rock outfit turned in a blinding set that was really appreciated by the large crowd who had gathered to pay homage.  The band treated us to a high energy 60 minute set but I was struck by the contrast between singer  David Jakes and his bandmates.  Jakes spent the majority of the set stood still on stage, arms folded across his chest his face hidden under a baseball cap.  The sense of Jakes isolation was added to by the lack of front of stage spotlighting for their set.  Onstage lighting was dramatic but for a photographer the lack of front lighting makes for horrible photographs.

The day was rounded out by headliners Deaf Havana.  The Norfolk five-piece’s star is certainly rising and their set showed just why this is the case.  This is a band who ooze confidence, they are tight and dynamic, they connect with the crowd in a way that few bands manage. 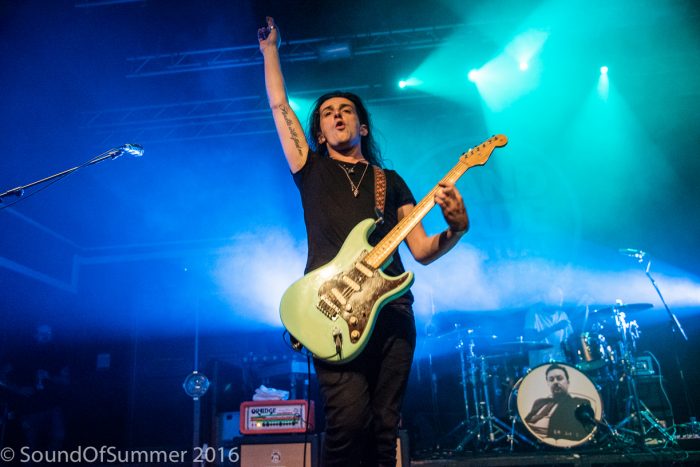 Sunday at Handmade festival seemed to fall a little flat as numbers were down in comparison to the previous days.  It may have been that fans stayed home to watch Leicester City play Manchester United in a game that could have secured the premier league title.  The smaller crowds meant that much off the buzz had died down substantially, this was a real shame because the line-up was superb and the bands gave their all.

Southampton band Waking Aida together with Los Campesinos and Beans on Toast were my picks of the day.  Waking Aida play hard rock without lyrics.  These guys let their instruments do their talking for them and I must say that the guitar work was exemplary.  Cardiff based indie outfit Los Campesinos were a revelation to me as they stormed through their 60-minute set.

Of course Beans on Toast never fails to delight with his acoustic story telling.  Over the years Beans on Toast’s honesty, combined with a stage presence guaranteed to bring a smile to your face, has won him a host of fans the length and breadth of the country. Tonight was no different and the man himself turned in a performance fitting to close any festival.

Handmade festival turned out to be a real treat.  With fur stages of spoken word and a comedy club situated in one building we were able to enjoy an early season festival in warmth and comfort.  The lineup was excellent and the event ran smoothly as a result of good organisation.  There was only one small drawback to hosting Handmade festival in one building, inevitably there was some noise pollution between stages.  For most acts this isn’t an issue but it did become a distraction when a heavy rock outfit was up against an acoustic set.  That said this was a minor inconvenience when you consider how much shoe leather was saved by not having to walk long distances between stages.  The luxury of staying warm and dry for a festival so early in the season made Handmade festival a surefire winner.