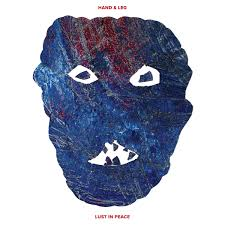 Second album by noisy Greek post punk duo Hand & Leg, a follow up to their eponymous debut from 2017. The CD version features extra track Omonoia…LTW’s Ian Canty gets an ear bashing and seems to like it…

I knew precisely nothing about Hand & Leg on receiving this album, but on balance I really rather glad to have made their acquaintance now. Hailing from Athens in Greece, the pair of Iro Sofoulaki (bass and vocals) and Stelios Papagrigoriou (drums, vocals and some synths) make a colossal noise which sounds like there are far more than just the two of them. If the female/male drum and guitar pairing had you expecting some kind of lame and outdated White Stripes-style Led Zep homage, think again bucko! Because Hand & Leg don’t deal in anything so loser friendly, instead sending one head-first into a macabre, eerie world of fear, sex and noise.

The Hand & Leg world is very much the stuff of black comic nightmares. The only comparisons I can make lyrically are with weirdo early 80s Attrix Records act Birds With Ears or Stump circa Mud On A Colon, fleeting visions of extraordinary life viewed through misted up windows. Not so much songs, more a constant train of bizarre images. But H & L don’t sound like those bands at all.They bash out tribal rhythms on the drums, pile on bass heaviness and fuzz, plus the occasionally synth line or treated vocal to add to Iro and Stelios’ own voices.

Lulling the listener into a false sense of security on the cannily titled Faux with a cheesy synth line, soon the song crystallises into a grungy, grimy rhythm with buzzing bass feedback. The repeated refrain “wanna see my dirty teeth?” becomes a chant as Hand & Leg accelerate forward into something you could call industrial post punk, but really the contents of Lust In Peace are much harder to pin down.

The brutal march of Softyhead broods in an hypnotic fashion and the thud of L.I.P. goes onto a fuzzy, mud-caked climax, intoning that “I like to suck old people, cause they’re smelling of death”. Spit In My Eye hints at a seedy sexuality, a bad acid trip with dreamy vocals above the clamorous percussion. Both scary and seductive, there’s a Metal Box PIL-style to the bass and drums overload here.

Next we find Bahamas, full of feedback, bass riffs and an almost jolly male vocal. It’s a bit like a sea shanty gone very wrong. Grave Gravy goes back to Spit In My Eye’s subject matter, all about death and sex, this one starts with just a couple of distorted bass notes and a plaintive, pensive vocal. Then business begins to pick up, with shouting, screams and mayhem, before returning back to the static, eternal-sounding figure of the drums and bass.

Rooftop Spell sets off with a chant of “Want to meet me on the rooftop”, not an invitation I would want to take given the unhinged delivery. An unnerving verse takes in human failings/rigor mortis as positives – or though I’m still not entirely sure that was what was meant. The puzzles that Hand & Leg set are a big part of the appeal – information is distilled in short bursts on a “need to know” basis. Anyway a treated voice heralds the start of Shoplift, this one is almost a singalong, very catchy in fact if you ignore the all-round cacophony.

They do kind of resemble Neu! on Peter Pancake (with a bit of early Hawkwind added in), but not that motorik beat that is template for every other lazy indie band trying desperately to be interesting. No this is the upbeat Neu! of Super, which everyone has forgotten about, the Neu! that predicted the style DAF would adopt many year later. Lush Throw is even a little like toytown pop music (well up to the last line “It’s not fucked up it never fails you”), an organ/synth line and a real hook-line. They’re playing with us, but I like it

Last track Omonoia is the most fully formed “song”, in that featuring five stanzas, but the mismatch of ideas makes it difficult to draw any firm conclusions. Which is as it should be and the music’s sense of dread pushes the thing along in a relentless style.

Lust In Peace is 32 minutes of off-centre mayhem, a sound and place all of its own, confusing in a beguiling way. The songs are more nightmare images that flash past, leaving just a vague but very unsettling impression. Kind of like things sighted from the corner of your eye you aren’t entirely sure were really there, but spooked you out anyway. Looking for something not like anything else? Hand & Leg can give you a footstep into the future and a foothold in their weird but great world.