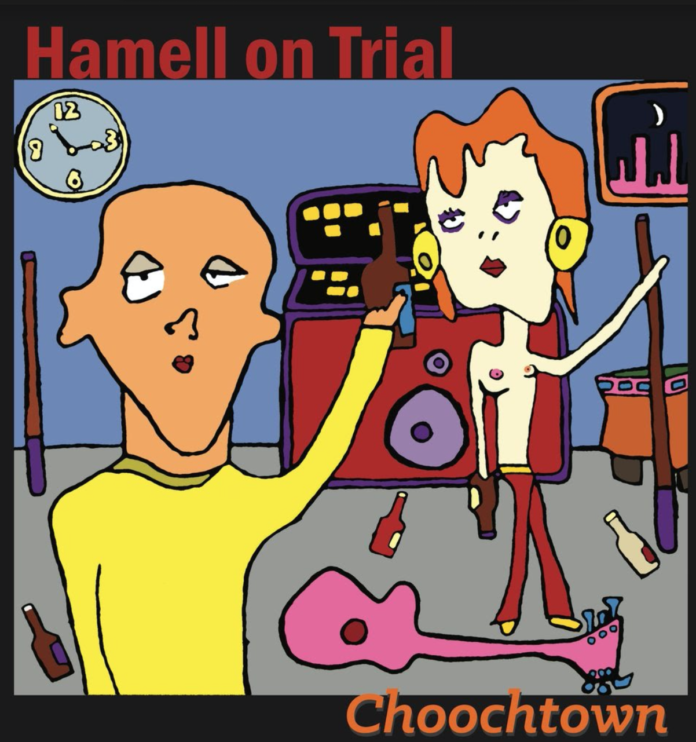 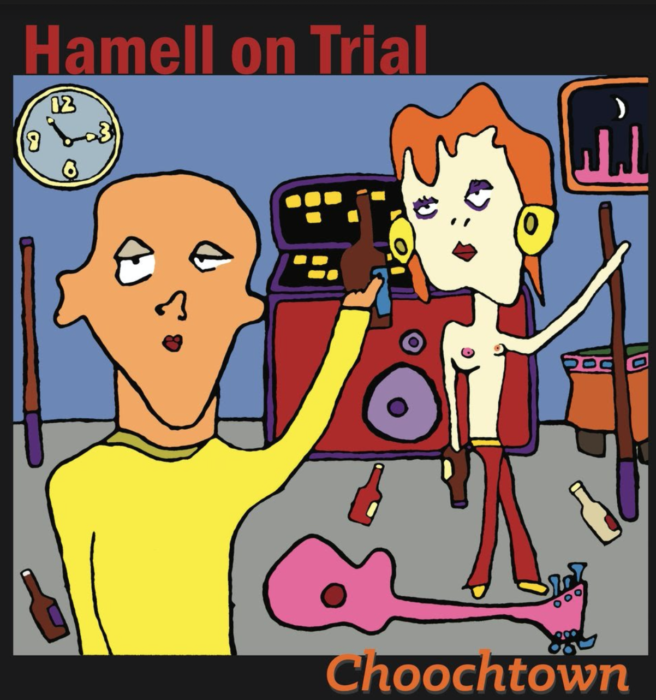 In 1999, Hamell on Trial swept aside the studio sheen that coated a handful of tracks on The Chord is Mightier Than the Sword (1997) in the assembly of Choochtown, which Hamell
considers among his best work. The Choochtown reissue on New West Records
(pink vinyl, compact disc, digital) reminds us of Hamell’s sustained prowess as a guitarist,
singer, and wordslinger. Great stories and brilliant lyrics abound on this album: see “This is too important to let slip through his fingers / Like sand, like plans, like smoke,” from “Joe Brush.”

Anti-folk, like folk, is best listened to live, and the immediacy of the DIY production helps
animate Hamellian heroes and anti-heroes alike, from big-hearted Bobby (as long as he’s high), to Nancy the serial, motorcar monogamist, and Chooch the mercenary man. As the Hamell- heads among you know, Hamell’s affection for working-class heroes thumps steadily through his entire catalog. The tracks from the “basement tapes” of the Choochtown reissue add new depth to the album’s DIY virtues, and make it a must-have for newbies and devotees alike.

In 1999, Hamell’s a free agent, socializing in Philadelphia at Ruffhouse Records (The Fugees, Lauryn Hill), where he befriends guitarist and engineer Billy Nicgorski. Nicgorski convinces Hamell to record his next album with Nicgorski’s house band, in his studio basement, beneath the home of his mother and father. “Mrs. Nicgorski single-handedly could have given Catholicism a good name,” Hamell said at a recent house concert I attended. “She was always taking in stray kids from the neighborhood.” “The Strays” served as the house band. (A kid named Jay Mehler, who can play some guitar, and later did with a band called Kasabian, lived there, but didn’t sit in on these sessions.) Most nights, recording commenced after two a.m., once the bars closed and The Strays scampered home. On the album version of “Nancy’s Got a New Boyfriend,” it’s Hamell on guitar, and Hamell on vox, and Nancy’s hitchhiking journey is over and done in under two minutes. On the first of two alternate takes, The Strays plug in, and slow down Nancy’s quest, five boyfriends in all, to a more moderate 2:15. This track (and others) have some great analog distortion, likely the result of overused analog tape, and you feel for Billy as his gear seems to ache under the strain of the energy of the room.

Hamell’s a what-would-Joe-Strummer-do kind of guy, and “Uncle Morris” offers a domestic
homage to The Clash’s spoof of xenophobia in “Hate and War.” Twenty-two years separate
these songs, and few folks would dare represent sentiments like these in times as difficult as ours. Still, the tune is a prophetic period piece. Check out the growling chorus of “Uncle Morris”:
“Arm yourself!” says Uncle Morris, “Meet me in the fields at night /
“Bring along the Constitution, and teach the children how to fight.”
It sounds like something you might have overheard in Charlottesville, VA, August 2017, either on the side of the white supremacists, or the side of the antifascists. Hamell and Nicgorski (drums) take a more moderate pace on the “Uncle Morris” outtake, which sounds like an early rehearsal track: the duo falls out of sync at the cadence, as if they hadn’t yet bothered to determine how the song was going to end. It’s not the only track from the basement tapes that possesses such charm.

On Choochtown, too, Hamell introduces his fans to his paintings, which frequently offer homage to his heroes. A key influence on this album was Quentin Tarantino: Hamell dug the narrative structure of Pulp Fiction and offers his own variation here. On “When Bobby Comes Down” and “Choochtown,” their respective protagonists cross paths in a diner, with Bobby (alas) sobering up, and Chooch shaking some guy down. Among the most radio-friendly tunes on the albums is “The Lottery,” with its images of decadence, American style, and catchy chorus and phrasing. It captures all too accurately the retirement-plan dreams of millions of Americans–through no fault of their own, of course. “Lottery” has a bittersweet tang, too, since it’s written by one of the hardest-working men in show business, and prophesizes that maybe, just maybe, hard work and talent and a gorgeous, balding pate might not reap their just desserts in the music industry.

Other standout tracks include “Hamell’s Ramble,” “I’m Gonna Watch You Sleep,” and “The Long Drive.”
If the basement tapes evoke the production ethos of Steve Albini or Don Zientara, they carry only a wisp of nostalgia. I shared engineering duties on some fun, gritty albums in that era, and both the original tracks and the basement tapes endure well. I like to think of Bruce Springsteen in the Nebraska sessions, in a less reflective mood, hopped up on Red Bull (a lot of Red Bull), with engineer Bill Price (The Sex Pistols, The Clash) behind the console.

Hamell’s sense of fun back then? It’s still a lot of fun today. And the vinyl reissue is pink, which is totally fun. What’s not to love?

Bio: Andrew Garver is a Grammy-nominated mastering engineer, who worked for years at A&M Studios on a large number of projects including U2, Chris Cornell, Alice Cooper, Black Sabbath, and The Voodoo Glow Skulls. Andrew now works with a variety of established and emerging artists as a freelance mastering and mixing engineer. Contact him at www.144audio.com.