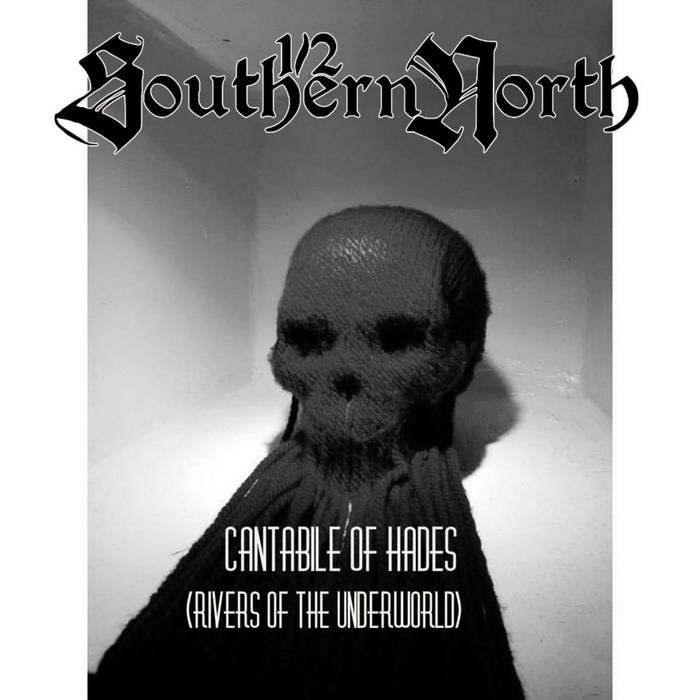 Cantabile of Hades (Rivers of the Underworld)

½ Southern North (pronounced Half Southern North) is a one-woman musical project formed by IDVex in 2013 in Greece and is an utter experience for the ears, Emily Oldfield reviews for Louder Than War.

Showing us the layers of sound which surround the depths of Ancient mythology, influenced by the fields of black metal, drone, ambient and experimental ability to craft darkness makes distance meaningless – this is music which seeps into the recesses of your being and makes you reflect.  For those who may presume ambient and experimental music to be ‘unemotional’ or even ‘dull’ – think again.

The opportunity to embark of the sound of ½ Southern North could start with “Cantabile of Hades (Rivers of the Underworld)”, a 3 track digital album now on Bandcamp – and the basis of this review. It is a varied release which invites the listener to experience a range of volumes, poetic visions and soundscapes.

On ‘Cantabile of Hades (Rivers of the Underworld)”, the track titles take their names from 3 of the 5 rivers into the underworld (Hades) according to Ancient Greek Mythology. The first track is Flegethon (River of Flames), the second Kokytos (River of mourning) and finally, Lithi (River of Oblivion).
These are lengthy, exploratory pieces which, like water, both nurture our interest and yet are weighted with mystery, ever-aware of the sinister.

‘Flegethon’ opens with echoing, almost trumpet-like synths and trickling rhythms, which provide a sense of immersion almost immediately. What unfolds is a spiralling, haunting soundscape –  high crying harmonies from IDVex echoed by twisted voices. It is like the expression of an identity falling from life into the underworld; utterly intriguing – and the vocals crafted like an instrument to convey this sense of descent. The fall into the ‘flames’, so to speak, builds in intensity before a gradual de-layering.

Kokytos (River of mourning) is a contrast, with gentle pan-pipe sounds plunging the listener’s consciousness to look inwards. A track which calls on the individual to contemplate their own mortality, it mixes a melancholy entrance of shimmering synths and slow, steady bass with the increasingly layered vocals of ‘Where have you been my friend?’. It is an urgent plea, and IDVex’s vocals are volumized with a striking amount of emotion shaking the notes – beautiful to hear, though so bitter the subject. The track arches into her acknowledgement of ‘my fading life’, bold and unabashed, as if expressing that if death cannot be prevented, then what will be prevented is going quietly.

The second refrain of ‘where have you been my friend?’ is cast in an almost doubled cry, developing harmonies of its own – before disrobing the layers of sound ‘close to the end’, with just dwelling keys and a struck bass. Like the first track ‘Flegethon’, a particular stand-out skill of ½ Southern North appears to be the ability to build up and break down songs, as if possessing a tide. Considering the link to water in the track titles, this is very perceptive and powerful indeed.

The final track of the EP is less melancholic initially: Lithi (River of Oblivion) prioritises the high notes and beauty above the depths with sounds of gentle harp, humming synths with occasional sharp notes and flowing vocals. This builds into an interchange of notes and vocals, thickened with echo as if a battle between life and death – the high soaring hope contrasted with the dark, dwelling bass and increasing layers of twisted echo. The vocals grow almost chant-like, even desperate, and although the harp melody continues, there is turbulence wrapping around. It really is a mysterious, moving journey of sound and thanks especially to IDVex’s ability to imbue her voice with emotion, the listener is led along to see whether it is life or death that prevails.

This is an EP of real depth – and the answer seems to be that life prevails, powered by the beauty of the music to convey it. Melancholic in mood, but so richly meaningful – you will listen and be inspired rather than intimidated, that’s for sure. It’s like taking something away from death – seeing a side to it and showing it through sound. A victory.