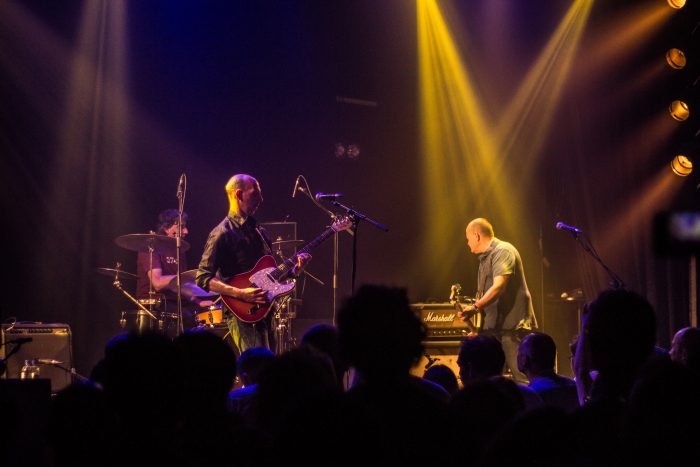 Half Man Half Biscuit

As autumn descends, Half Man Half Biscuit provide the light at the end of the tunnel.

I bet Macca and Ringo still gaze across the Mersey at Birkenhead occasionally, thinking wistfully about the band they could have been. Half Man Half Biscuit, the ‘Four Lads Who Shook The Wirral’ came the Komedia on Thursday as a three-piece, with guitarist Ken Hancock missing from the tour through illness. He was much missed by a vast army of well-wishing veteran acolytes, but even with a three-quarter line-up, they didn’t half entertain.

Starting out as lippy kids in the mid-80s, they have graduated to 21st-Century comic curmudgeons, whilst singer, Nigel Blackwell, supplies the drollery of a football terrace wag or pub philosopher between songs. Whereas many Bathonians ask ‘Are we in the North now?’ by the time they approach Worcester on the M5, Nigel showed his South-West savvy, impressing us with a geographical Sat-Nav masterclass of his journey to the venue, road-by-road from the M6 to the Komedia’s door. And he pointed in exactly the right direction for the Quantocks during Joy Division Oven Gloves.

Their attention to absurd detail remains admirable. If the BBC ever brought back Telly Addicts or Pop Quiz, I’d want these fellas on my team. Lyrically, Half Man Half Biscuit have made a career out of popular culture without ever pandering to it or being a part of it. They have clearly been brought up on a diet of exquisite televisual nourishment, exemplified by World of Sport Wrestling (“I can put a tennis racquet up against my face,/ And pretend that I am Kendo Nagasaki”), Grandstand (Bob Wilson, Anchorman) and Brian Cant (Trumpton Riots/Time Flies By).

They dissect modern life with sardonic subtlety, employing pissed logic with chilling sobriety. Seeing HMHB live feels like mental decluttering, as they debunk bullshit and hold soft aspirationally-middle-class blerts under the microscope. Performing suburban satire Paintball’s Coming Home, with the lyric, “They buy soup in cartons, not in tins” will have made many an audience member feel decidedly self-aware. That’s especially in a city with a predominant Waitrose and one whose fabric nearly crumbled during the houmous shortages immediately after the Brexit vote.

With their punk ethos and indie stylings, they frequently sound like the Pixies gone Pythonesque, as they did on bass-heavy Neil-Crossley-driven tracks like National Shite Day and Reflections in a Flat. The instruction, “Let it happen, bass player” before Time Flies By, could precede most songs for the substance he endows them.

Our HMHB bingo cards were well dabbed, as Fuckin’ ‘Ell It’s Fred Titmus, All I Want For Christmas Is A Dukla Prague Away Kit, Quality Janitor and Running Order Squabble Fest ensued, the latter evoking the chaotic spirit of the recently-deceased festival season. The only straight-up and serious song of the night was their familiar cover of recently-deceased Glen Campbell’s Rhinestone Cowboy. Although a staple in their set for a while now, it held extra poignancy as a posthumous tribute this year.

In the modern-day race for popularity and approval, it’s as if they’ve chained themselves together and laid down behind the start line. They got away with lyrics such as “I’m off to see the Bootleg Beatles,/ As the bootleg Mark Chapman” on When The Evening Sun Goes Down and on Rock And Roll Is Full Of Bad Wools, they warned against over-hyped “Troubadours feted by the heavyweight press.” That very evening, the heavyweight press set up its media circus for the Mercury Prize ceremony in London. A million miles away, in a place called Down-To-Earth, Nigel Blackwell began proceedings with “I see Zippo’s Circus is coming to town; you lucky people.”

Getting older can be a bit rubbish. One of the joys, however, is that you can develop some outstanding laughter lines from evenings with Half Man Half Biscuit.

You’ll find Half Man Half Biscuit conspicuously absent from Twitface and all such social media malarkey.