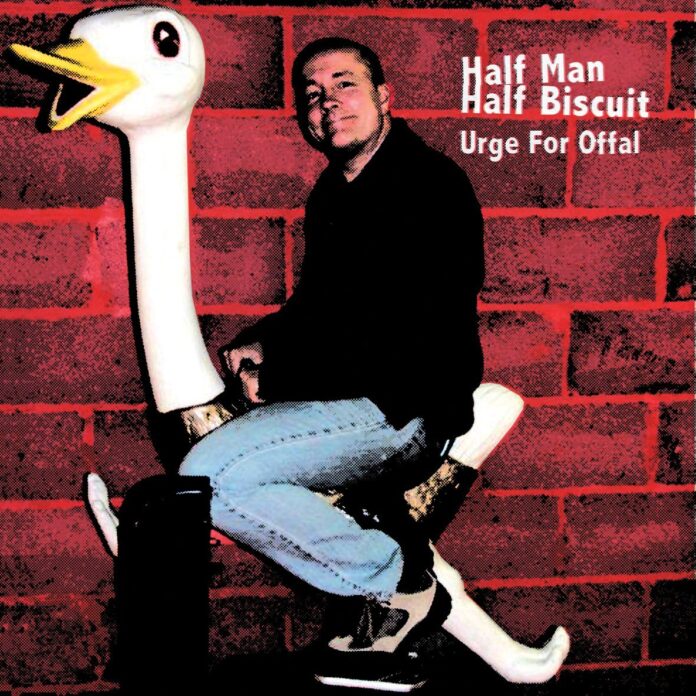 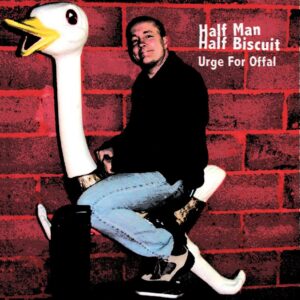 Half Man Half Biscuit – Urge for Offal (Probe Plus)

Favourites of the late John Peel, Half Man Half Biscuit have a new album out which Mark Whitby reviews for us below.

We tend to demand the impossible from bands who’ve been a much-loved part of our record collections for so long. On the one hand, we’re looking for something original and new from them. On the other, if they strayed too far from the beloved template, we’d sulk.

Half Man Half Biscuit consistently manage the balancing act with ease. Every time they resurface with a new album there’s something both satisfyingly familiar and refreshingly new about it. Cammell Laird Social Club and 90 Bisodol (Crimond) are, for me, two of the unquestioned artistic peaks of the current century; yet, even in such magnificent company, Urge for Offal doesn’t just avoid disappointment – it carves out its own very distinctive niche in the history of one of our most treasured bands.

I recall Andy Kershaw calling HMHB the greatest English folk band since The Clash. Arguably, UFO backs this up better than anything in their long history. The musical and lyrical deftness on display continue to place them in a class of one. Its title track, the tale of a short-lived band who reached an artistic peak when scrawling their name on Harwich-bound lorries, combines a wit and melancholy that resonates throughout the collection, in such glorious offerings as ‘My Outstretched Arms’ and especially ‘Old Age Killed My Teenage Bride’, whose lyrics nudge up close to emotional poignancy and occasionally collide, brilliantly.

Of course, you wouldn’t want any Half Man Half Biscuit release to be bereft of arch and occasionally surreal observations and Urge for Offal doesn’t disappoint here either. Images of Frank Ifield on a windmill gleefully take their place alongside crushing dilemmas such as whether or not to take the M6 toll road. There remains an admirable refusal to make concessions to their potential audience’s reference points. There will be many enjoying the album regardless of not knowing who Gerry Gow is, who lack an intimate acquaintance with a 1978 Panini sticker collection that seemed suspiciously overloaded with Bristol City players, and who have certainly never used a two pence piece to make a phone call.

Even in such glorious musical company, ‘The Unfortunate Gwatkin’ secures an uncontested place in the pantheon of this band’s greatest achievements. Here, the melancholy shares bed space with the kind of humour that, in anyone else’s hands, would probably turn out at best cruel, at worst cloying: Nigel Blackwell typically dodges both with ease, dragging an almost impossible sense of the bizarre out of the swirling pathos until we reach the refrain of ‘Cresta: What the fuck were we drinking?’, surely 2014’s finest lyric.

In a too often sterile and ugly world, we need someone to come along regularly and remind us that essentially we all inhabit the same strange and ridiculous reality and that it’s the odder details that are worth laughing at or crying along to. It’s one of the many functions that Half Man Half Biscuit perform better than anyone else.

Half Man Half Biscuit can be found at their website: cobweb.businesscollaborator.com/hmhb.

All words by Mark Whitby. More from Mark can be found at his Louder Than War Author’s Archive.