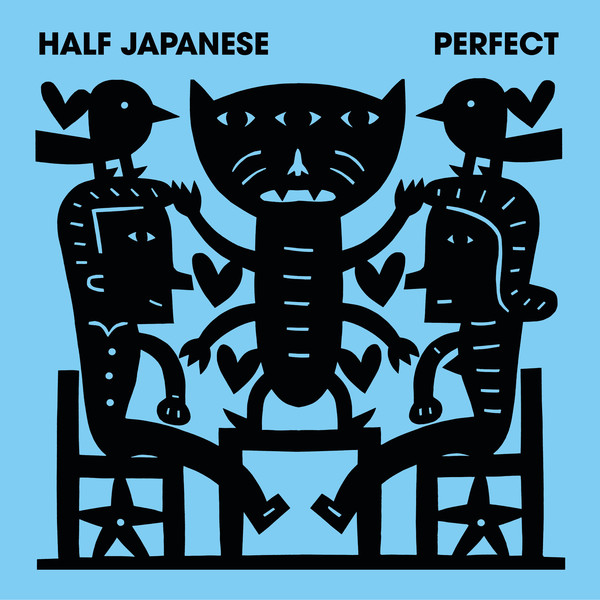 Perfect is Half Japanese’s fifteenth long player and their second on Joyful Noise Recordings. Half Japanese have a hell of a history. Their band members, their prolific output, their artwork (Jad Fair’s amazing prints) and perhaps most importantly, their historical and continued influence on bands. They have been around and led by Jad Fair for an astonishing 41 years (!) and still continue to make music that can be labelled post punk, lo-fi, experimental, alternative rock, punk rock, weird, oddball  or perhaps maybe just bloody great music??!!?? I won’t bang on about their history. I haven’t the word count. So please look them up and realise how important they are before going any further.

This album continues very much in the vein of both recent and early releases – if ain’t broke then don’t fuck with it eh? And it starts with the delightfully noisy and distorted ‘That is it’. With a simple chord structure and shouty lyrics, this starts the album perfectly. The LP carries on in this vein with ‘we cannot miss’, but with more of a spoken word delivery from Jad. With its abrasive guitar, tribal drums, spoken word, punk, etc, this album appears to have the entire alternative musical genre bases covered! The album feels very optimistic and upbeat. ‘A new beginning’? Also you get this feeling on ‘Hold on’ and ‘we’ll go far’. The band just seem to be having a lot of fun on this record!

There are great riffs abound on this album and the drumming is phenomenal. The mixture of singing and spoken word works perfectly. Jad is incredibly prolific, not only with is music, but his artwork. There are a mindboggling amount of visuals and ideas represented in both his artwork and musical output of Half Japanese. However, quantity by no means affects the quality. Quite the opposite. Bring on LP sixteen please. Thanks Jad!

For further information on Half Japanese, please check out their Facebook.