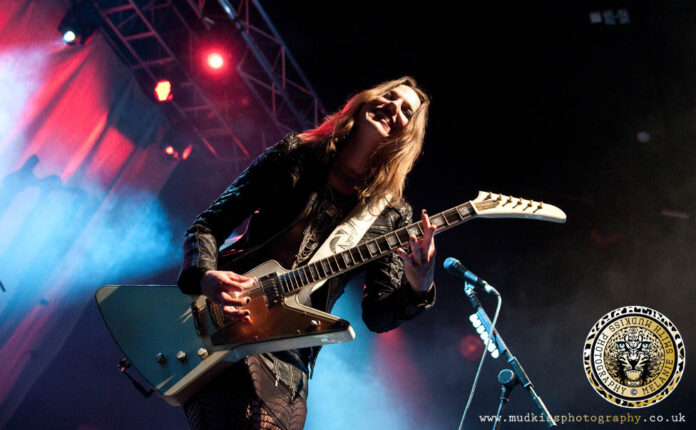 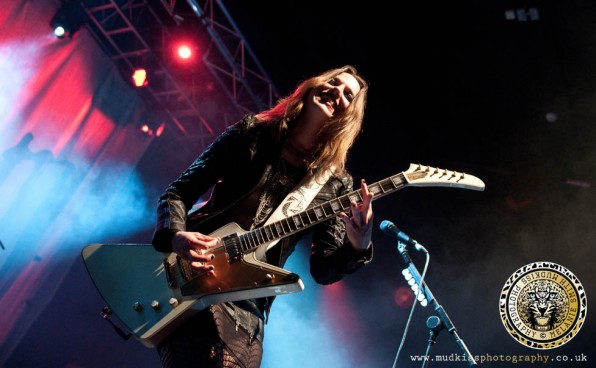 Pennsylvanian rockers Halestorm are currently in the middle of UK tour which took in Manchester’s Academy last week. Louder Than War’s James Lowther  (words) and Melanie Smith (photos) were in attendance and their combined review is below.

When I first started to review gigs, I never expected to be reviewing a band so far out of my comfort zone. In the past couple of weeks I’ve seen Manic Street Preachers, Chvrches and We Are Scientists. I’m completely at home stood there silently appreciating and nodding along to the indie stylings of bands like Everything Everything. So seeing Halestorm was a completely alien experience to me. That’s not to say that I didn’t enjoy it – in fact, it was an incredibly surprising and enlightening experience and it was amazing to be part of such a diverse crowd of people. 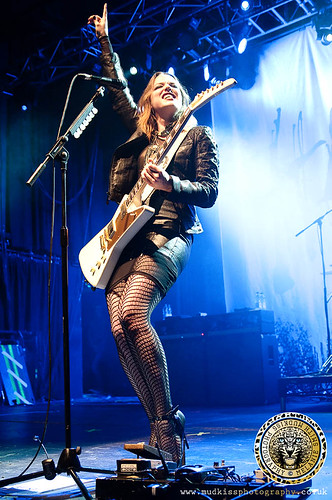 I only caught the last few songs of the first support act, The Smoking Hearts. As with most of the night, the band were loud and energetic – jumping about the stage and screaming. I enjoyed it but it wasn’t quite my scene, so it’s difficult to make any comments about how good they were. They certainly got the crowd going. It’s funny, the most difficult thing about writing this review is that I really have nobody to compare these bands to.

The second support act, Dayshell, really surprised me. Their show was a whirlwind of passion, shouting and getting the crowd pumped. Their energy was infectious and although it was difficult for me to tell one song from the other, I can’t really say that’s a bad thing. In any case, their show was good enough for me to check out their music afterwards and for me that’s the sign of a good support act.

So what’s left to be said about Halestorm? Take it from me, as somebody who isn’t particularly a fan of hard rock and who really had no idea what to expect, Halestorm pretty much blew me away. When I first found out I was about to be seeing a female-fronted hard rock band that has toured with the likes of Avenged Sevenfold, Disturbed and Papa Roach I thought the show would be angry and loud and, well, boring. It was angry and loud, sure. But boring? I don’t think Lizzy Hale knows the meaning of the word.

Despite the fact that I hardly knew a song from their setlist, Halestorm’s songs are finely crafted to be crowd-pleaser’s and soon enough I was singing along to ‘I Miss The Misery’ and ‘Mz. Hyde’. What surprised me most was the crowd. For a band like this I expected there to be moshpits and pushing but instead I found a crowd who seemed to be there just to enjoy the show. And it really was a show – Lizzy and her bandmates treated us to covers of Dio, Fleetwood Mac and Daft Punk. Yep – Daft Punk. One of their encore songs was a surprisingly excellent cover of ‘Get Lucky’. Definitely one to check out on YouTube.

And the show wasn’t all about Lizzy. Her brother, Arejay, treated us to one of the finest drum solos I’ve seen which featured everything from drumming without drumsticks to drumming with drumsticks the size of his arms.

If I had to nitpick, I wasn’t too fond of the lighting – it felt like it didn’t really showcase the energy that was being shown on stage, and I felt like the acoustic pianos moments fell a little bit flat. But apart from that, this was a show that was loud and sexy and cheesey. I’ll definitely be paying more attention to the hard rock genre from now on.

All words by James Lowther and all photos by Melanie Smith. This is James first review for Louder Than War but more of Melanie’s photos can be found at her author’s archive. More photos from this show can be found in the gallery below. Melanie’s website is here: mudkissphotography.co.uk.