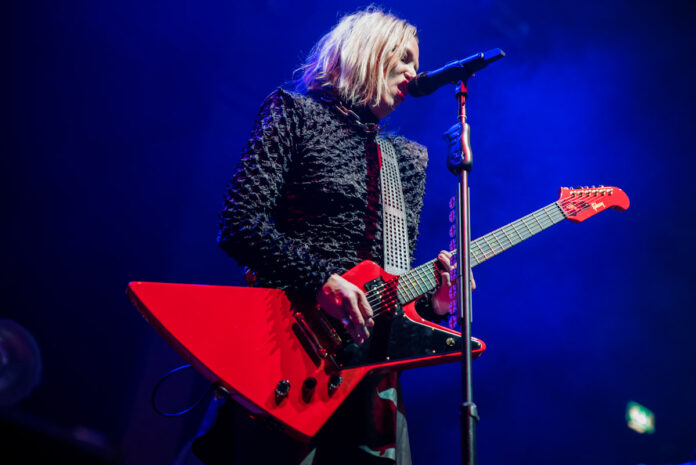 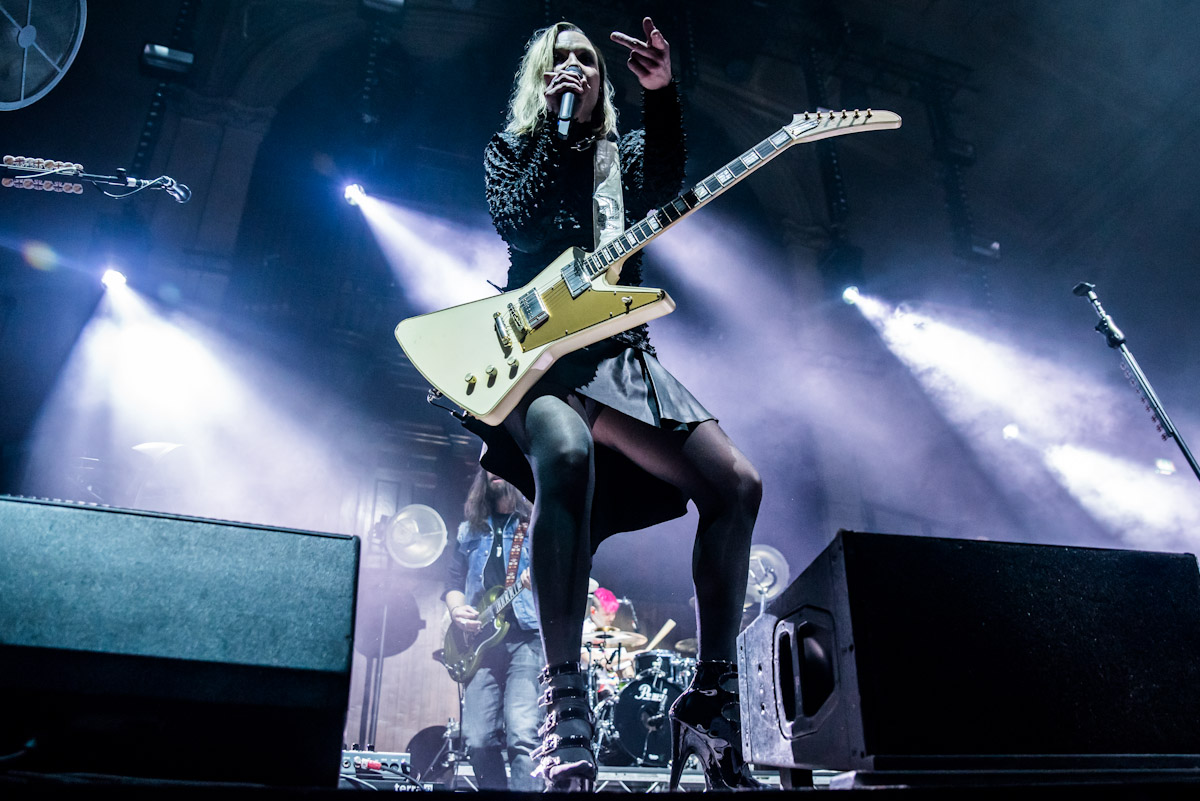 Halestorm return to Manchester for an epic performance to hundreds of doting fans. Lucy Shevchuk reports back, with Micheal Bond taking photos.

Being punctual as ever by setting off well before I should’ve, I walk up Peter Street with a spring in my step. I’m ready for a pint, ready for a dance and most certainly ready to see (from what I’ve been told ) the mighty Halestorm in the flesh. Much to my surprise and horror, I see a mile-long line ahead of me. “These guys have some keen bean fans, right?!” I thought as I walked towards Brewdog, straight past the gargantuan line of eagerly awaiting devotees. A swift pint down and no queuing to be had, I head back towards the entrance to The Albert Hall. I am ready to get my head blown to smithereens.

Unsurprisingly, I’ve been to a lot of gigs. A lot of gigs, in a lot of venues, for a lot of different bands. I have never seen a room this full in all of that time. From front to back, side to side, bottom floor to balcony, every inch of space is taken. A mission thought impossible on entry, I manage to find a spot perfectly fitting for my tiny stature and gain a good view of the stage. Seeing fans in desperation to see from so far back seemed a little bittersweet. The nature of this tour is that the performances should feel more up-close and personal. Unfortunately selling the venue out to full capacity meant a lot of fans were only up-close-and-personal to other people’s heads and armpits. Nevertheless, the mood is excitable and positive. 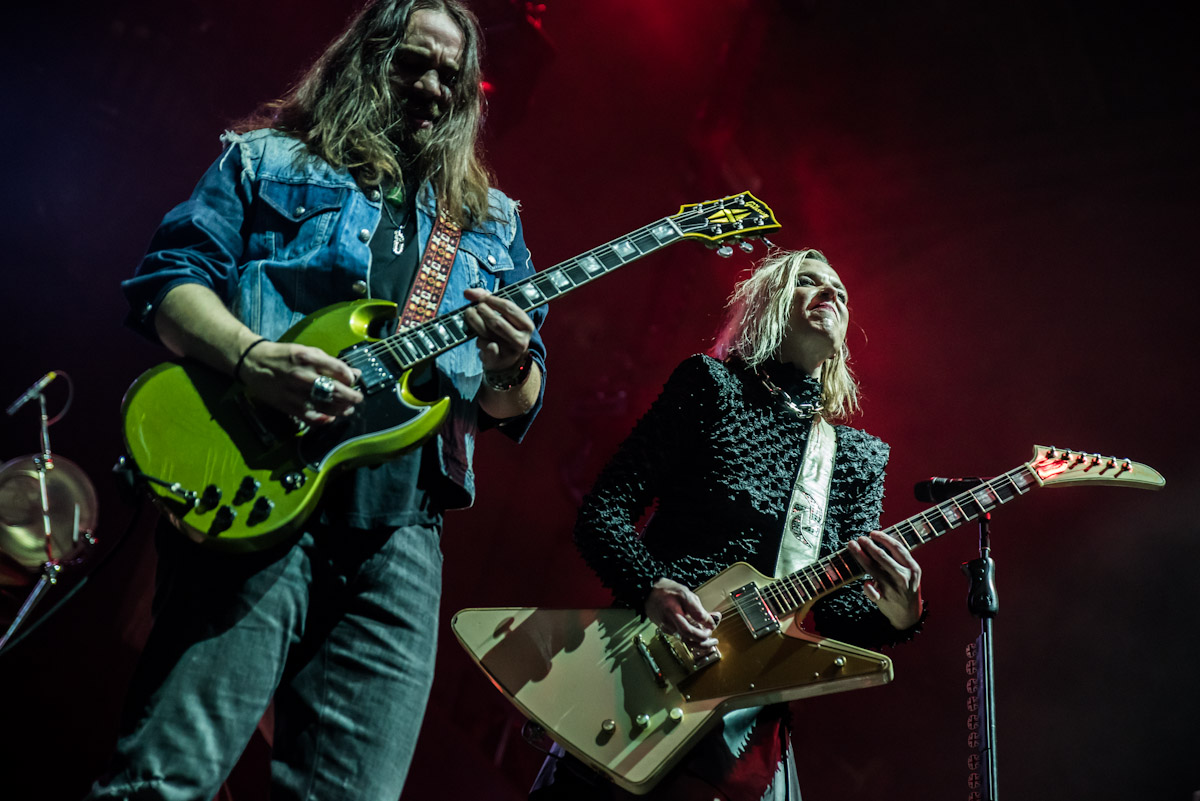 The stage set-up is minimal. Industrial style lights glow purple and neutral as the Halestorm logo floats above. Stripped back and subtle, it matches perfectly with the acoustic section of the evening. Lzzy takes to the stage and opens the evening on a beautiful and emotive version Break-In. A stunning ballad, played solely on piano by Lzzy herself. The crowd quickly joins in and sings along. These guys really know their Halestorm, as the singing struggles to cease from song to song for the rest of the evening. Joined by the rest of the band, they break into a bluesy and almost country/folk style version of Mz.Hyde. The acoustic guitar, played by guitarist Joe Hottinger, perfectly compliments the arrangement with the subtle addition of percussion and bass joining shortly after. Hearing some of Halestorm’s music for the first time in an acoustic fashion, I still notice the broad spectrum of individual talent within the band. The songs alone are catchy, full of sing-a-long style choruses and packed full of attitude. Their widespread appeal is definitely justified and it seems they have considered the audience and fans with every track.

Between tracks, the band seem relaxed and playful. Drummer Arejay Hale (Lzzy’s little brother) proceeds to tell the worst dad jokes I’ve ever heard. By the sounds of the crowd booing, the worst they have heard also. Plenty of jokes, quips, laughing and talking to the audience make for an intimate and inviting experience allowing for personalities to shine. 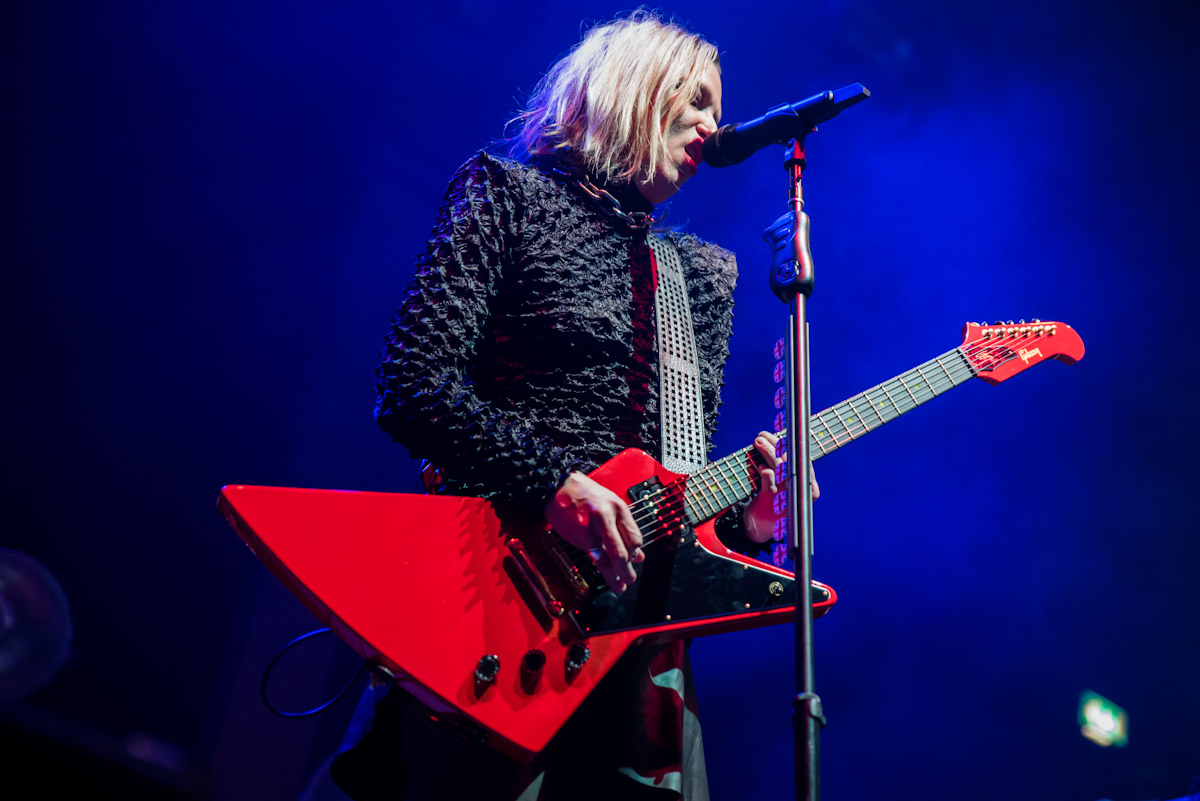 Lzzy’s ability to control and project whilst delivering unrelenting notes is a rare and welcomed find. She delivers her vocals with brute distorted force. Pair that with subtle and nuanced cleans make for a jaw-dropping vocal. The track Heart Of Novocaine further cements my adoration of her voice. The first half of the evening comes to a close, finishing on one hell of an epic ballad The Silence. This further showcased Lzzy’s incredibly and other-worldly vocal ability. Bassist Josh Smith delivers pitch-perfect harmonies throughout, tightly synced to Lzzy’s main vocal.

The venue erupts into cheers and excitement as an explosion of red light floods the room. The band fittingly welcomes the audience back, showing us that they mean business and are ready to blow the roof off. The energy in the room changes as their logo illuminates. The relaxed and almost worship-like congregation sprung to life, the cheers became louder and head-banging became dizzying. Halestorm hold the audience in their hand throughout the performance, in a seemingly effortless way. Hands from the front of the stage to the back of the room lift up into the air for Love Bites (So Do I) with minimal prompt and clap to the beat. 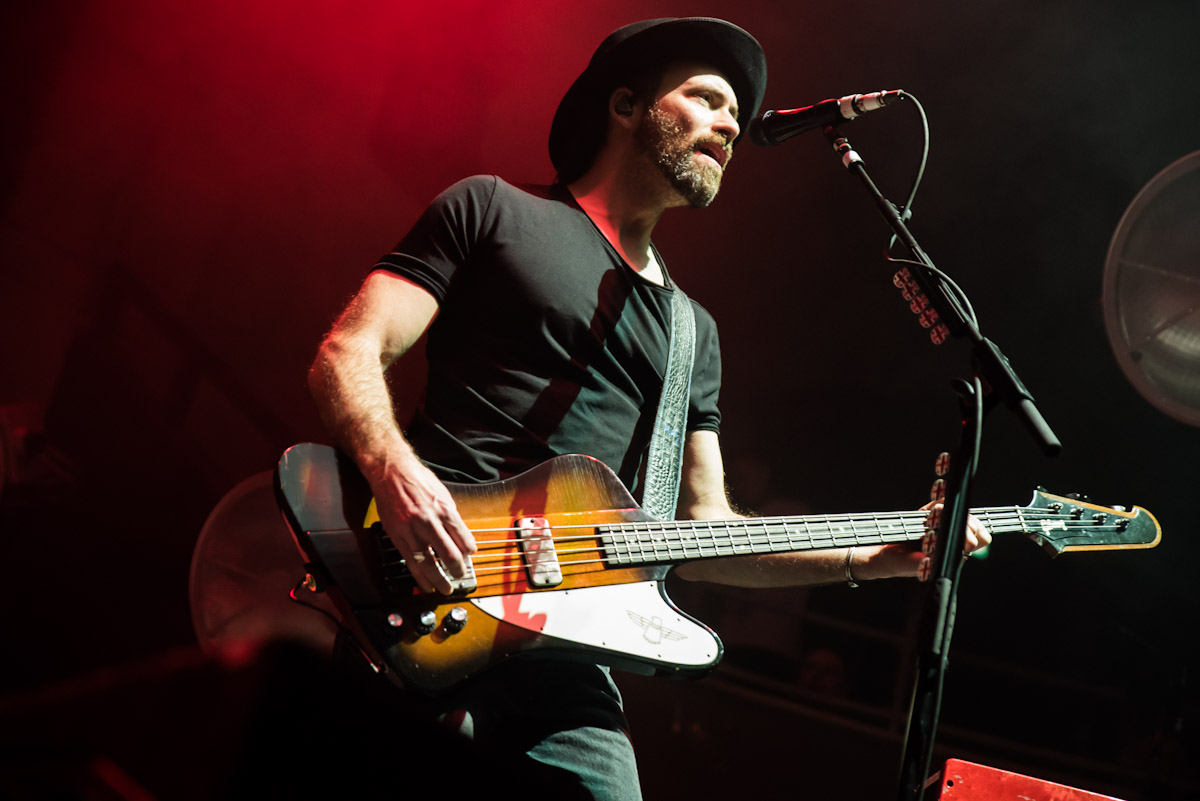 The band continue to play an array of music from different eras of their career. A something-for-everyone approach that shows their development as artists and their ability to maintain quality over the years. They take us back to 2006, their formation in 1997 all the way up to unreleased tracks from their next album Back From The Dead due to be released May 6th 2022. In addition, Lzzy displays some serious multi-tasking ability throughout. Playing screaming lead parts and rhythmic chord progressions all whilst singing with power and agility. Each of the members, however, show immense skill and accuracy throughout.

The audience show no letting up throughout the second half. The start of Amen seems a fan favourite, with Lzzy asking “Can I get an Amen?” and the audience reply ” oohoo!”. The back of the room starts to move, unaffected by their lack of view and dance and sing with one another. Halestorm continues to blast their way through the set whilst drummer Arejay displays some serious stick throwing abilities. It’s a miracle some of them return to Earth considering how high they were going. Serious props to Arejay, that must take some practice.

One final sing-a-long to arguably their most popular track to finish Misery ends the evening with a bang. An Evening With Halestorm is perfect for any kind of Halestorm fan. From long-time die-hard to casual listeners, there really is something for everyone.

Photos by Michael Bond. Any use of any images is illegal.