Last few years its all been doom and gloom on the countries High Street’s – the ression has hit hard, in some area’s the percentage of closed retail outlets currently hovers at 20%.

The music industry has been hit particuarly hard; the number of dedicated retail outlets has shrunken dramatically, none more so than within the independent sector – people just don’t have the money to spend on ‘luxuries’ like records, others choose to use ‘torrent’ sites to obtain the artists work without paying for it, either way the effect on the nations record stores has been dramatic.

As such we are delighted to report that one store is setting to buck this trend.

Hairy Records, the iconic independent Liverpool store is set to re-open next week; the shop was one of the oldest outlets in the country only closing in 2009 when the previous owner passed away. 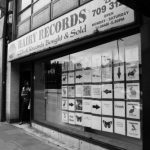 New owner and founder of The Music Consortium, Spike Beecham told the Liverpool Echo: “I was a regular customer at Hairy Records. It was somewhere I’d grown up going to. When we found out that the previous owner had died, we wanted to do everything we could to help.”Â

The shop, now called The Music Consortium’ Vinyl Emporium, has undergone months of renovation work, and is pitching itself as a hub for the city’s creative community – the shop will also include a cafe, and performance area.

Beecham, who cut his teeth working upon the Latitude, Big Chill and Leeds festivals, as well as putting on his own shows around the city, said: “Our aim was to maintain that creative feel where people could come and have access to music… My background is in tour managing and promoting gigs, so I thought about the possibility of having a coffee shop here where people can relax, as well as a live performance space.”Â

The Music Consortium will specialise in old and new vinyl, rock and roll memorabilia, as well as provide tickets for all major music events in Liverpool and further afield. The newly renovated first floor will host a small stage for acoustic performances, as well as providing a seated area for coffee and internet access.

Spike added: “We don’t want people to think of it as just a place for old men and anoraks… We want to welcome everybody in, and make it into a hub for musicians and music fans from across the city.”Â