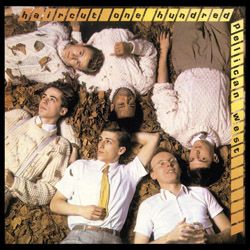 Reissue of the landmark 1982 pop album featuring a bonus disc of extended mixes featuring 2 previously unreleased tracks….Ian Canty looks back on the pop sensation of 1982

I feel like I should appear, like a disgraced politician, in front of the family home with flashing cameras and jostling reporters…..”Yes, yes I admit I do like the recorded works of singer Nick Heyward and yes, yes, the one from Haircut 100….my family and “Louder Than War” are promising to stand by me through these difficult times…no further questions please” …..while my brood and John R stand uncomfortably next to me. But on the other hand, I don’t believe in “guilty pleasures”, you should embrace the things you like rather than feeling ashamed of them. Hence we arrive at this enhanced reissue of “Pelican West”, favourite of 80s discos nationwide…..

I do like Nick Heyward; I like his songs, his attitude to the whole thing and the little, and odd Tenpole Tudor-like quiver in his voice. Even at the time he looked ill at ease with the whole “boy-band” thing. Unlike, say someone like Gary Barlow, perfectly happy to be sat in a mansion counting a mountain of dough whilst thinking he’s one of the world’s top songwriters, Nick seemed to shrug off the “Beatlemania” element that briefly assailed the band during the few months of their successful chart career and strive for something more substantial, which he achieved through his erratic but frequently pleasing solo career. I saw him playing an 80s bill quite a few years back and he still wasn’t playing the game, mock “breaking down” hilariously at the end of “Love Plus One”, much to the displeasure of the assembled “party people” (and yes I did feel a tad out of place myself).

When Haircut 100 appeared in 1981 kitted out in all sorts of chunky knitwear I will confess that they had the potential to be irritating and given the constant radio play ever since by the independent radio stations that pump out “the 80s” non-stop probably still irk a considerable number of people. Coming from a musical family, Nick Heyward’s brother Pete played in Punk band Unorfadox who played the Roxy amongst other new wave venues, but young Nick choose to initially follow a more mod influenced path with his own band, called variously Boat Party but most famously Moving England.

Enlisting Graham Jones from Mod band the Low Numbers and changing the name to Haircut 100, Nick sought to present the project as a fait accompli to the record company (the sleeve designs and artwork as well as the songs being all his own work). The band had since added a jazz funk element to their mix and were not a million miles away from what (the very much more hip) Orange Juice were doing at the same time. Eventually Arista bit and the tremendous success of “Favourite Shirts” put the band firmly in the public eye. This single chimed in with the idea of “New Funk” being trumpeted in the likes of the NME and the Face and for a brief time they could do no wrong (Though Uncle Paul Weller had a bit of a downer on the Haircuts, favouring hip street rap duo Wham! over them).

The next single was an even bigger chart hit. “Love Plus One” I’ve always felt was a little bit spoilt by the cheesy saxophone; it tries that bit too hard. It’s odd seeing how Bob Sargeant who produced the LP handled the use of Saxa in the Beat’s recorded output so well, but I suppose could only work with what was there and they did redeem themselves on this front with the nice brassy trills on the next single “Fantastic Day”. The NME was apoplectic in their review of “Love Plus One” I seem to recall, as it didn’t feature any sort of funky motif or toe the New Funk party line of scene trendies Funkapolitan or Blue Rondo, but to me it is still a pleasing (if over-played during the years since) pop record.

Now on to the album itself. “Pelican West” is an odd thing, not Nick’s best work I would say but certainly the most successful. It’s more or less a straight mix of decent, but pretty lightweight funk workouts, which while ok wouldn’t give Slave a sleepless night and sweet, 60s influenced pop songs. “Surprise Me Again” in that mode is particularly lovely. The term “Sunshine Pop” is mostly usually used with reference to vocal harmony groups of the late sixties, but for me it applies to this album quite well too. There are a few dark hints around (“Is it down to the lake I fear?”), but overall it’s a musical version of candy floss, fluffy, as light as air and pleasing. It no doubt was the soundtrack to a lot of people’s memories during the summer of 1982 and if it’s not what you could call a classic album in the terms of vital songs, it is more a mood captured in the air, suspended. If you lived through it you’re back there whenever you hear it, that kind of thing.

For collectors and avid 80s pop fans the main interest here will be the second CD which gathers together twelve extended versions plus one live track culled the singles giving the listener a full perspective of Nick’s tenure with the band. 12” inch singles were awfully important at the time weren’t they? Shame that most bands didn’t really know quite what to do with them and pointlessly tacked on instrumental passages which did nothing but dilute the song in question. There is an element of this here, but fans will enjoy having the full story and this is a well put together and stylishly designed package.

Overall the career of Haircut 100 was one of brief but massive fame and somewhat unrealised potential; we would have to wait for Nick’s solo career to see what he could really achieve, but what we are presented with on these two discs is a worthwhile effort at telling the whole story of the brightest (in both sense of the world) act in 82 pop.