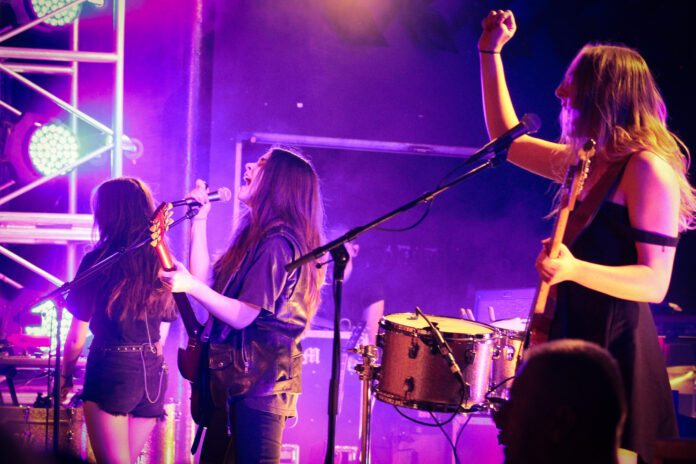 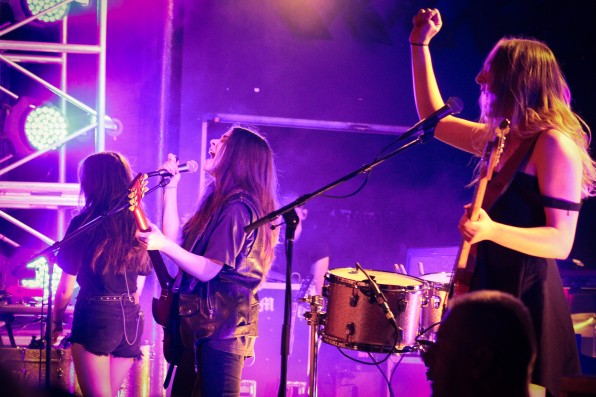 Photo of Haim by Kristen Goodall

Haim are managing to fill a much-needed gap in an otherwise male dominated rock market. Complicated riffs and heavy drums ensure the three sisters from Los Angeles are able to maintain musical credibility for the discerning music fan whilst offering an edgier alternative to Justin Beiber for the teenage girl fan base. The obvious likeness to Fleetwood Mac has been well documented and it’s easy to see why when confronted with three sisterly vocal versions of Stevie Nicks on stage. I like to think of them as a modern day Wilson Phillips, but with more authority, more rock, and far more hair flinging. 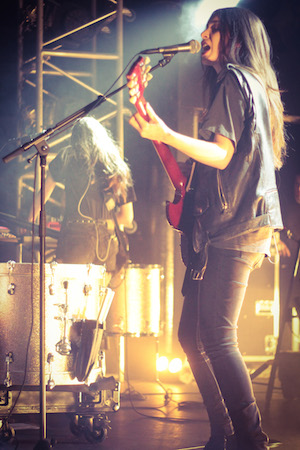 Looking around the sold out venue, packed to the rafters to see the BBC Sound of 2013 winners, the eclectic mix of the audience was apparent. From the teenage girl contingent at the front, chanting ‘Haim Time’ to welcome them on stage to the older, more judicious fans lining the edge of the floor. Its clear Haim are doing what Avril Lavigne could never achieve and they are doing it well.

As the lights dimmed to welcome the girls on stage, down lighters flashed as the strong dominant vocals to the beginning of their 2013 hit ‘Falling ‘were sung by Danielle, with Este on bass and youngest sister Alana on guitar, drums and percussion although at times all three sisters came together to play drums with such ferocity that would have put Bastille to shame. The rock ferocity continued with their rendition of Fleetwood Mac’s ‘Oh Well’ which saw the girls demonstrate their musical prowess and ability, with Danielle storming through guitar solos.A stand out favourite was ‘My Song 5’, sounding nothing like the original album track it had a much more rough industrial sound with strong drum and base influences running throughout.

The initial set saw the trio play recent hit after hit and it’s incredible in such a short period of time on the UK market how Haim have managed to make hits such as ‘If I could Change Your Mind’, ‘Falling’ and ‘Don’t Save Me’ resonate with the audience. The short break before the encore didn’t see the usual inevitable costume change from a girl band, which I admired them for, Haim are there to kick some musical ass, not for eye candy.

The encore opened with a cover of Beyoncé’s XO with Este taking lead vocals and Danielle moving to play lead drums, before moving on to their latest hit ‘The Wire’ before culminating in the perfect final song ‘Let Me Go’ that has ethereal vocals and powerful, dominant drum beats, as the crescendo reached its peak so did the audience and I was left with two thoughts, firstly I was a converted Haim fan and the secondly the realisation that they are so much rockier and cooler than I will ever be.

Check out more photos from the show below:

All photos © Kristen Goodall. More words and photos by Kristen on Louder Than War can be found at her author’s archive.