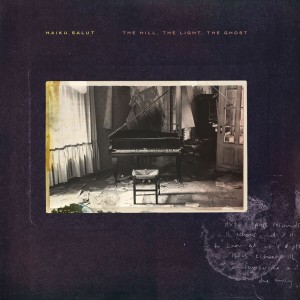 Haiku Salut: The Hill, The Light, The Ghost

Fifth album from the acclaimed Derbyshire trio Haiku Salut finds them tapping into field recordings and the echoes of lives once lived. Simon Tucker reviews.

Haiku Salut are a constantly shifting presence. Their music floats between the intense to the serene and each album finds the band exploring different approaches and themes to their work. Their fourth album was a re-imagined score for the Buster Keaton classic The General but for their fifth record they have decided to engage with the world around them utilising field recordings and the concept of memory and the echoes left behind by people no longer living. Receiving a Tascam field recorder Haiku Salut’s Sophie Barkerwood started carrying it around with her everywhere “in case anything interesting happened”. The band then began “actively searching for ghosts in the world and framing the songs around their qualities. Gathering recordings, removing them from their context and building worlds around them. Capturing and preserving personal experiences, and evoking vivid spaces. You could say the record is a miniature exploration of sound in relation to memory. Each piece is intimately connected to a place in time.”

It is the sensation of connection that permeates throughout The Hill, The Light, The Ghost with each piece folding beautifully into the next one creating a narrative that feels like the life cycle itself. The album blooms with opener Wide Awake which uses bird song and a gentle pace to help you get settled in before Entering then takes you by the hand and starts leading the way with instrumentation looping and layers being added in a fashion not unlike a Terry Riley composition. As we continue with songs We Need These Beams and I Dreamed I was Awake For A Very Long Time (which has a great Four Tet-like glitch to it) you realise that the band have pulled off that most wonderful of balancing acts where not one element overpowers the others. Field recordings are embedded in to the very heart of the pieces themselves which helps bring this album away from the more avant-garde and into a place where fearless exploration, a willingness to experiment and an innate gift for melody combine into a gorgeous whole.

The Hill, The Light, The Ghost is also a work that is unafraid to put some unease into the mix even when it is surrounded by beauty like All Watched Over By Machines Of Loving Grace which manages to sound creepy, gorgeous and intoxicating all at the same time. Then there’s Trespass which fully immerses you within the walls of a rotting house where it is just you, the piano, the unaware children playing outside and the ghost sat next to you on the stool.

This is in album full of intricate detail, confidence and a truly gorgeous sense of melancholy. The Hill, The Light, The Ghost shows a band really confident in their skills as artists and storytellers. It is a work that manages to feel familiar, old yet futuristic all at the same time and is an album that this writer will be returning a lot to as summer waves goodbye and autumn starts to natures colour scheme.