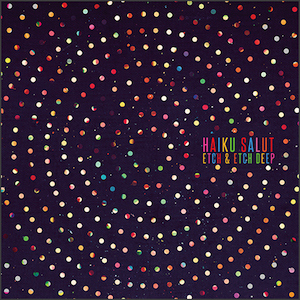 Derbyshire trio Haiku Salut return with a second album delving deeper into instrumental electro-pop.  Features Editor Sarah Lay reviews what sounds likely to be one of our favourite albums of the year.

There is a modest, unassuming nature about the tones of Haiku Salut that at once make their albums familiar and surprising. Mostly unencumbered by the distraction of voice, the instrumental electro-pop (‘Baroque-pop-folktronic-neo-classical-something-or-other’ if you’re looking to corner them) sounds are sinuous and organic in feel, shimmering on the periphery as the friendliest ghost in the machine.

Opening with Bleak and Beautiful (All Things) we are showered in synthetic rain. There is the sense of walking through this electronic mizzle falling and of pixels fuzzing and blinking all across your view, before being delivered into a fairground of bright sonics, blurring as a carousel turns and turns faster. The squidgy stretch and squeeze expands out in the spaces of You Dance A Particular Algorithm, between clipped beats and an instinctive urge to pull repeating shapes as you retreat into the glowing rave conjured around you by the layers of sound, the bolts of percussion as punctuation.

Hearts not Pearts is softened by vocal harmonies, a rare use of voice that despite the gentle tones stands stark simply because of the human noise amongst the beauty of so many machines. That this gives way to the deep Acid squelch of Divided By Surfaces and Silence is the sort of wonderful contrast, at once surprising and delightful, that this album is built from.

There is a pause for breath with Doing Better and then the increasingly intense and paranoid build of Things Were Happening and They Were Strange. The beats trip over and around themselves as a shadow falls across the track, a foreboding undertone creeping into your conscious as the track plays on.

It’s nicely juxtaposed with the calming babble of Becauselessness; a purring hardly-there melody, as if all nature were powered by clockwork. Those mechanics become too tightly wound on Skip to the End, a military beat bearing down on a weaving accordion beat, those electronic raindrops seeping in, a cold that stills the racing heart. And that sensation flows through to The No-Colour of Rain and Dust, with a whuh-whuh-whuh underneath the twinkle of keys it is a dampened body but a lifted spirit. While closer Foreign Pollen delivers us back into the electronic mizzle, the flash of pixels in our periphery again as it slowly climbs, freeing us from gravity and letting us fall , controlled delivery creating a a delirious spin of sound.

Where debut Tricolor was a rainbow shooting, bubble popping arcade of smiling sounds Etch and Etch Deep is a darker, deeper delve into instrumental electro-pop.

It’s no less joyful a record than the trio’s first but is more delicately balanced between whimsical lightness and intricate shade, becoming a complex listen that reveals new delights with each repeat play.

All words by Sarah Lay. You can find her on Twitter or read more from her on Louder Than War here.