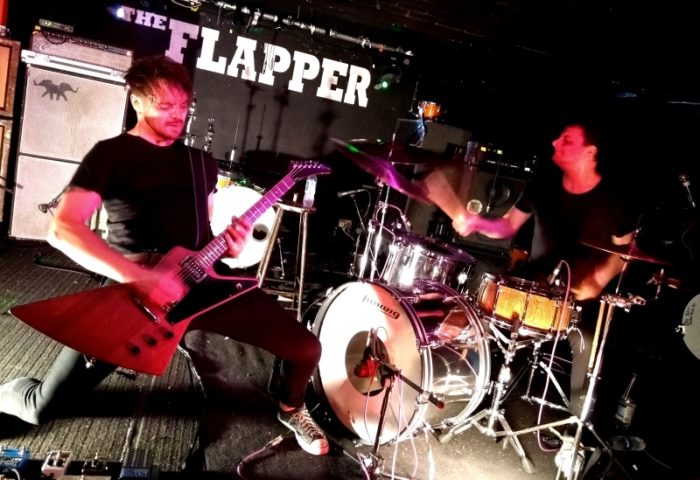 Earache Record’s Nottingham signings Haggard Cat bring their brand of blues-rock noise to a venue under threat. Louder Than War’s Christopher Lloyd was there to report.

Around a year ago the legendary Earache records released the debut Haggard Cat album Challenger, a raw and furious combination of blues-rock finery from band members that has garnered universal love both critically and with the rock-loving public. The touring schedule has been full on and as the Challenger tour cycle comes to an end Haggard Cat bring their noise to the Little Cavalier festival at the Flapper and Firkin, which is sadly yet another brilliant live venue under threat of closure, to be replaced by yet more unaffordable flats.

The set kicks off with a new track, First Words, a slow-burning monster that gives drummer Tom Marsh the chance to slowly, yet aggressively ease into the alarmingly full-on half hour set. American Graffiti follows, and from here on in the gig ceases to let up for one solitary minute. Frontman Matt Reynolds menacingly screams his way through the verses before the magnificent chorus finally arrives bringing with it sweet release: the brief poppy sing along nature of the chorus is practically spoon-fed to a visibly ravenous room, all served up with ear-piercing guitar.

Alligator Tightrope, the only track from their self-released Charger album, follows and it’s a clear template for the sound perfected on Challenger, which the rest of the set exclusively draws from. Grave Digger rumbles away menacingly whilst the singles Bone Shaker and Bad News Travels Fast get played with much more aggression than heard on the record. It’s at this point that certain sections of the audience find it the appropriate time to react equally as aggressively and start slam dancing, hitting their stride along with everybody in their path.

The rapport between Matt and Tom is palpable and the playing is immense – Haggard Cat are unquestionably one of those rare bands that, whilst great on record, is at the peak of its powers when up on the stage.

The short powerhouse of a set comes crashing to a close with their first single and finest moment to date, The Patriot. Clearly the crowd favourite of the night, it’s a two-part monster of a track which begins furiously and takes it to the the nth degree as the second section of the song kicks in with it’s sheer abrasive riffage and manic drumming. The result is a startling mass of energy and noise that threatens to lay waste to the venue before the new flat developers even get a look in.

These venues are made for bands like Haggard Cat, and it’s only going to get harder to see fantastic bands play such awesome sets if there’s nowhere for them actually play. Haggard Cat will undoubtedly playing plenty more gigs in these kind of venues up and down the land for as long as they’re not turned into Starbucks. These venues need your support, these bands need your ears, and you ABSOLUTELY need music of the kind so brilliantly played tonight in your lives.

There’s a petition to try and stop the demolition of The Flapper that can be signed here.

More writing by Christopher can be found at his authors archive.