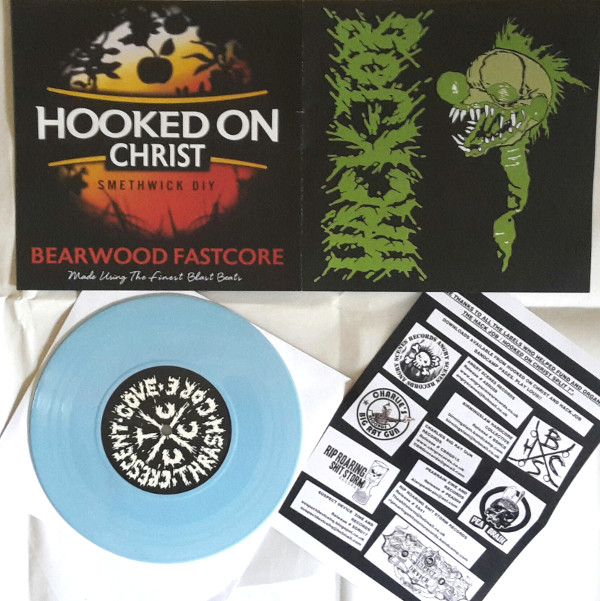 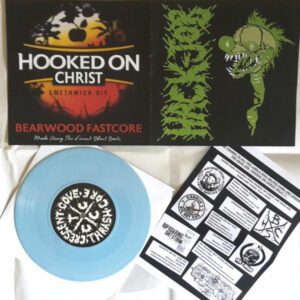 This little bundle of noise grabs your attention with the visuals before you even play it. Hackjob’s side has a mutant killer clown in vivid red and green against a black background, while Hooked On Christ have swigged back and vomited up their own take on the label of brummie cider Crumpton Oaks.

When I slapped down the brightly coloured vinyl and Hooked on Christ came blaring out of the speakers my instant reaction was “This don’t half sound like Active Minds“. The vocals are more grind influenced, with that gruff, aaarrgghh thing going on but the guitar and drumming style are not far off. So, if this was one of those brief reviews that you get in zines like Artcore or Maximum RocknRoll I’d just refer to them as Active Grinds. Upon opening the 7 inch insert my deduction proved correct as, like Active Minds, Hooked on Christ consist of 2 people playing guitar, drums and no bass.

They share vocals and play fast hardcore (officially billed as fastcore) breaking down into occasional tuneful parts, but as mentioned, there is a grind influence. I don’t know if I’m just imagining it, but I’d say there is a vocal influence from Dave Trenga of Behind Enemy Lines who have a song called…..”Hooked on Christ”. Coincidence? I think not. The maximum you can get away with fitting on one side of a 7 inch is – so I am led to believe – about 6 minutes. Hooked On Christ go all the way to 6 minutes 30 seconds, squeezing in 12 songs. It’s all about Value For Money, kids! Lyrically their subject matter ranges from tea and hot sauce to singing about being in a band and more socio-political themes. Defiant pose with a cheeky grin.

Hackjob are well known to me already. I’ve enjoyed watching them many times and they are good mates. A trio with a wide range of musical interests but a common interest in grindcore and pushing musical boundaries – if it’s stupidly fast, laughably short or lyrically ridiculous then they will do it. After a recent performance a mate who had taken video of the gig absolutely loved the fact that the introduction explaining the song was longer than the track itself. With 5 tracks clocking in at 4 and a half minutes, Hackjob start off with a stompy rumble, string scratching a la Dead Kennedys, samples from the Killer Klowns from Outer Space film building the tension before they kick off. A bit like a kids toy that you have to pull back to wind the spring before you let it go and it zooms across the floor. The combination of screechy and gruff vocals keeps you on your toes.

You’ve stumbled into a bad dream where Cookie Monster is fucking angry and there is a baby crow wanting to be fed. There are blast beats aplenty and something demonic lurking. Pounding riffs and fast hardcore drumming will please fans of Citizens Arrest, Siege and Nasum. They also have something of lates 80s UK thrash bands about them, complete with 2 songs clocking in at about 6 seconds. One of these two is their stroke of absolute genius: “Porngrind go fuck yourself” (that’s the title, the lyrics are an epic 9 words long). Not being too bothered about grindcore I did not realise there was a whole offshoot sub-genre devoted to mysogynistic porn lyrics. Sounds like a bunch of losers who should stay put in their smelly bedrooms. I love Hackjob for taking these idiots to task.

The final track “That’s not distortion that’s tinnitus” is in the fine punk tradition of Disorder (Distortion Til Deafness) and is semi-autobiographical. It also ends their side with a locked groove – I told you they liked messing about. They also have a serious side, with Corporate Pickpockets observing the propagation of poverty and ill health to create greater profits for large corporations.

So all in all you get 17 songs in 11 minutes with lots of urrgs, arrghhs, shouting, manic drumming and chuggy guitars.  If that’s your thing this record is for you.

This really is a collaboration and a half between 2 bands and 6 labels (Angry Scenes Records, Birmingslam Hardcore Collective, Charlies Big Ray Gun Records, Pea Brain Zine and Records, Rip Roaring Shit Storm Records and Suspect Device Zine and Records) and an example of what is good about the DIY punk scene.

Hack job can be contacted at hackjobband@outlook.com or found on Facebook, as can Hooked on Christ.

Review by Nathan Brown.  You can read more of his blah blah blah here.