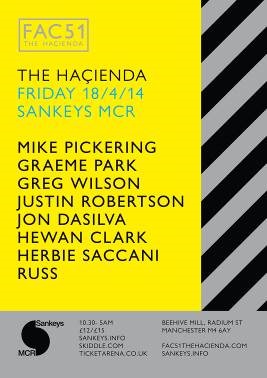 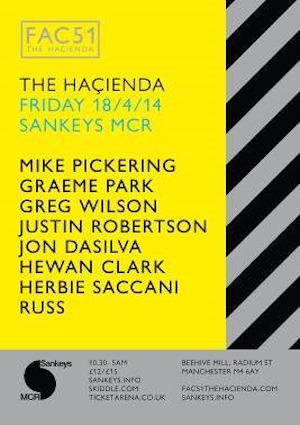 Following the sold out Albert Hall New Years Eve spectacular, FAC 51 The Hacienda’s first Manchester event of 2014 sees the club back at Sankeys on Easter Good Friday 18th April for a special event that teams up many of the legendary DJ’s that shaped the original club for a an exceptional night.

The duo who shaped the Hacienda beginning to end, Graeme Park and Mike Pickering resume their partnership, playing both individually and sharing the decks back to back as they trade their finest records of then and now together.

Throwing back to the opening days of the club, “The Big H” Hewan Clarke returns to The Hacienda for a special set of early Eighties cuts whilst the DJing legend that is Greg Wilson, resident from 1983 to 1984 also brings his sublime selection of remixes and edits to the event, with both looking to highlight the musical history of the Hacienda in their sets.

Acid house and Balearic supremos, Jon Dasilva and Justin Robertson, who shaped the independent, open minded, soundtrack to the Hacienda and Manchester in the last Eighties and early Nineties with Hot, Most Excellent, Spacefunk and more, also drop by to provide their great tunes selection and upfront choices to the event.

Finishing up the extensive bill, Manchester Underground’s Russ rocks up with his vinyl while Herbie Saccani delivers one of his much praised warm up sets to kickstart what is set to be another great event for FAC 51 in its Manchester hometown.