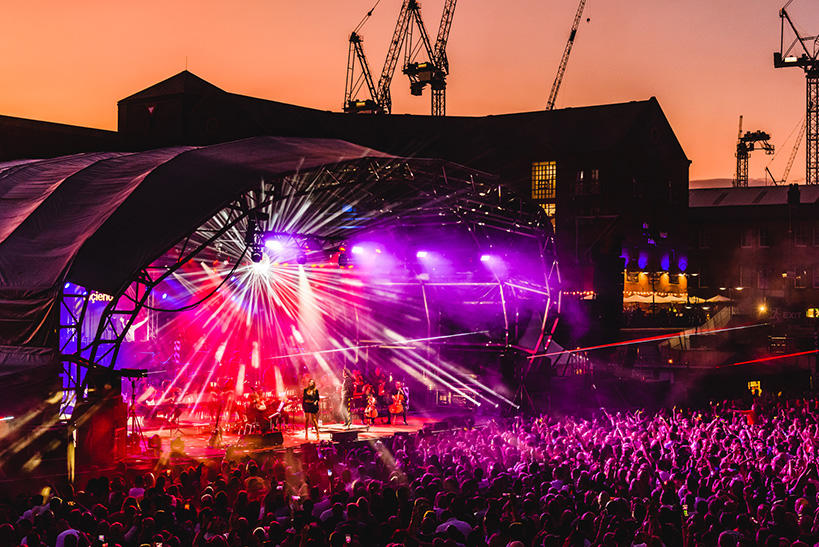 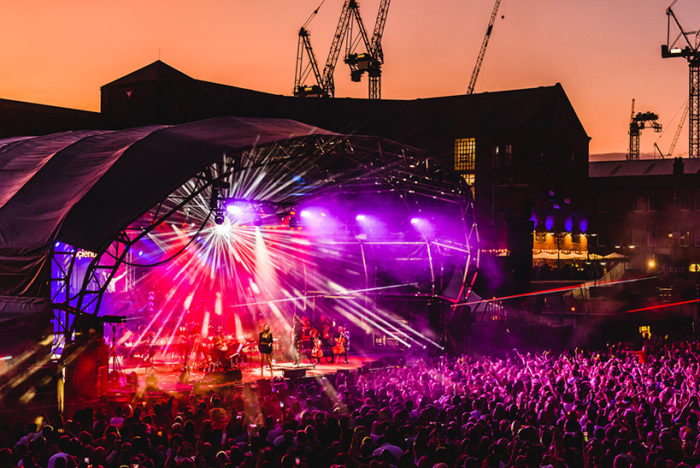 Benjamin Cassidy spent an evening soaking up the atmosphere and nostalgia of the halcyon days of ultimate 90s club, the much missed Hacienda

Rain. Manchester’s infamous for it. That doesn’t stop anyone having fun at an outdoor gig there though; but it’s good when the sunshine shows up for one. Hours before the Hacienda Classical, a unique collaborative outfit (see our interview here, as Peter Hook discusses its birth and evolution) there were DJs, dancers and everything else you’d expect from anything associated with the Hacienda name. Of course, none of it means a thing without the people to enjoy it. Tony Wilson and Rob Gretton, the owners/custodians of the infamous powerhouse knew that only too well. This day was all about celebrating that, by continuing the spirit.

Castlefield Bowl Arena – not far from the original site of The Hacienda, by the canal. A mixture of old and new fans descended, with the gig having sold out well in advance. Anoraks, fishing hats and 90s kit a plenty. It was clear there were lots of survivors from the original scene, who no doubt spent an animated evening (that stretched into the early hours) in the old Manchester institution. It really did change things for dance music, and is a huge part of the cultural history of modern music.

All day the excitement built, with everyone in the mood to party. The organisation was good, which helped. Almost 8,000 people in quite a small area requires some planning. There were bars and food stalls too. Of course, the bars were much busier than the food stalls, but it was still great to have them, for those who needed to soak up a few pints (in preparation for more). It was a sort of carnival atmosphere, with everyone on the same page. It was great that an opportunity to get this many people in one place for this reason wasn’t squandered. It meant that people got their money’s worth, as well as loads of time to get their best dance moves perfected. They’d need them in a few hours.

Herbie Saccani got things going, reminding everyone why they were there. They didn’t need it, but appreciated it anyway, giving a plentiful supply of appreciation by way of dancing, jumping and rocking to the electric atmosphere. The gates were opened, no going back.

Hooky. Yeah, Peter Hook himself. Legend doesn’t quite cut it to anyone who knows even the tiniest amount of Manchester’s music history. Every bit the people’s person, he was in fine form, as he was welcomed on stage by thunderous roars. He was on hand to give a DJ set, that went down incredibly, building more and more tension to the main event. Before that though, there were a few more acts to go. It would be a travesty to call them warm ups, as they were hotter than rocket fuel; they were the countdown to the rocket taking off.

Inner City, there to play for the first time in Manchester for 25 years. it’s hard to know who was more excited by that, the crowd or them. Ultimately that was answered as the first few bars of Good Life played out, and things went up a further notch. They absolutely nailed it and were followed by Mark XTC, who was the final support act. By now it was an absolute cauldron of the best sort of mayhem – fun, frolics and festivities. Glow sticks, fishing hats, sports brand anoraks, and smiles everywhere you looked. 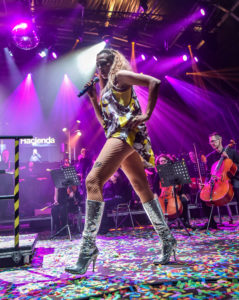 It was time for the main event. A few minutes after 9pm the musicians made their way to the stage. It was a funny feeling watching an orchestra assemble, with DJs (Graeme Park, notably) already on stage. Not your usual set-up. There was nothing usual or ordinary about any of it though. Ambitious would describe it well. That had always been the word which summed up the entire enterprise of The Hacienda too: bold, and determined. Give the people what they want, what they need. As things kicked off on stage, the signs that this is exactly what the doctor added were all there. Whoops, screams and people arm in hugging. Not just couples – friends and also strangers, all ecstatic to be sharing such a moment as this, to the encouragement of MC Tunes, dressed to the nines in smart grey keks and a matching waistcoat.

Tim Crookes, who headed up the Camerata Orchestra, got things going, swishing his conductor’s baton. If it was alive before, now it was a pumping heart in the middle of Manchester. That kind of atmosphere can’t be bought or bottled. They got through the first few numbers before pulling out one of the big guns. Rhythm is a Dancer coursed out, only with those twiddly bits on the record’s intro so instantly recognisable played on violins now. A perfect marriage of audio delight. Everyone joined in, feeling drawn to that thing which can never be fully explained but doesn’t have to be – that unity only music brings, the tangible sense of joy as masses of people all take part in a collective moment. The same magical spell that plucking a tuned string on a guitar casts. Not something, but everything, seemingly from nothing but thin air. In short, everything that The Hacienda was best known for and did first, paving the way for so many others to follow.

Now it was in full swing, it was hard to move anywhere in the crowd. That wasn’t an issue though, as nobody wanted to. They were just grateful to be right there, in the audience, witnessing history in more ways than one. The tone of the whole thing was freedom, an antidote to the mundane and humdrum. For that short time, the music takes you away from everything that might not be what you want it to be. If an opposite of anaesthetic exists, this was surely it. In that sense the day was a liberation for the mind too; the body looked after itself, as the pulsing bass beats of the wonderfully loud sound system rippled through, jolting you, daring you to dance. It was sensational. Seismic.

Classic after classic played out. No matter how familiar anyone is, there’s still that moment when a song starts you’ve half-forgotten about. With so much material to choose from, nobody would have envied the job of having to narrow it down. Aptly, Last Night A DJ Saved My Life was one of those for many – faces lit up as it came on. Right in there with dance was an injection of funk, showcasing how innovative and experimental this project really is. A reminder of what music has the power to do: combine, unite and blend differences into an eclectic fusion of one coherent sound. Amongst other activity on the night, two things stuck out: this crowd weren’t tiring, and could go at it all night – they had their dancing shoes well and truly on and weren’t scared to use them, either; secondly, age wasn’t a concern. A good chunk of the revellers was likely there first time around, old enough to have been regulars at The Hacienda. This lot would need putting down before they sat down, and could hold their own with anyone brave or stupid enough to label them old.

With an obligatory encore demanded by an adoring crowd, the night came to an end with You’re Free, that really summed everything up. Vibrancy, the importance of expression and most of all the will to uphold the spirit of a time and prove that even time, space or anything else can’t prevent an idea from surviving. The building might be gone, the music scene a very different one today, but tonight none of that mattered. All that did was having a whopping good time of it. That spark and how the ground trembled with the tremendous thrill of it all was enough to reach Tony Wilson and Rob Gretton, wherever they may be. The Hacienda was never really just a place, it was a people. Tonight’s antics proved that.

Going forward, to top this extravaganza of a concert, the next Manchester night promises to be even bigger, better and bolder. The way only the Hacienda could be. Tickets are now available for October’s Mayfield depot gig. It’s not to be missed, and will be something truly special. 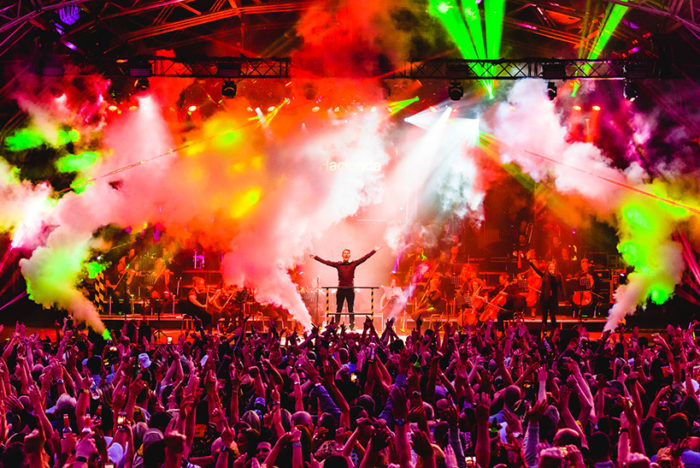 All words by Benjamin Francis Cassidy. To read more of his work for Louder Than War, visit his Author Profile. You can find Benjamin on Facebook, as well as emailing him.

Photos thanks to Anthony Mooney and Dominic Simpson