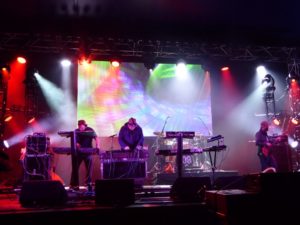 FAC 51 The Hacienda’s aftershow for the fully sold out return to Castlefield with Hacienda Classical sees it back at Manchester’s Albert Hall following the concert with 808 State and joined by DJ’s Marshall Jefferson, Graeme Park, Mike Pickering and Herbie Saccani

Manchester’s seminal techno pioneers 808 State headline with their first live show of the year in their home city and expect classic tunes such as Pacific State, Cubik and In Yer Face mixed into the set along with plenty of other 808 material  spanning their now near three decade career

Highlighting their long association with The Hac, 808 mainstay Graham Massey admits that Pacific State was recorded entirely for the Haçienda dance floor.  “With Pacific, it was immensely special to me to get the last record at The Haçienda. Having the last record meant far more to us than having a Number One. To us, that was Number One and if you didn’t get it on at the Haçienda it was a disaster.”

808 are joined by Marshall Jefferson, one of the main influences on the development of Chicago House. In crafting classics like Move Your Body, Traxx Releases such as Open Our Eyes and performing on Ce Ce Roger’s seminal Someday, Marshall has is widely respected for his role in the history of dance