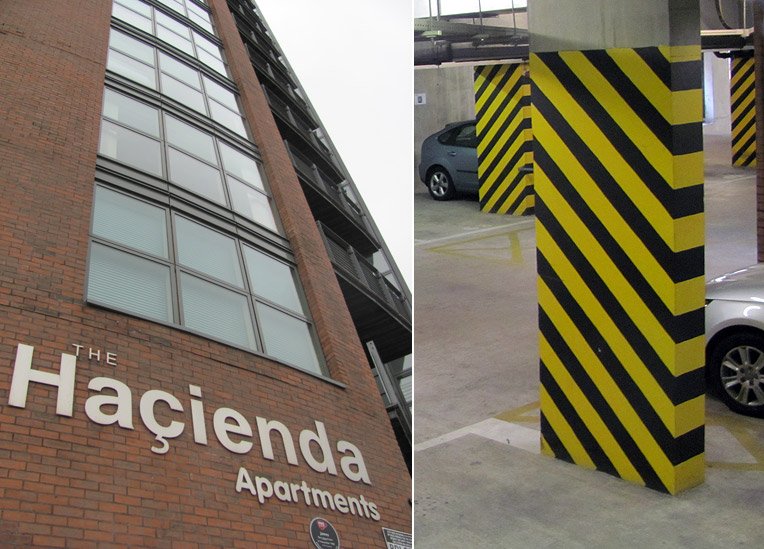 Can it really be thirty years since the Hacienda was gifted onto Manchester amongst much wonderment and much piss taking?

Nowadays, when every bar and club in town apes it’s revolutionary Ben Kelly steel and chrome design and every city centre flat is a direct descendent of its visionary layout, it’s hard to remember just how mind altering the place was.

The idea of building a huge super club that was open seven days a week and was committed to all of the arts from live music to club nights, from post punk to electro from film to spoken word was outrageous at the time and the city was privately appreciative of New Order bankrupting themselves to create the venture whilst publicly sneering and laughing at the place at the same time making sure you got on the guest list- how much more northern can you get…feeding the hand that bites and all that!


The Hacienda has long gone. Demolished in the rush to construct the new Manchester that it heralded. King Tony was happy with this but oddly we miss the old place and at tonight’s party, where the spirit of the club has been revoked more than the layout, it feels like what was once far out and modern is almost quaint and museum like as it reserects itself for one night only in the car park beneath the posh city centre flats like an old band battering out the long lost hits for one more time.

The idea of partyis a stroke of genius.

The cavernous concrete of the car park really suits the post industrial Factory vibe of the Hass and the booming acoustics have been finally been put into their place by the best PA that has ever battered my ears into submission. The soundtrack is Hacienda dance classic with the odd curveball like the Stooges I  Wanna Be Your Dog which sounds even more genius in this context.

There are a great line up of DKs from Hewan Clarke, the original resident DJ of the club who really did pioneer house music instead of the long queue of pretenders who make the claim like gold prospectors squabbling of a some kind of yellow stain in the water soaked rock. Clarke is an affable legend and, perhaps too affable to stake the claim and it’s time his story is told ( and it will be on this site soon). Greg Wilson is also here playing the electro set that he pioneered at Legends before briefly moving to the Hass years ago. Greg is a key influence on the Manchester scene and those that know talk in glowing terms of his early eighties DJ sets that introduced the new electronic form of music into the Manchester mix.

Hacienda classics are played by Dave Haslam and Jon Da Silva whilst the genial Graeme Park is about to explode with excitement having missed the last night of the of Hacienda, he tells us that finally he gets to play the final last night of the legendary club and is the last man bringing down the final curtain on the club with last record of the evening at and untimely midnight.


It’s a final curtain that we feel should be lifted as an annual event because this was a great night out. A mixture of old faces and youthful hipsters wandered in and out of the booming decibels, many looking pleased to still be alive after the crazed years of the late eighties when pills and powders drove a wild bacchanalian party into the heavens and the soundtrack was plinky house music.

Mark E Smith is even here, along with many others who were not regulars at the old club paying respects andtaking thepiss in time honoured fashion. He is suitably scowling and says something to the TV camera, behind him the photo of Tony Wilson smirks with his high IQ eyes surveying the scene. We wonder if he would have hated this nostalgia or would he have finally relented to the idea that sometimes pop culture has to be , well, fun.

Tony’s picture is one of a rogues gallery of dead men who made Manchester as he hangs their beautific along with Martin Hannett who famously fell out with the Factory crew because they built the club instead of a sci fi studio for his brilliant creations and Ian Curtis, whose rising star made everything possible and Rob Gretton the New Order manager who was the original DJ in town and the hooligan with a heart of gold and the template for the gruff Manc who doesn’t really mean it, a role currently occupied by Peter Hook who is the host tonight.

There’s lots of old faces here tonight, Dorian Grey’s in reverse with their Hacienda picture in the attic. Plenty of catching up in the ramps leading down to the car park and a surprisingly large amount of talk of the future.

The Hacienda party is a celebration of the years at the club when everything was possible and people danced non stop for hours, decades later they still dance- arms  raised to the heavens in eternal hope. If god was a tablet he would saved the world by now or for a few short wild hours and there is much retro gurning and strange spiral flecked talk from gnarled loons who should know better but can’t resist one more trip into the wonderland of the time when pop culture meant everything and the late night city streets were full of freaks instead of designer bars. Many of them have not come down from the first time, a time when the chemicals introduced revolutionary concepts like blokes being able to hug eachother without fear of questioning their sexuality. If, before punk the world seemed monochrome, before the Hacienda and E it seemed Victorian, per Haceinda was James Anderton world after it was a bit nicer. Maybe we come to celebrate that tonight.

Opinion is split whether tonight was a good idea or not. It always is in Manchester, a city were a good grumpy row is as good night out. Being grouty never did anyone any good and sometimes it’s great to celebrate what we once had. For me it would have been cool to have a smaller room celebrating the much overlooked Haceinda early years of wild gigs by the Birthday Party and Einsterzende Neubaten- that would be a death disco that would be really wild!

The night is a huge success, the concrete car park is perfect for a 21st century Hacienda and a glimpse into what could have been if the club had survived. A city centre space and. A truly modern idea that changed the way the whole city looked, a nightclub for the art set that became a people’s palace, a world famous club which hosted some of the greatest rock n roll shows I’ve ever seen and a symbol of a city’s ability to party away the blues the Hacienda and its 30th birthday party was ultimately a triumph.