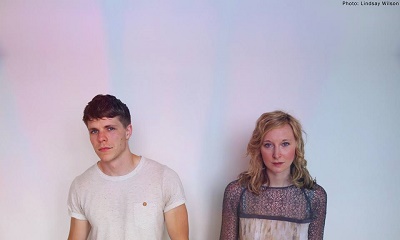 There was once a time when the Mancunian music scene was dominated wholeheartedly by testosterone fuelled lads trying their damnedest to become the next Oasis. Of course, scratching beneath the surface revealed a wealth of artists doing things a little differently but for the most part, middle of the road indie was par for the course. Fortunately it seems the tide has changed and the musical milieu of Manchester is no longer underpinned by bad attitudes and questionable hairstyles, in fact, it seems bands have taken the onus upon themselves to keep their scene from stagnating and as a result Manchester is once again a hotbed for exciting emerging talent.

One such band are Gymnast, an electronically driven duo whose debut album has already started turning heads thanks to their atypical marketing strategy. Indeed, rather than stream the album in its entirety, the band opted instead to preview a track each Friday in the run up to the album’s release, allowing for the record to seep insidiously in to the collective consciousness of those in the know.

Much like their contemporaries Acre Tarn, who incidentally also release their debut this month, Wild Fleet is record built around subtlety and spacial awareness – this isn’t a record that immediately grabs listeners by force, instead it seduces them; a little bared thigh here, a coy smile there, each play through revealing further nuances that spellbind listeners and implore them to keep listening. Tracks such as ‘Geneva’ burn slowly, and in doing so encapsulate and epitomise Gymnast entirely. Bass-heavy trip-hop beats backbone the record, whilst refined and atypical instrumentation really fleshes it out.

Ambience might well be the name of Gymnast’s game, but vocalist Cathy Wilcock does her utmost to bring a more tangible level of introspection to the record, and does so fantastically as the duo’s sultry mouthpiece. As such Wild Fleet is an album that both beguiles and resonates, and can take its place as either background ambience or enchanting centrepiece depending on the listener’s mood, and whilst the pay-off isn’t immediate, those who throw themselves in to the album will find a record, and a band, with ambition, finesse and perhaps most imperatively, a solid understanding of what it takes to make a record that’s worth going back to.