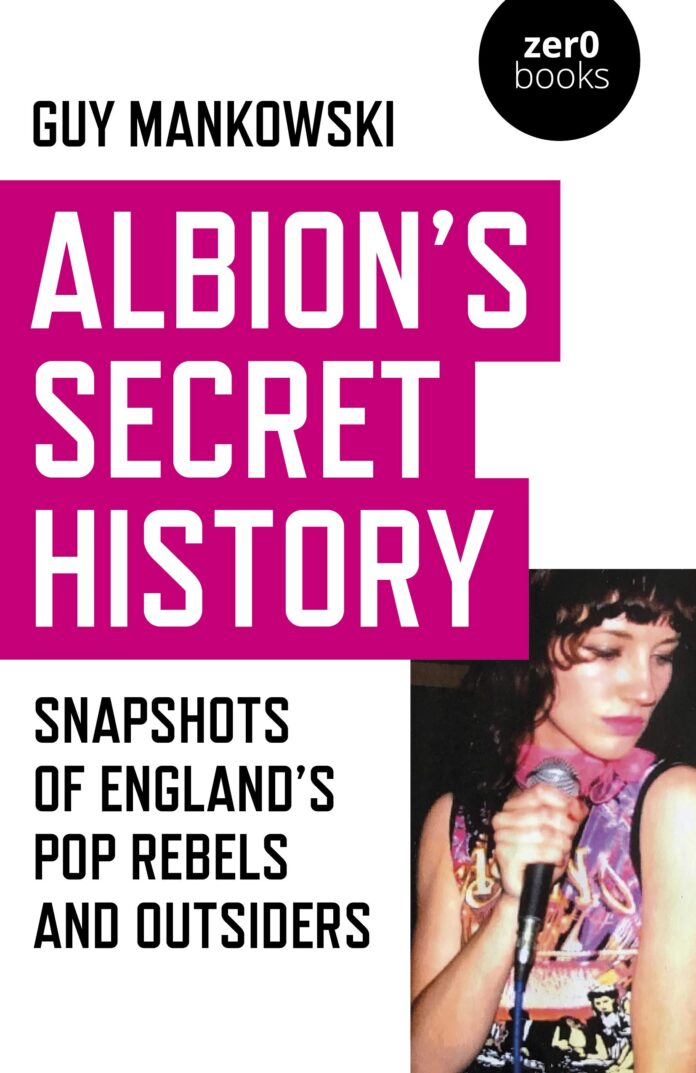 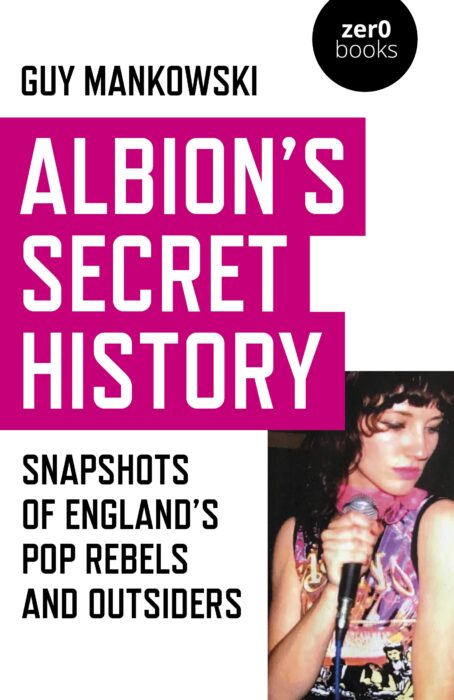 Guy Mankowski is the author of How I Left the National Grid and Dead Rock Stars, two highly enjoyable fictions that use alternative pop music as their guiding light. His latest book, Albion’s Secret History, Snapshots of England’s Pop Rebels and Outsiders is a slightly new venture. A collection of popular, comparative essays looking for what could be defined as the soul of England through examples of its music and literature, Albion’s Secret History is an enjoyable skim through an enormous subject, though the book feels like a precursor to a more substantial follow up.

Nevertheless; Mankowski must be applauded for his guts. Where fiction does allow a certain amount of leeway in terms of employing facts and figures and points of view, a set of essays like this one, however concise and diverting, must marshal evidence in a clear and convincing manner and, at some point look to either confirm or reveal some new or enlighten. This is a hard task.

The book is well named: the ever-vague Albion trope serving for the mythical/mystical properties of the quest facing the author. Given the fact that he uses the word “Snapshots” in his title, it seems Mankowski is smart enough to realise that any “search” for just what makes English culture so Different, so Appealing, is a forlorn one. Regardless of whatever he uses to prop up his arguments, I was immediately reminded, when reading the chapters that employed Barrett, or Suede, for example, of Peter Ackoyd’s killer phrase concerning England; that the country can be seen as a “landscape and a dreamscape”. Making things even harder for himself, Mankowski bravely concentrates on the dreamscape and populates it with subjects that aren’t the normal ones. No Rolling Stones mooching around Avebury, rather Gazelle Twin commenting on quotidian spaces such as shopping centres. And the very idea of trying to nail what made English – let alone British – popular culture so powerful when circumventing the legal, technical, historical, economic and distributive, and political aspects of the postwar Anglo-American music industry, not to mention the established media built up with the resources of Empire, is like trying to understand what is really going through the head of the poet who wrote The Battle of Maldon.

A number of chapters do often have the quality of a snapshot, with all its attendant properties; blurred ideas, over exposed elements, or a focus on matters that seem incidental. Sometimes Mankowski is on the cusp of forcing through a terrific idea but falls back too quickly on an easily digested precis, a snapshot in other words. The chapter dealing with Richmal Crompton’s William Brown is one instance, where the idea of a Home Counties idyll is maybe shown at the expense of the hidden depth in Crompton’s work (some of the early stories such as ‘William’s Burglar’ from 1922’s More William are far more revealing about interwar British class consciousness than you would expect).

The comparative nature of the book, too, brings to mind the act of looking at old portrait photos when one of the people photographed is unrecognisable or erased. This works with the chapters that could be seen as “spectral” in nature, such as the one on PJ Harvey, Tricky, Massive Attack and Stormzy. But it falls down when the subject is ripe for a longer look; the case with the chapter dealing with Luke Haines and the Long Blondes. Mankowski has identified a very interesting subject only to stylishly skate around a number of “Sheff” or Britpop tropes – and, sadly, employ a flippant Owen Hatherley quote on the Blondes  to boot. In this reviewer’s experience, though big fans, The Long Blondes were in no way a “Pulp Mark II”, rather a very interesting and complex band with marked forward-thinking, Europhile tendencies and a worldview that marked them out from many of their contemporaries. But then, my grumbling reveals the real conundrum of this book. Do we readers allow Mankowski his muse? Or does the very nature of trying to nail the secret and rebel histories of English culture demand a book from each of us?

Even so, and despite the earnest words in the foreword and conclusion, Albion…. is a fun read. Armed with the knowledge that this is one take amongst many on “England”, the reader can relax, aware this is a doomed mission from the outset and look to see what insights and forgotten treasures Mankowski’s mudlarking has thrown up. The terrific chapter on Peter Cook and Evelyn Waugh when talking of class privilege is kept on-point. The idea of The Fall, Gary Numan and Joy Division’s music existing in a number of liminal, “psychic” spaces is not really new, but done very well here and a nice counterpoint to Mark Fisher’s writings on the subject. And the enjoyable tall tales linking Syd Barrett and Nick Drake, Rupert Brooke and Isaac Newton are the stuff of a long-lost Robyn Hitchcock b-side. (Though sadly, inevitably, drugs yet again cloud this story, even though Barrett’s life was by no means a “tragic” one after his musical career, in fact it could be seen as quietly heroic.)

A warning to the curious, then. Those thinking that – just like clicking on those adverts for combatting hair loss or finding a perfect diet –  something will be revealed outside of yet more promises, or just an enjoyable chance to retire to Mankowski’s record and book collection, will be disappointed. The conclusion, documenting the hopes, trials and tribulations of the British Labour party’s “Corbyn era” also feels shoehorned on, and would maybe be better presented as an opening credo for the book. Is this a secret history as the title suggests? I would argue not. Rather this book is Mankowski’s story, revealing his disappointments, hopes and generation’s take on what England is. And we all have our own take on that.

(Albion is published by Zero Books.)