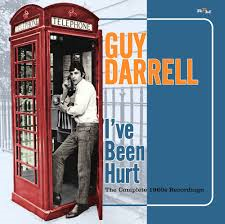 First-ever official collection that brings together all the A and B sides that the “I’ve Been Hurt” hitmaker recorded during the 1960s….Ian Canty travels from one end of the decade to the other with the journeyman singer…..

Strong-voiced, blue-eyed Soul vocalist Guy Darrell’s story bears comparison with a host of other singers through the turbulent ten year cycle that was the 1960s. It was a tale of label hopping, trying beat the competition to scoring a hit with various “hot property” cover versions and cutting your cloth to fit the day’s latest trend. Beat Pop, Hammond organ-enhanced dancefloor pounders, Freakbeat, Paisley Lite-Psych, Cabaret Club Soul, whatever was this week’s new thing. As it turned out Darrell (real name John Swail) would have to wait until well into the 1970s to achieve any sort of success in the charts, but we’re getting ahead of ourselves…..

Enthused as many were by the impact of the Beatles, Guy Darrell and the Midniters were an archetypal Beat combo and the four tracks that are featured here comprised their efforts for the Oriole label in 1964. They’re typical for the time, not bad at all, but nothing too much to make them stand out from the hundreds of bands up and down the UK doing the same thing at the time. However, a quantum leap occurs with the change of name (and possibly personnel, the exact details of this seem to be lost in time) for the backing band to the Winds Of Changes, which resulted in a brilliant single “One Of These Days”/”Stupidity” with the Solomon Burke-penned flipside possibly having the edge. The Garage Soul grooviness just pips for me the more “Pop” approach of the also very good A side. Any way you look at it, it was a step up from the formative Beat sounds that preceded it and Darrell really started to find his voice here.

As time went on, that voice could be a double-edged sword as the producers of Darrell’s work would concentrate on it so much that it is difficult on a few of the tracks present to pick out the instrumental backing, the vocals being mixed in such an upfront way (“Hard Lovin” is probably the key example of this tendency). “Somewhere They Can’t Find Me”, fairs better than most of this time period with some neat guitar work and at this point in time he became focussed on a Soul direction which did really suit his voice, yielding some good results in “I’ve Been Hurt” and its flip “Blessed”. It has to be said often the straight plays for chart action resulted in throwaway MOR like “I’ve Never Had A Love Like That” and “Turn To Me”, but when Darrell was provided with decent material he generally delivered the goods.

By the time 1967 was rung in changes were afoot and in order to keep up with the rapid movements of “Swinging London” Darrell released one of his best records in “Evil Woman”/”What You Do About That”. Trippy Paisley Pop/Soul with a wicked guitar line, “Evil Woman” should have been a hit, but fates conspired against it. The pirate radio stations that had staunchly supported much of Darrell’s work had been shut down by the authorities in advance of their own BBC Radio One taking to the airwaves, with the added unwanted complication that many others were having a crack at the song too, including the Troggs.

That setback was compounded by the next release, the cover of “Cupid” that was a decent enough treatment, but to the Pop World of December 1967 must have seemed from another age altogether. The following version of Elton John’s “Skyline Pigeon” was a vast improvement with its hint of prime 60s Bee Gees (try not to think of the “Lesbian Seagull” song from “Beavis and Butthead” when you listen to it!), but again didn’t so much as graze the charts. Guy closed out his 60s run with the actually groovy “Birds Of A Feather” which was furnished with some great guitar and an attempt at crossing Country Soul with Bubblegum(!) on “How Are You”.

After that Darrell and his then-current band Syndicate moved with the times and became “heavy” contenders Deep Feeling. Just as they settled on the Prog circuit, something no-one could have really predicted happened. The Northern Mod nightclubs of the 60s had developed into the full-blown cult of Northern Soul which was driven by stomping “four to the floor” tracks rescued from obscurity by DJs who vied with each other for the latest big tune. “I’ve Been Hurt” fit the bill and by 1973 the scene was big news, with the result being this seven year old record was a hit. Darrell and Deep Feeling were called onto “Top Of The Pops” and a raft of personal appearances, with Soul fans probably bemused by the band’s scraggy Hippy image. After this burst of success and the attempt to record new material that fitted the demand that floundered, Deep Feeling retreated to the Pub circuit and Darrell became a landlord himself. Sadly he passed away in 2013.

Guy Darrell was another 60s singer would could definitely wail, but was held back by not writing his own material. As a result he was fed with random cover versions out of necessity, but this in turn didn’t make for any coherent image that fans could identify with. This meant that even if he had pulled a hit out of the bag during the 60s, following it up would have been tough. When the hit did eventually come, it was on the back of a movement that he possibly wasn’t even aware.

Despite this rocky career path there is a lot to enjoy here, with the near Freakbeat of “Evil Woman” and lots of quality Soul Pop like the hit “I’ve Been Hurt”. I’m very pleased that Guy Darrell eventually got his day in the sun because his relentless plugging away for a decade or more combined with his obvious talent deserved it. This new compilation gives a new generation a chance to enjoy his efforts and despite only making the charts that one time, listening to it today, it has more hits than misses.