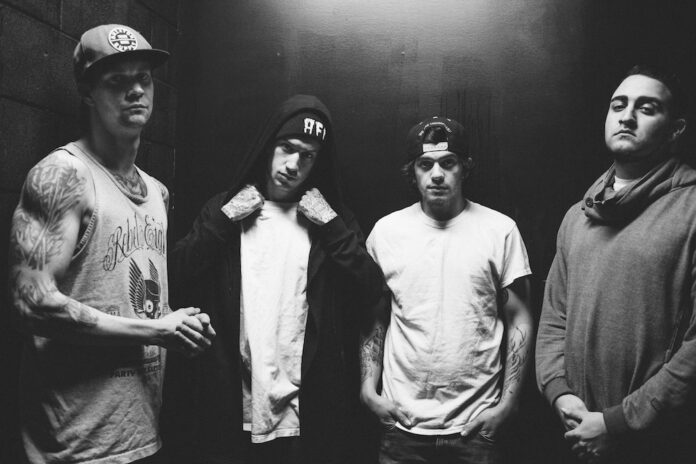 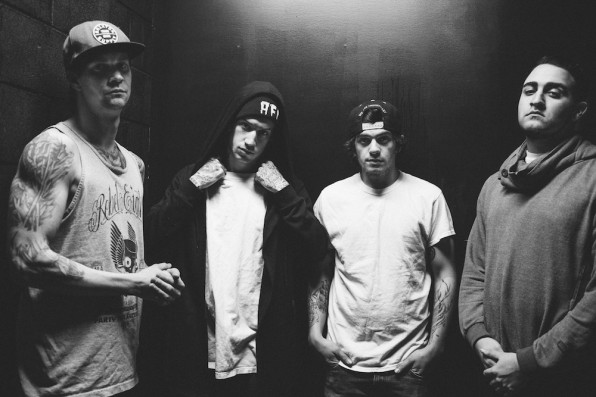 US punk / hardcore band GutterLIFE have a new EP out which Sophie Luchinsky has been talking to the band’s Matthew Van Rossem about. Find out his thoughts on the release, track by track, below.

“This album is a bit more personal than the last,” he says “I was going through a really hard time when I started writing it and I feel that the songs on this EP translate a lot of that emotion.”

There are six tracks in the album which are all very punk rock in nature featuring rapid and impetuous music. Songs like “Complacent” and “Dropping Bombs” are great examples of their abrasive, balls to the floor playing. The lyrics are a vital part of the band’s identity so we asked Mathew to explain some of them.

“‘Complacent’ (see video below) is a follow-up to ‘Like Cattle’, urging the listener to not only wake up and see what’s happening to our world, but to fight back. I encourage everyone out there to do something. Don’t just accept things for how they are. Continue waking others up. Your voice does matter. Use it before it’s too late. As Malcolm X would say, “By Any Means Necessary”‘”

“‘Dropping Bombs’ is a song that when I look back on it, I feel like a bit of a cynic. That the world is a dark place and there is no hope for any of us because of the few that ruin it for all of us.

“I said “We aren’t dropping bombs to save the world” because we aren’t. It’s being done in the
interest of the few in power and its obvious to everyone but those who still choose to stay
asleep to it. Man’s willfull ignorance is self destruction and the world won’t miss us when we’re gone.”

Great guitars lines and melodic vocals with a brilliant guitar solos and meaningful lyrics – that is what GutterLIFE are about.

“‘Sail Home’ is a song that I wrote when I was afraid the world was going to end any day. I was afraid that things were going to crumble overnight and that I was going to lose the person I cared most for and everyone else I loved and that there was nothing I could do about it. It even caused me to end my relationship several times because I didn’t want to feel the guilt of not being able to do anything about it. I’ve since, changed my opinion on the matter. I am ready for this world to end. Bring it.”

“‘Symptoms Of War’ is about the horrors of war that no one sees and how those in power never seem to pay the same price as the poor they send to do their bidding. There is a war on everything these days … But sometimes the hardest battle is the one being fought inside your head against your heart.”

“Pursuit Of Hopelessness” is one the best songs in the album with amazing guitar riffs and so much passion in it.

“This is the song that best explains the name. All we really want is to follow our passion. We don’t want to live as slaves, stripped of all creativity we aspire for something greater. This band has given us a lot in such a short time. We have met so many amazing people through this band and it’s those people who make this worth the hardship. We may not make money, but we’re making memories doing what we love and no one can ever take that away from us. So if we die poor in wealth, we’ll certainly die rich in life experiences. Money comes and goes. Legends live forever. Stay true to what you love and fuck a 9 to 5.”

Talking about the lyrics he wrote, Matthew Van Rossem tells us “I’ve written the lyrics and instrumentals so far for GutterLIFE, but I do have a producer who works alongside me for the process. His name is Frank “Bones” Laudicina and I go to him if I am ever unsure of something or need a direction. I respect his opinion and he’s a valuable part of this project and has been since the beginning, alongside our drummer, Jay.’

Telling about their future gigs GutterLIFE says “We just wanna tour. We would tour the whole world if we had the money to make it happen. We do everything we possibly can though with what we have. This is our lives. We don’t wanna stop. We don’t sleep on this band.”

The EP can be purchased here: matthewvanrossem.bandcamp.com and GutterLIFE can also be found on Facebook.

All words by Sophie Luchovsky. More writing by Sophie on Louder Than War can be found at her author’s archive.