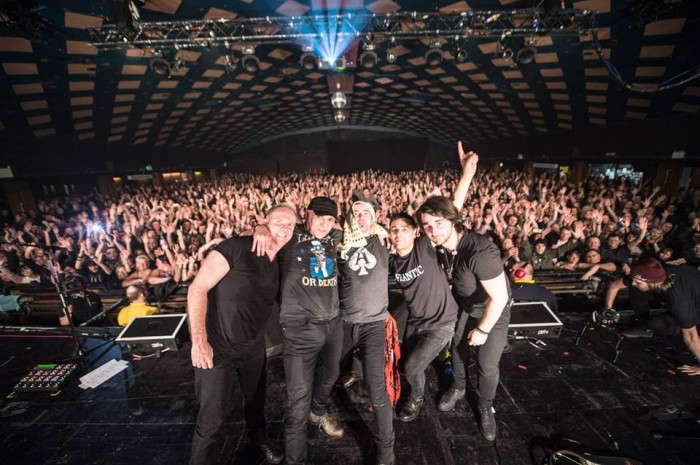 Hot on the heels of his interview with Dante Gizzi of rockers band GUN, where they talked about his band’s new single and album, comes this, Harry Mulligan’s review of the band’s Barrowland’s gig.

When a band have spent time with a Major label like A&M, cycled through pre-production and production at residential recording studios like SARM in London and ICP in Brussels, they start to acquire that muscled, polished look similar to the one The Raging Bull – Jake La Motta had in his heyday, when he stepped into the ring.

When GUN came home to the Glasgow’s Barrowland Saturday night past, a two minute walk from where Dante and Jools Gizzi grew up in Glasgow’s Carlton district of the East End, the denizens therein were anticipating their arrival. They hadn’t exactly left in a Skoda, but it was a Masarati Granturismo that they pulled up by the Barras on Saturday, March 28th, 2015; sleek, feline and a bit menacing– like a cat.

It was dismal and rainy as I stepped out of the taxi and into the arena. Words like ‘awesome’ and ‘epic’ are the bane of a writer’s life because people overuse them, or use them incorrectly, thereby diluting them of their potency.

GUN, however, were ‘kin awesome, make no mistake!

Can I get a witness?

I had made it just in, in the nick of time for Let it Shine, the EPIC tune from the new album Frantic, recorded here in Scotland at Gorbals sound and it foreshadowed what lay ahead in this remarkable homecoming Gig.  A few tunes in, after Seems Like I am Losing You, Don’t Say it’s Over, and Better Days, the crowd of die-hard GUN fans had the place bouncing.  I couldn’t resist navigating my way into the moshing zone just to feel the wooden ballroom floor rise and fall like a heavyweight boxer’s chest as he lay on the canvas for a standing ten count. The audio visuals were well thought out as images projected behind the stage were of two boxers in the ring, Benny Lynch who adorned the cover of Gallus, probably being one of them.

Dante Gizzi’s heartfelt dialogue with the crowd fed back into the adulation they felt for him. In 2015 it’s all about the principle of reciprocity.

‘The first time I played here was amazing… I think this is better!’

By the time they played One Wrong Turn from the new album, Frantic, six songs in, I’m paying close attention to the production values of this seasoned lot. I watch a lot of bands, so when I get to see and hear a band with this kind of provenance, I’m there, fully Present, and I don’t miss jack-shit.

There are no busy fills like you see with younger, un-produced artists; nothing is self-indulgent, everything is measured, there’s an economy of movement, a distribution of chiaroscuro – light and dark, both visually and sonically, of space and time. I’m looking at the ergonomics of how the stage is laid out, how he drummer, Paul McManus has configured his kit, I can’t help it. I can’t put my finger on why I’m fascinated by the detail of how they have put this thing together, but I am!

Dante brings down the dynamics as he reminds us all that we are on our way to Higher Ground, also from Gallus, before carrying on in the same vein with Something to Believe In and Hold Your Head Up, from the new offering, Frantic.  It’s a classic Gun composition, and captures a familiar taste of bygone Americana that seems to harken in new hope and a new vision for tomorrow.

The show and the performance goes by far too quickly, as Gizzi points out, gesticulating with his head towards a rapidly diminishing Set-list, as Something Worthwhile, title-track – Frantic, Welcome to the Real World – another from Gallus. and Inside Out (side you) has the crowd in full voice and it’s like being up the jungle at Celtic Park on Old Firm day.

The familiar refrain from So Lonely by the Police classic is inserted. A chord has been struck! I have to turn away from the stage to look out at the audience. I’m a Glaswegian who grew up in AMERICA and I’ve only ever heard tell of this shit going down at the Barrowlands. The crowd is at boiling point. How cool is this? I get to witness a wee bit of history being made. Dante Gizzi is laughing in mid-flow as the crowd belts it out: – Inside – Outside You – Inside – Outside You – while he begs the questions:

‘Was it truth or lies? Was it all worthwhile? Were you criticized?’

No wonder these Guys resonate so much with this Scottish crowd, all of it.

At one point, their guitar tech is brought on to join them on acoustic, warm-heartedly pointing out to this bi-Partisan crowd that he supports Glasgow Rangers, stating magnanimously that we can’t really live without each other, can we?  No! Of course not, he’s completely right. It’s the touch of a consummate professional that he plays to the crowd, the whole crowd and alienates no one, regardless of his colours – music transcends all, and Glasgow’s diversity, at least tonight, is its strength.

Just when it can’t get any better, crowd-pleaser, Word Up follows, closely by the announcement that: ‘This is our last song!’ Its Steal your Fire.

The band leave the stage, and then return with mutterings about a curfew. Labour of Life, Taking on The World, and Shame on You, finish the night.

I walk back along the Gallowgate eating my chips and talking enthusiastically to Randoms:

‘That was ‘kin magic’, one of them says!

I’ve wandered all over the planet in search of my own Rock n Roll Mecca:- Seattle, San Francisco, Hollyweird, Los Angeles, London, Paris, but I had to come full circle to realize I’d already had it, right here at home.

Glasgow really is the Citadel of Rock!

All words by Harry Mulligan whose Louder Than War author’s archive is here. Both photos courtesy of Andrew Laing Photography.