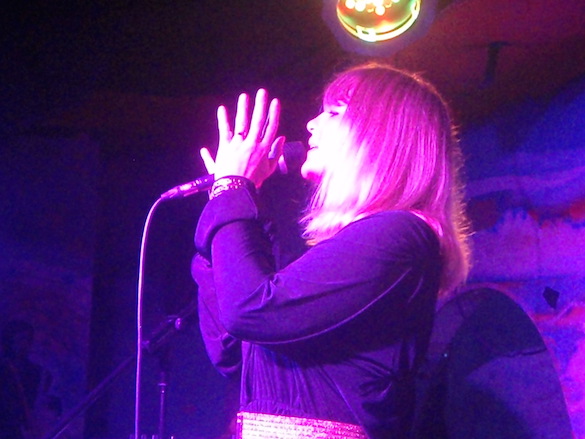 Gulp is the new band formed by Super Furry Animals bassist Guto Pryce, singer Lindsey Leven and two others. Their new album came out a week ago and it’s brilliant. Check out our review here for confirmation. To support it they played a couple of London dates last week, one of which Louder Than War’s Keith Goldhanger was at. His review’s below.

I’m not interested in films and cinema to be honest. Can’t be arsed to put the telly on half the time. If I was into dragging myself to the cinema one day then ideally it wouldn’t smell of food and it would be to see some meaningless film with some cops chasing robbers or cowboys chasing Indians on horses that had a subplot of a beautiful girl falling in love with the main man in the movie with a spiralling drink problem that would end with the two people riding on horseback off into the sunset.

And be soundtracked by GULP.

GULP are from Cardiff and we fell in love with them during a spare half hour at last years SWN festival when they played a short sharp early evening set that made at least one of us extremely happy for being there, and for managing to capture a band that we just wanted to tell the world about.

Of course we did nothing about it. We just came home and played their tracks over and over in the hope that at some time in the future someone would bring them here so we could witness this again on our own doorstep.

Sonic Cathedral have been that someone and it is they who have released the debut GULP album Season Sun and this is the London performance to complement it.

If you’re looking for a band you can dance along to that not only sound like a mash up of Hot Chip, a Nancy Sinatra lead, Gallon Drunk, Goldfrapp, Broadcast and even Temples, then this is it. Each song has a psychedelic sound (as does everyone who plays in this place) and each song with plodding tight bass and bleepy synth sounds adds the perfect soundscape that would be ideal if you happened to be not just riding off into the sunset on a horse but it works on the night bus as well.

Each song is as infectious and complete as the next and each song is something that the listener immediately will want at their disposal to learn the words, nod their heads too and dance in the afternoon sunset to.

The band include Guto Pryce (Super Furry Animals) on bass, who plays like a machine holding court with intense but dance based rhythms and after forty minutes of buzzing analogue synths and dance based pop music we’re left wanting a bit more.

They could have just started again and played their set a second time and it wouldn’t have been any more than we couldn’t already have swallowed.

Words by Keith Goldhanger. More writing my Keith on Louder Than War can be found here. You can also find Keith on Facebook and Twitter (@HIDEOUSWHEELINV).