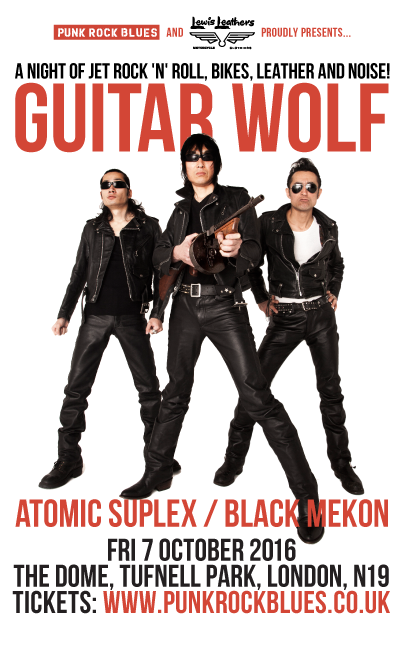 Tickets – https://www.punkrockblues.co.uk/guitar-wolf.html
Guitar Wolf- T-Rex From A Tiny Space Yojouhan official video-
Punk Rock Blues and Lewis Leathers present Guitar Wolf , Atomic Suplex and Black Mekon at The Dome in Tufnell Park on Friday 7 October to celebrate A Night of Jet Rock n Roll, Bikes, Leather and Noise! The show also coincides with the release of Guitar Wolf’s amazing new album T-Rex From A Tiny Space Yojouhan.
Guitar Wolf are a total rock’n’roll experience. Self styled as The World’s Greatest Jet Rock’n’Roll Band they take rock’n’roll to it’s logical conclusion and beyond.
Jet Rock’n’Roll is Guitar Wolf’s unique combination of extreme volume, heavy distortion and screaming. A Guitar Wolf show is a complete energy overload that is akin to being in the blast zone of a sonic atom bomb explosion. Taking their influence from 50’s rock’n’roll, The Ramones, Eddie Cochrane, Johnny Thunders, Joan Jett and Link Wray, the ‘Wolf then mix it up into a maelstrom of noise.
On record Guitar Wolf inject their live energy into the recording process by never recording anything below red and on one occasion recording an entire album without having ever played any of the songs before-to ensure the sound was raw enough! In fact, Guitar Wolf’s sixth record, Jet Generation proves if you rock hard enough you can break the laws of physics: Jet Generation is the loudest CD ever recorded in history of recorded music…
Bear witness to the live extreme noise terror that is Guitar Wolf
T-Rex From A Tiny Space Yojouhan by Guitar Wolf is out now!
Tickets – www.punkrockblues.co.uk