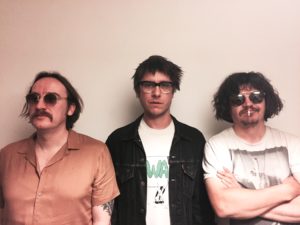 Guide Dog – I Am The Daddy

Louder than War’s Ioan Humphreys gets down and dirty with some brand new Welsh grunge.

Please pardon the pun, for which I should very rightly be shot for, but Wales’ Guide Dog come with one hell of a pedigree. I Am The Daddy may be their debut single, but the constituent parts of Guide Dog have been around since 1999…(or 85 dog yea….ok, ok, ok!)

Guide Dog are Peter Roberts (vocals/ guitar), John Maloney (drums) and Ian Russell (bass).Pete and John met in school and were 2/4 of Robot’s In The Sky, which first put out a red double A-Side 7″ in 1999 on the Cardiff Council funded label Complete Control.  Following that they put out their first LP as Tetra Splendour on EMI. Ian Russell then joined during a period as a five- piece called People In Planes. Following the aborted 3rd record, Pete moved to London and helped form the first incarnation of Cold Specks. During his time making and touring the first two albums with Cold Specks, the initial electronic incarnations of what would become Guide Dog were spawned.

The track opens with a nice noisy intro which leads into an infectious riff and a heavy percussive sound. Roberts’ drawling vocal delivery is a welcome change to some vocals around these days. It’s so laid back it could fall down any second and this perfectly suits the clever wordplay of the lyrics. Lines like “I’m a zombie with a spreadsheet” and “I’m on first name terms with my GP” are delivered with a 21st century angst that most people can relate too. Clever stuff.

The chorus comes in and it really does have a ‘classic grunge’ feel to the way it’s sung. Roberts’ vocals conjure up both The Lemonheads and Chris Cornell in its ability to sound both raw and sensitive at the same time.

Two thirds through there is a clever breakdown/solo started with the announcement “the answer my friend sounds like distortion” which is a delicious dirge that eventually leads back into the track and a noisy finish.

As I’ve already mentioned, this band do have a musical pedigree and it shows in the way that they aren’t afraid to take risks both with their sound or lyrics. This impish quality very much reminds me of the output of Andrew Falkous (Mclusky, Future of the Left, Christian Fitness). Guide Dog seem to embody the same disregard for rules and regulations as Falkous does, and boy is that not a bad thing. Nice stuff. The LP can’t come quick enough.

The album entitled ‘Lovely Domestic Bliss’ which was produced by long term collaborator Dan Austin (140db), and was recorded in three days in Rockfield Studio and is coming out on Pete’s own label Hi-Vis Records (digitally everywhere) and on 12″ Vinyl (through iamtheguidedog.bandcamp.com) on July 7th.

January 28, 2020
0
Lodestar in 2018 was a reawakening of one of folk music’s most important voices. Now the journey continues as Shirley Collins makes a pilgrimage to the heart of the landscape that fuels her work.
Read more

INTERVIEW! Paul Gray is back in The Damned and talks about...

July 26, 2018
We use cookies to ensure that we give you the best experience on our website. If you continue to use this site we will assume that you are happy with it.Ok