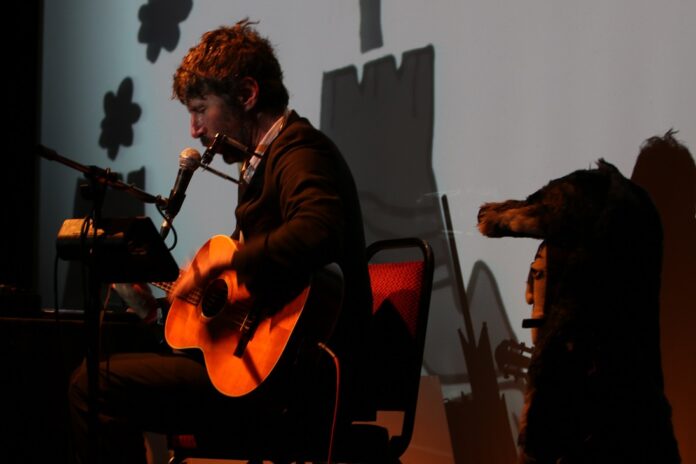 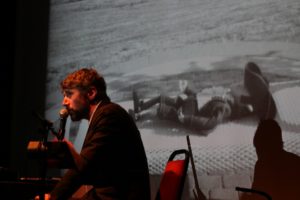 Photos (right and in gallery below) by Paul Clark

Gruff Rhys’ new show ‘American Interior’ is part pop concert and part history lesson as he tells the surreal tale of 18th century eccentric John Evans who set off from the principality in pursuit of the fabled Welsh Native American tribes.

Evans was a farmhand living in abject poverty before being inspired to sail off to the wild frontiers of America to find the mythical Welsh speaking tribe Madogwys who were thought to be the descendants of Prince Madoc who sailed to the new world in the 12th century.

Former Super Furry Animals frontman Rhys is distantly related to Evans so sets off on his own quixotic trip Stateside retracing this epic journey, He travels across modern day American in the company of a specially commissioned three foot high felt model of the deluded explorer who also makes a brief appearance in this hugely entertaining show.

It is not a spoiler to say that Evans didn’t find the Madogwys, but by using new songs, PowerPoints and a very dry wit Rhys tells the story of a man on a mission. Evans is an idealist who drifts along surviving malaria, alligators, defects to the Spanish, accidentally annexes North Dakota from the British and even stages a one man defence of the prototype American/Canadian border before dying in poverty in New Orleans.

In many ways this is a love letter to one of the lost greats of Welsh history who now takes his rightful place in history after Rhys came across a documentary about the lost tribes, and decided to write a book/concept album about this accidental revolutionary.

In the hands of a lesser talent this idea could have been a self-indulgent disaster, but Rhys still has an uncanny ear for a pop tune, and this show is packed with gems like the mournful title track, an ode to manlove If We Were Words (We Would Rhyme) and the driving Allwedellau Allweddol, complete with Native American chants.

It does help when you also have the voice of an angel, but Rhys’ clever lyrics carry the narrative along quite merrily, including one tune using direct quotes from letters describing his antics that Evans sent to one of his sponsors.Rhys is clearly on his own mission to pay proper tribute sonically as he adds dub plates, drum machines, mouth organ and even a metronome to his inspired guitar playing

The biggest surprise is how funny this show is as Rhys deftly narrates a series of illustrated slides, complete with witty asides, as he muses on Evans’ arrest, his unlikely elevation to the command of the biggest expedition ever mounted at that time in America and surreally how his relatives were battling with internet dial up in their hovel back home.

‘American Interior’ is a timely reminder that pop shows can be more than a few teenagers churning out tired indie rock, and saying nothing at all, but instead live music can inform and challenge the audience. It is a big ask to sit through two hours of new tunes and slides about a bloke you have never heard of, but when it is a beautifully executed labour of love like this then it is well worth the effort.

‘American Interior’ the album is out now on Caroline International and ‘American Interior: The quixotic journey of John Evans, his search for a lost tribe and how, fuelled by fantasy and (possibly) booze, he accidentally annexed a third of North America’ is published by Hamish Hamilton.