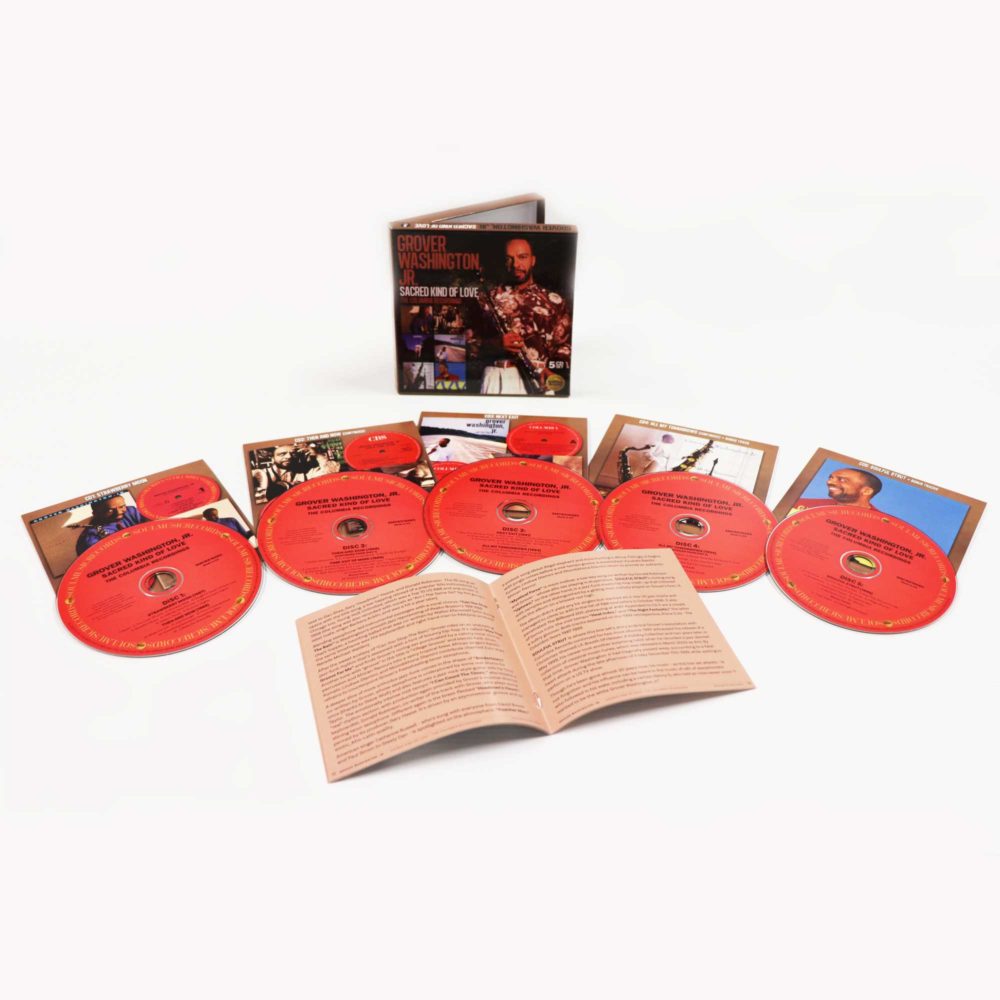 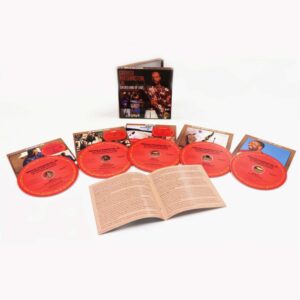 Grover Washington Jr was into his forties by the time of the first album here, but in a sense, he was still conflicted about the dual nature of his muse. On one hand, he had made the commercial breakthrough with his own very smooth hybrid of Funk and Jazz, but on the other, you got the feeling that he saw himself drawn to the “more authentic” life and sound of the Jazz and Blues that had first enchanted him. The Buffalo-born saxophonist had a stint in the armed forces before moving to Philadelphia to kickstart his musical career.

His parents were keen jazz fans and the young Grover quickly became obsessed by the music, so much so that his father brought him a saxophone at the age of 8. Learning at the feet of the masters (sometimes almost literally when he sneaked into Buffalo’s Jazz and Blues bars), the young man slowly developed a prodigious talent. As a result, he started playing professionally, briefly teaming up with a band called the Four Clefs before he was drafted.

In 1970 he made his first studio appearances as a sideman, but soon he began playing and recording in his own right. Having his first successes in the early 70s with his own mainly instrumental Jazz Funk creations on the Kudu label (the Mister Magic album was very popular, topping the US R&B chart), he then moved to Elektra, where 1980’s Winelight LP was a big seller and included the Bill Withers collaboration Just The Two Of Us, a worldwide hit single.

In 1987 he made the jump to Columbia and cut his official debut for them Strawberry Moon (the previous year had seen A House Full Of Love, the soundtrack to The Cosby Show), the first of the six albums included here. This platter found Grover deep in the Jazz Funk formula with guest singers featured on the song-based material. The easiest comparison one might make to the sound achieved on these offerings is the Crusaders’ single Street Life that was cut with Randy Crawford, driving funky Jazz chops topped with soulful vocals.

Monte Carlo Nights benefits from an emotional reading by Spencer Harrison and Jean Carne spearheads a jazzed-up version of Bacharach and David’s The Look Of Love plus the driving Keep In Touch, one firmly in the Street Life mode. A very good effort with a real bouncy charm. Washington’s cool sax blowing is best utilised here on the instrumentals Shivaree Rock and Maddie’s Blues and overall Strawberry Moon is a pleasant and easy-going selection.

There & Now, which came out in the following year, was a complete change in style. Grover went back to his roots and the album is in full-on Jazz mode on the eight lengthy instrumental tracks. Herbie Hancock was among the luminaries drafted in and he provides Just Enough with his mighty keyboard talents. Tasteful, mellow Jazz perfect for when just emerging from a torturous hangover. Grover is on good form, with a serenade for his daughter Lullaby For Shana Bly being lovely, gentle stuff.

The sad sounding Jazz shuffle of Stella By Starlight and the graceful piano and sax duet In A Sentimental Mood are also more than decent. Mental images of The Fast Show’s Jazz Club are hard to stifle, but it is pretty elegant and easy on the ear. One more for the hardcore Jazz fans, as it was no doubt intended.

Normal and more up-tempo service was resumed on third selection Time Out Of Mind (the title track is an entertaining go at the number from Steely Dan’s Gaucho LP). The Hip Hop percussive beats of opening track Jamaica see to that, a nice bit of upbeat Funk. Elsewhere there is a fair amount of Easy Listening style muzak (Nice-N-Easy being the main offender), but also some more appetising Funk stuff too. Fly Away is light with some prime slap bass action and the album’s single Sacred Kind Of Love has an ace vocal from Phyllis Hyman. Unspoken Love benefits from a cool and sparse atmosphere and brings the album to a good finish, but ultimately Time Out Of Mind isn’t quite up to the level of Strawberry Moon, for me at least.

His fourth album for Columbia, however, was an improvement, kicking off with a fine and Funky 80s update of Dave Brubeck’s Take Five and Grover getting a commanding vocal performance from Nancy Wilson on the cool breeze of Your Love. The self-penned Summer Chill is a smooth groove par excellence and Lalah Hathaway (daughter of Donny) shines on the soulful Love Like This. The vocal big guns don’t get any bigger than the Four Tops who guest on Til You Return To Me, with Levi Stubbs on top form this tune is a real treat. Check Out Grover has the man meeting Hip Hop head on with human beatbox from Doug R Fresh and Man Slaughter rapping in praise of “Mister Magic”. Of course, the man himself remains implacable, that sax going its own lazy way and the brew conjured up works marvellously.

Two years elapsed before follow up All My Tomorrows emerged in 1994, but its Old School acoustic Jazz sound meant it sounded as it could have been recorded any time during the previous 40 years. A step back to the sound of Then And Now, but for me, this just has the edge on that one, an expertly crafted example of the form. There was a sense that Washington made these hard Jazz/Blues LPs to show the Jazz critics (who always saw him more as an R&B saxman) just what he could do and how authentic he could make them sound, but he is relaxed and no doubt enjoying himself here. Washington is on great form, seldom grandstanding, preferring to use his sax to provide more of a guide and direction on the tracks where there are no vocals.

Freddie Cole, Nat King Cole’s brother, sings on two tracks I’m Glad There Is You and Overjoyed and also duets with Jeanie Bryson on For Heaven’s Sake, an excellent “late night” Jazz ballad. Nat’s shadow hangs over this record a bit, with two of his standards Nature Boy (Woooo!) and When I Fall In Love given the big band treatment. A satisfying listen for the Jazz-inclined, this disc comes with a bonus track in Every Day A Little Death, which is very much in the style of All My Tomorrows’ sound.

With the bulk of the writing on 1996’s Soulful Strut being done by Grover himself and producer Gary Haase, it is perhaps the best selection on this box and a good way to end the set. Kicking off with the neat title track, he’s back in the Smooth Funk field for the most part and thriving in it. Guest vocalists are again well utilised, with session singer Catherine Russell, who later worked with David Bowie, faring particularly well on the anti-big game hunting song Poacher Man. This also has some fine backing vocals from Bakithi Kumalo and Lindiwe and Ntombkhona Diamini.

Driving Funky Hip Hop powers Uptown and Play The Groove For Me, one hesitates to use the word edgy with such a laidback cat as Grover, but it is close. Bordertown is classic Grover Washington smooth Funk and some cool brass enlivens the R&B of Headman’s Haunt. The two bonus tracks which end up this disc, Heat Index and The Night Fantastic, are pretty much standard Grover, but wrap things up nicely.

This is not quite the full Grover Washington Jr Columbia story as he also put out a Christmas collection Breath Of Heaven and Aria, a more classically toned piece, before his death from heart failure after a television performance in December 1999. Space has meant that the six albums sit a little uncomfortably over five discs in this set. The “Jazz” LPs are the ones that are split across two discs, which does not help them make an impact. All My Tomorrows, a pleasing and cohesive effort, suffers a little as a result. I realise that commercial considerations have to be taken into account, but it is a shame.

On the plus side there’s a great sleeve-note from Charles Waring, who takes us through the albums in detail and overall this is a good set for people who like their Funk seasoned with Jazz and vice versa. During the 80s and 90s Grover Washington Jr was perhaps a little caught between the smooth Funk formula he had perfected and the pure Blues and Jazz he clearly loves, but he always sounded totally relaxed and at home whichever genre he dabbled in.