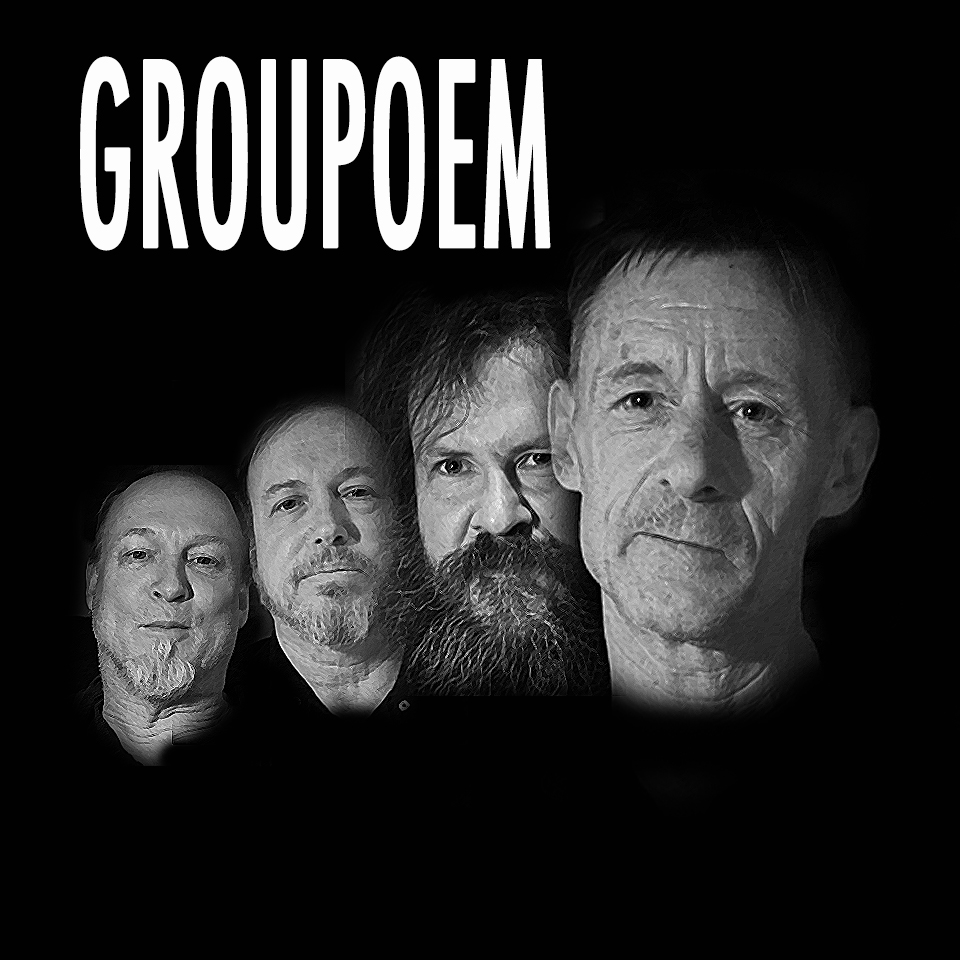 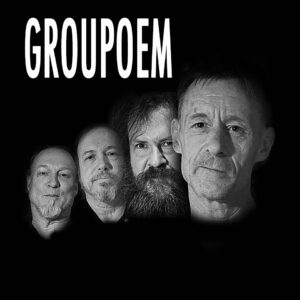 Masked by strange and unusual life circumstances, each with unique and atypical histories, I spoke with Terry, Darren and Marph, making for one of the most fascinating conversations I’ve ever experienced. After the band admitted to being severe fans of guitarist Terry Robinson, including Terry himself, I came to realize that he is likely to be one of the most talented musicians alive today.

The band originated in 1983 as Mr, Science, but in 1986 Darren joined the band and it became Groupoem. After a 25 year separation Darren spent time searching for Terry and found him in Vancouver, and the band began to record again. Coincidentally the members all moved from Toronto to Vancouver before they reunited.

Darren Katamay probably has the life we are most accustomed to, trying to support a family and playing music. For years he tried to track Terry Robinson down in Toronto with no luck. Finally he got together with Chris Lee the drummer and through a friend in another band found out that Terry had been living in Vancouver for the past 10 years. He is all about the music in a most loyal fashion. Marph works in a land fill. He drives around on a motorcycle with a trailer and two dogs under impossible driving conditions, sleeps between a tree stump and the fallen oak tree, and survives through the things the land fill supplies. He is the philosopher of the group. Terry Robinson has had a life of drug dependency, although now celebrates the fact that Vancouver has legal shooting galleries. He has played music all of his life.

Groupoem’s music is imaginative, poetic and inspiring, with a rhythmic sincerity full of energy and power. They wish to get their music out and establish themselves as the breakthrough alternative rock band that they are.

Louder Than War: Darren I hate to ask you this as a first question, but what is Terry’s story? He seems very interesting, yet a bit unnerving.

Darren: It’s a pretty interesting story. Trying to speak in an unbiased way as possible, I’ve been a part of a lot of great music in my life, and when I first met Terry and discovered his music, I qualified him is being right up there with the world’s fastest songwriter and natural guitar players. When I say that I refer to all these fantastic artists. He’s just kind of like one of those people that never got out there the right way, never got recognized and discovered. His life has been so filled with turmoil that it’s been difficult to pin him down to get this work done with the band. All the material that he does, like the stuff that we’ve presented on this album is very diverse, it has a special sound if its own. Nobody does it sort of like we do, it has a certain quality to it.

What is your major goal for the band?

To get the band enough exposure for people to experience the song writing, incredible guitar playing, the sound, the music, the vocals and lyrics. We are hoping with enough reviews and airplay with our new album Dirt Church we will be able to get back in the studio to work on our next album and get out, play live and tour everywhere.

What the difference in the band now, than 25 years ago?

Same guys, same heart, in some cases less hair, but the commitment is no less. Our music has always been changing and evolving from one song to the next whether it be days, months, or 25 years.

What are the biggest challenges you face getting your music out there?

While The opportunities are greater with online networking and sharing, I think it’s a bit of an information media overload sometimes, making it harder for people to personally connect with your music. However we believe if people listen to Groupoem’s music, that can be changed.
Groupoem’s music is imaginative, poetic and inspiring, with a rhythmic sincerity full of energy and power. They wish to get their music out and establish themselves as the breakthrough alternative rock band that they are.

So you were together years ago, correct?

Marph, tell me about the music.

Marph: Terry writes it all pretty much. I try to sing and interpret his lyrics. I like to think of myself as redneck, white thrash, blue smoke, red white and blue…I came up with yuppie-neck. Does that work? It works here, Canada is behind the rest of the world. We have this thing where we claim to be nice, but it’s a vicious nice.

Where you born and raised in Vancouver?

No, I was born in Cambridge Ontario but gravitated towards Toronto after we heard the New York Dolls. They are astounding. Those songs are so sensitive.

As you know I can’t sing, but that doesn’t stop me.

No, I think that you’re a really good vocalist.

Oh I don’t know. What do you think of Pearls? I tried so hard. The other songs I sing are quite a bit faster. I wasn’t too concerned with the singing, I was just trying to make the diction clear so I could get the lyrics properly. I didn’t do a verse-chorus thing which annoys Terry. He works hard at making a verse-chorus but I like to just have a shit load of lyrics to pick from.

So you and Terry don’t always get along?

I know Terry since he was 17. He was kind of down in the dumps and we kind of adopted him. The guitar playing sucked me in.

So you live in a land fill, Terry and Darren do what they do, how are you going to get the music out there?

Well I guess we’re going to rely on this interview and hope that you get it out there. Let this open so many doors for us and we won’t have to sell our blood anymore. Can you title it The Obnoxious Mystery?

How does this all fit into the music?

You know how ideas come into your head? I’ve got so many influences and so many things inspire me, like the New York Dolls. Sometimes stuff cones pouring into your head and you write it down, and it’s fun to say that stuff. It’s about having as much fun as you possibly can.

Terry give me a little background about what the band and you are doing.

Terry: Well what I’m doing and what’s happening with the band is two different things. I’ve just been doing this my whole life. I’ve arranged songs since 1974. I had a guitar and that’s all I had, so that’s what I did. I kind of keep running into Darren. I ran into him 25 years down the road. He is the one that keeps wanting to put it into a business and a band and stuff, but I’ve been writing music my whole life.

What do you hope will happen with the band?

A fist full of a lot of money. That would be nice. I’d like to be able to go to the states and back. I haven’t been in trouble for about 10 years, but I just can’t cross the boarder.

What genre would you consider your music?

I had a name for it the other day, but there’s no name for it. You  can call it ‘binge’. The best stuff comes when I’m on a binge, when I’m playing a lot.

What do you do besides music?

I use to take kick boxing, but that was 20 years ago. Just get into trouble a lot, but I don’t do that anymore. Basically what I like to do is be able to rehearse and practice. We’re going to be able to do that, we’re just kicking up again. There’s always a wrench getting thrown into the works.

I think I reinvented the guitar. I got a tuning that gives you a total octave advantage. Everything I’ve done on the guitar, but I think the people who appreciated it were more like cult type people. I’d like to be on the Guitar Prime Magazine. I don’t really care much for anything else.

Do you write your own music all the time?

Yep. I have ADHD, so it’s easier to learn it.

What song best describes your life!

There isn’t one long enough.

How do you want to be remembered?

On vinyl not CD.

I liked Muhammad Ali. I was a major fan of Muhammad Ali. I liked Jimi Hendrix, and Alice Cooper, his first band. Then he started to go off like David Bowie, and it wasn’t his genre, it wasn’t really him. He became an artist, that’s what screwed it up.

If there was anything that you could promote for yourself, what would it be?

I don’t know why people have to have millions and billions of dollars. It’s about how many kids die every minute from not having clean water. I just would like it if people would level off. If everybody could have what I have, the way I live, my expenses, then nobody would be a millionaire. I hate money bags. I hate the Donald Trump’s. A lot of us feel like that up here, we can’f figure out why he is still alive. We look at Martin Luther King, the Kennedys, and here is this trick just walking around.

Well, you get paid. You find out you’re not doing it for just a joke, and that these are all people who support what you’re doing. I like to get drunk afterwards.

No not really because I don’t want to end anything yet.