American Indie favourites Grouplove returned to London with a new album. Keith Goldhanger went along to take photo’s and wave his arms in the air.

Grouplove are back in business.

After a short break making a new album and getting used to the arrival of lead singers Hannah and Christian’s new born child, this LA-based band are back on our shores this evening, back in Camden Town London and  they’re here to spread some joy to the folk in attendance that have become accustomed to such entertainment when placed in the same room.

We get over an hours worth of tunes we already know so well, a Beastie Boys cover and a bunch of tunes we’re slowly getting smitten with from the recently released third album ‘Big Mess’. Front man Christian Zucconi declares his appreciation of the reaction these tunes in particular are receiving this evening to an audience that seem as on fire as the band from the moment they enter the stage and Christian disappears into the front three rows, right up until the closing moment of debut ‘Colours’. 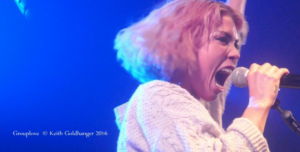 Christian’s vocals, alongside his partner Hannah Hooper are what make this band such an enlightening experience.
Short sharp catchy pop tunes, a lot of jumping around, hands in the air and clap-a-long moments, no guitar filling interludes, just a collection of joyous tunes that we get back to back and appear as much fun to perform as it is for us to experience on the dance floor. They look as though they’ve not been without each others company for more than ten minutes since they first met and we’d not be surprised if they’ve not been more than an arms length away from the tools of their trade either. They just feed off each others energy and inspiration , everything flows naturally, the songs are simple, straight forward and ooze the passion they must drink in from each other on a daily basis. In short, a bit like Abba were in 1977.

We’re all totally out of breath by the end of this. They probably sit in their dressing room puffing and panting for an hour or so before picking up their guitars to carry on finishing the tune they probably started writing just after they got out of bed in the morning.

Grouplove are a fun bunch of inspiring people to be in the same room as and with a current sound track such as what we hear this evening to accompany their lives, they’ll need that young child of theirs to get some dancing shoes fitted before term begins and to get prepared to experience some very exciting school holidays in between future studying and parents recording commitments.