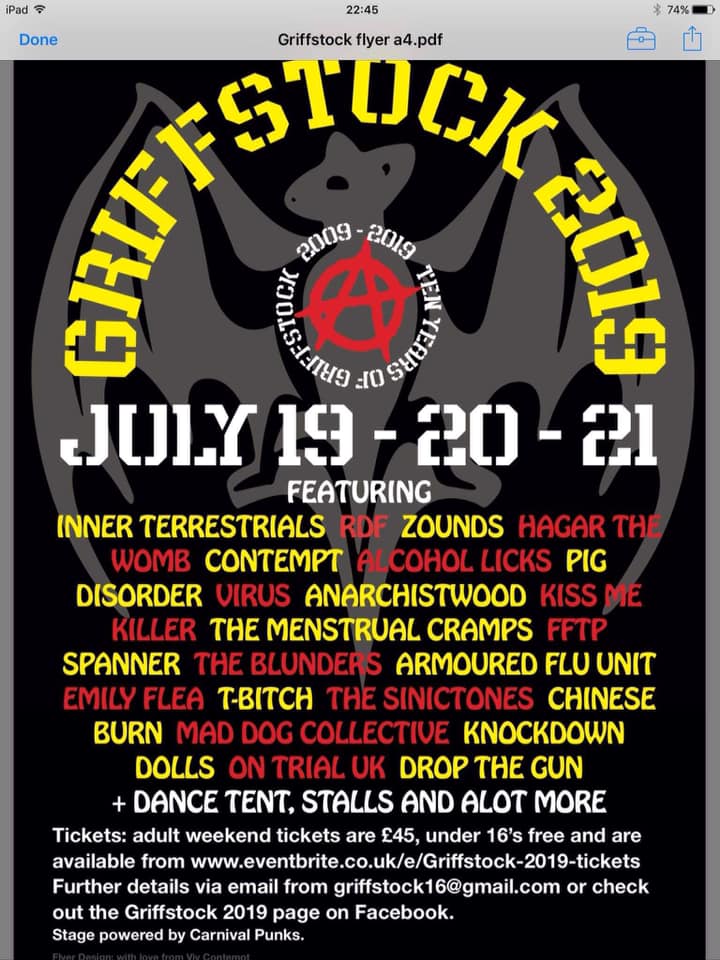 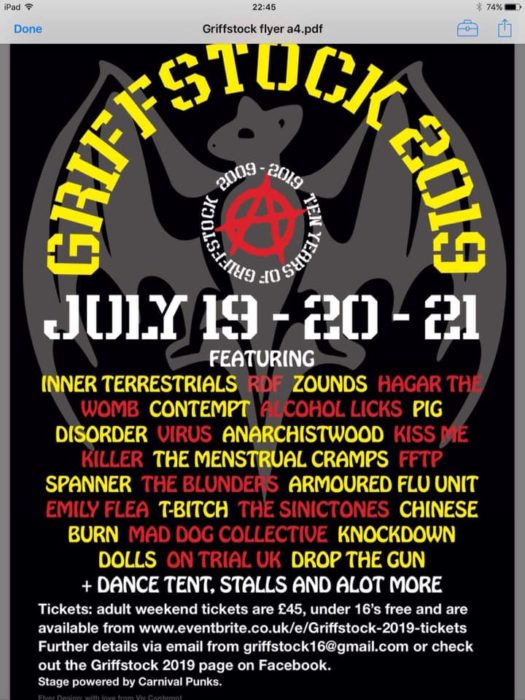 This looks like being the cheapest, and one of the best 3 Day Punk Festivals this year, in the UK, says Ged Babey for Louder Than War.

The real deal, D-I-Y, activist, pacifist, bands who do this because they mean it.  ‘Powered by’ the Bristol-based collective  Carnival Punks.  The line up includes Veterans and Young Guns. And a healthy number of female and mixed gender bands.  This isn’t yer average macho punk-as-fuck  festival.

Not sponsored by a brand of trainers or magazine this is the sound of the Underground going overground, (wombling free…) Protest and Survive, Fuck the System, Hug a Tree, Dog on a string, Krusty Jugglers …. yeah it’s easy to take the piss, but I love a whole batch of these bands, who make some of the most uncompromising and interesting and fresh and vital punk rock you will ever hear.    This is s a cheap and non-commercial festival by punks -for punks – so I’d urge you to go along and have a fuckin’ blast.

Here are my ten personal picks, which include bands I know and love -and some I’ve never seen –  but the sheer variety on offer is amazing.   It’s followed by the full line up and details of the event, which closes with the words;  RESPECT / UNITY / COMMUNITY/XXX

The original Crusty Punky Reggae band who formed in 1986.

Day-glo punk-art subversives – one of the most striking and original punk bands for many a year.

Birmingham hardcore/anarcho mainstays – featuring guitarist the irrepressible Sam who is also in Alcohol Licks and the Balsall Heathens with Jock from GBH.

South Coast veterans but a new-ish band – somewhere between Discharge and Conflict.  The singer does a bit of writing.

Female-powered protest/feminist punk rock isn’t a new thing… and Hagar The Womb are arguably even better with age.

Babar Luck is just such a beautiful human being and inspirational performer despite his ‘mad eyes’ and Islamic Raygun beard.

The new breed of deadly-serious but out-for-a-good-time personal/political punk bands.  The Menstrual Cramps are the bastard love children of the Spice Girls and Crass…. kinda.

Made some great, classic records.  Live, can be unpredictable and wayward, but flashes of the old greatness.

‘Brand leaders’ – but to be completely honest, have never seen them or heard much by them.

I know that my friend Nath – Armoured Flu Unit/Haywire rates this lot highly and he knows his punk rock onions.

Here are the details….

BANDS AND PERFORMERS CONFIRMED SO FAR: