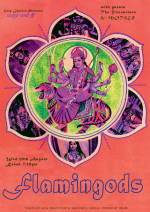 Grey Lantern have been promoting a monthly series of gigs in Manchester at Kraak Gallery promoting the interesting and the left field, proving that the independent spirit is still very much alive in the city.

For full details on their monthly event please go to the Grey Lantern website.

Meanwhile their next event is on Aug 20th

Grey Lantern are delighted to present Shape Records’ Flamingods as they tour in support of brilliant second record Hyperborea!

Hyperborea was written after new Visa laws forced Kamal out of the UK. As such, the album deals with themes of identity, belonging and alienation whilst also day dreaming of leaving to foreign far away lands such as the mythical island of Hyperborea. The album was made with none of the band members in the same room, sending audio files back and forth across the internet.